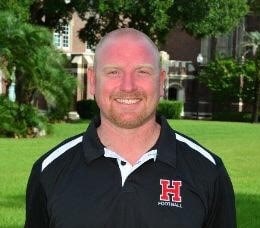 BROOKSVILLE- Over a week has passed since Rob Kazmier stepped down as the program’s head football coach and the Leopards identified and zeroed in on their guy moving forward.

Hernando High School announces via its athletics website that they have named Hillsborough High School defensive coordinator Earl Garcia III as the school’s new head coach. Garcia takes over for Kazmier, who stepped away due to family reasons.

Kazmier joined the Leopards after stints at Nature Coast and Weeki Wachee as an assistant coach. As Hernando’s head coach, he was able to take the Leopards back to the postseason in 2018, bowing out in the region quarterfinal round. In 2019, it was a little bit of a rebuild for Hernando but a few bounces here and there could’ve easily seen the Leopards right back in the playoff picture. Hernando finished 5-5 in 2019.

The program seemed to likely have a plethora of candidates around the Tampa Bay area, with a couple on staff assistants that could have been in contention. Assistants Dwayne Mobley and Mark Lee, who also is the athletic director, have both been head coaches in Hernando County in the past.

According to the press release given by the school, Garcia III comes from being the architect of a Terriers’ defense that averaged only allowing 14 points per game and pitched 25 shutouts in 85 games when he was the defensive coordinator. Hernando High principal Leechele Booker voiced her excitement for Garcia III accepting the offer to be the next head coach.

“I loved coach Garcia’s energy, passion, vision, and determination to get our football program to the level we want to be at,” Booker said. “We are happy to welcome coach Garcia and his family into the purple and gold family.”

Garcia III comes from a family bloodline that is embedded into football coaching, as his father Earl Garcia is the head coach at Hillsborough High School. Garcia Sr. will be entering his 41st season coaching and has compiled an overall record of 203-59 and was named coach of the year in 1993, 1999.

“I am excited for the opportunity to get things rolling,” Garcia III said. “We are going to do some things different on and off the field and can’t wait to get on campus to get the process started. I have heard nothing but good things about the Brooksville community and the support they have for the high school. We are very excited to get involved and be a part of the tradition that has been established in the community and at the school.”