Still Tending her Garden at Eighty-Nine Years of Age 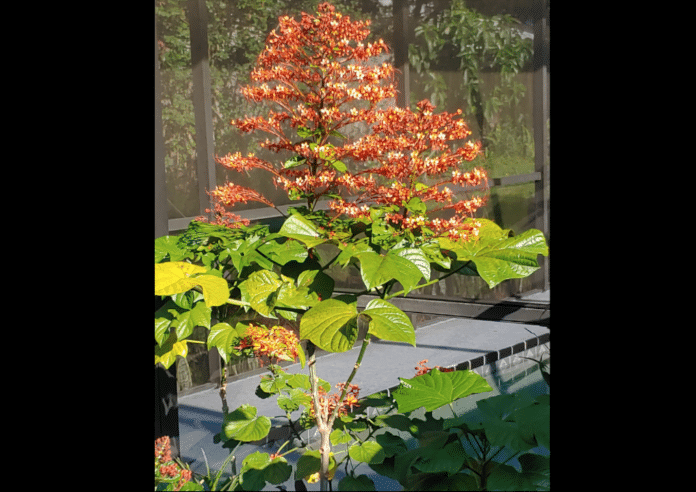 At age eighty-nine, Benedita Vaz (“Dita” to her friends), looks at least ten years younger and has the energy of someone half her age. She wakes up every morning at about 5:00 and is in her garden by 7:30 tending the many varied plants that she grows there. The avid gardener takes cuttings, roots them and then transplants the cuttings. Benedita avows that the secret to her “green thumb” is talking to the plants.

“I tell them how beautiful you are,” adding, “God is everywhere.”

Her love of gardening began when she was a young girl in Brazil. Born in 1930 to a Brazilian mother and a Portuguese father, Dita was the eldest of seventeen children. During World War II, they grew squash, corn, lettuce, tomatoes, and other vegetables because of food shortages. At the age of fourteen, she had to drop out of school and go to work in a factory to help support the large family.

She describes herself as a “people person” and before the pandemic, Dita loved to go to her clubs and socialize and make monthly trips to the Hard Rock Casino. In previous years, she would go on bus trips all over the place. She also volunteered at the St. Vincent de Paul thrift shop. Now, she never leaves her house. Her daughter, Bernadette, brings her groceries. She doesn’t sit idle, though. Benedita crochets items for her five children, nine grandchildren and two great-grandchildren. She also enjoys reading.

“There is no time to be sad,” Dita remarks.

She practices the art of gratitude.

Positivity is another one of her traits, no matter how dark things may seem.

“Think of something good in your life. Don’t bring yesterday to today.”

At the age of eighteen, Benedita emigrated to the United States. Her aunt and uncle in Rhode Island sponsored her. She found a job and continued working even after she got married. Her jobs ranged from working in a Uniroyal tire factory and for Hershey Chocolate to being employed by the Timex watch company.

Benedita met her husband at a Portuguese club and they got married in 1953 when she was twenty-three years old. Together they raised six children in Connecticut. The couple moved to Spring Hill in 1993 after their children were grown. Dita’s husband passed away in 2002, but she faced this new phase of her life with a positive attitude. “Never look behind, always look ahead” is her philosophy.

In August, Dita will reach a milestone when she turns ninety. She’ll receive the usual congratulatory messages from her family and friends. However, before they are even awake, she will have had her coffee, thanked God for her blessings, and discovered what new life has emerged overnight in her garden.