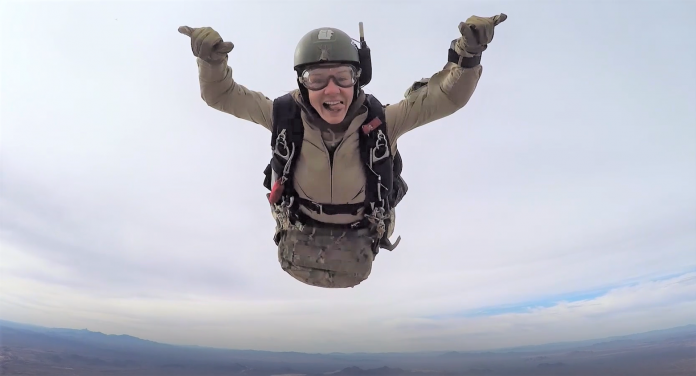 The Fourth of July holiday is the perfect time to honor local heroes–and heroines. Spring Hill native Shelane Etchison is one of six Floridians recognized by the Pat Tillman Foundation (PTF) as a 2020 Tillman Scholar. Founded in 2008, the Tillman Scholars program supports our nation’s active duty service members, veterans and military spouses through investment in their education and professional development.

“After spending years in some of the world’s worst conflict zones, to me, the 4th of July is an opportunity to reflect and be grateful for America’s key founding tenets of life, liberty, and the pursuit of happiness.  It’s a time for perspective-taking and realizing the American experiment is something special, whilst recognizing our historical and future progress needs to make American values work for all,” Etchison remarks.

In recognition of their exemplary service and leadership potential, Etchison and other PTF scholars will receive scholarship funding to pursue higher education and progressive service in the fields of healthcare, business, law, public service, STEM, education and the humanities.

This is the latest in a long line of accomplishments for Etchison, a Major in the United States Army who served in Special Operations and Military Police units leading security, intelligence, and logistics operations. A veteran of the Iraq, Afghanistan, and Syria wars, in addition to serving an assignment at U.S. Embassy Ankara, her key accomplishments include selection for two highly competitive Special Operations Programs; one of which assigned her as the first cohort of women to complete combat deployments with the 75th Ranger Regiment in Afghanistan.

Yet before Etchison became an American hero, she was a Central High School student and tennis star who had not at all planned on a career in the military.

“I was introduced to the military through Central High’s NJROTC program.  The program was only one year old when my best friend pressured me to join with her in fall 2001 of my sophomore year.  I did not come from a military family and I felt out of place in NJROTC,” she said. “I wanted to withdraw from the program after the late Chief Wendell Dey made us do push-ups on the first day of class.”

All of this changed–on the day that the world changed.

“But then September 11th happened,” she said. “I believe the events of that day struck me differently having to process them in the company of the NJROTC instructors.  Although they were poised, it was clear their anger lay just skin deep and would have given anything to not be retired so they could avenge the attacks.  There was an unsaid feeling it was now incumbent on us, the next generation, to answer the nation’s call of military service on behalf of those who could not (this sentiment rings incredibly true for Pat Tillman). I watched more and more Senior NJROTC students going to the recruiter’s office to enlist upon graduation and fight this new war on terror.  Since that school year, I never shook the notion that I, too, should join the fight.”

And as a part of her commitment to join the fight, Etchison joined the Army.

“After graduating from UCF in 2008, I commissioned through ROTC as an Army officer.  I deliberately joined a war-time Army to contribute as much as possible in conflict zone settings (despite women at the time still being technically banned from combat),” she said. “I specifically sought out jobs in Special Operations that would afford me opportunities to be as involved overseas as much as possible.”

And in making this move, Etchison also made military history.

“I first deployed to Ramadi, Iraq, as a platoon leader and company executive officer with the Military Police.  Upon my return from Iraq, the U.S. Special Operations Command announced a pilot program especially assessing and selecting women to deploy with the 75th Ranger Regiment and Navy SEALs on combat missions in Afghanistan to gather critical information from Afghan women on Taliban and Al Qaida targets,” she said.

“Believing in this mission and hungry for a challenge, I was selected as the inaugural cohort of 20 women to deploy.  I deployed to Helmand, Afghanistan, with the Army Rangers and contributed vital information on high-value targets.  My CST colleagues and I are profiled in the New York Times Bestseller, Ashley’s War by Gayle Tzemach Lemmon.  The book is an ode to our teammate, 1LT Ashley White, who was killed in action aside two Army Rangers.”

This course of military service took Etchison around the world.

“Following CST, I was motivated to continue serving in Special Operations and applied for a highly competitive Special Missions Unit,” she said. “After completing this unit’s multi-year selection and training process, I subsequently deployed to Syria, Turkey, and Europe.”

During her time in Syria, Etchison gained a whole new understanding for the situation of women around the world.

“In Syria, I was impacted deeply after working with the Kurdish female fighters combating the Islamic State,” she said. “Witnessing the resilience and resolve of these women to take up arms against their ISIS oppressors was extraordinary.”

“It seems paradoxical, but that experience was what motivated me to leave the Army to pursue opportunities (with more autonomy) to continue supporting the Kurdish region in Syria,” she said. “Specifically, I am interested in exploring ways to help the region via economic development – this is why I’m pursuing an MBA from Harvard Business School and an MPP from the Kennedy School: to build a base of knowledge and coalition of support for bringing economic opportunity to conflict zones.”

Etchison credits the Tillman scholarship as a milestone–as well as an inspiration.

“The transition from Soldier to student-civilian has been challenging, which makes the honor of being selected as a Pat Tillman Scholar incredibly precious to me.  Being a Pat Tillman scholar is so much more than a scholarship – it is entry into a community of veterans and military spouses committed to service and leadership,” she said. “The caliber of people in this community is truly humbling, and I am grateful to have the support of the foundation to bring meaningful economic impact to conflict zones.”

“I cannot say enough good about the legacy of the original founders of Central’s NJROTC program: LTC Michael Ralph, Master Chief Bruce Kennedy, and the late Chief Wendell Dey.  They provided superior mentorship and support to so many youths at Central. The program was a cohesive family and a melting pot of all kinds of students,” she said. “They never pushed military service on anyone, but rather instilled the honorable values of military service into us.  What I probably admired most was their propensity to elevate and empower the teenage girls of Central — the program was half (if not more than 50% girls) and they taught us to embrace self-respect and confidence.”

Shelane’s mentor and Central NJROTC Co-Founder Michael P Ralph LtCol, USMC (Retired) has this to say about his former student:

“Shelane was a blue chip student leader/athlete who was rare to find in a small high school setting not to mention a newly formed Junior ROTC Program.  She joined as a sophomore in our second year of existence and contributed immediately!  She excelled in ROTC and climbed the ladder to Regimental Executive Officer her senior year and was the part of the driving force that catapulted the program to National recognition in the years following her graduation (CHS was recognized as the #2 Program in the Nation in 2005 and the #1 Program in the Nation in 2006)

“Her selection for the 4-year Army Scholarship to UCF was well earned and propelled her toward her commission.  Once on active duty, there was no doubt that she would achieve recognition for her leadership skills.

“I along with Master Chief Bruce Kennedy, USN (Retired), and the late Chief Petty Officer Wendell Dey, USN (Retired); have always been extremely proud of Shelane.  I personally, can’t wait to hear about her future success!”

And now, Shelane Etchison wants to pass it on.

“This is something I continue to be passionate about,” she said. “Getting more women and girls to consider military service.”