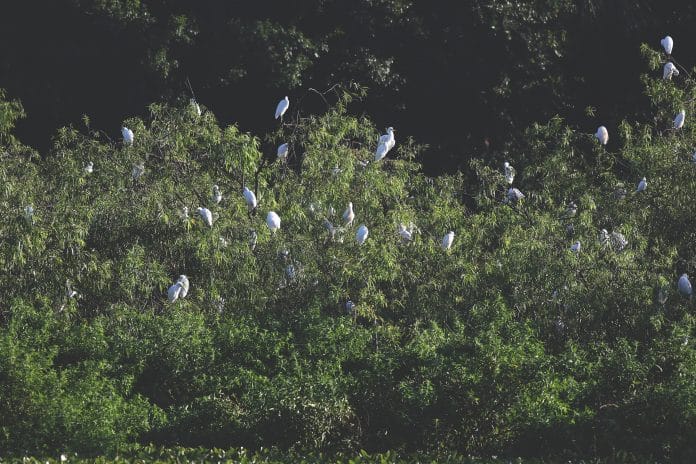 In our previous article, Bev and I hiked the trails in the Withlacoochee State Forest seeking out woodland birds, and now it is time to explore a different type of habitat. For this adventure, we met up with Hernando Audubon member Claudia Amsler at a rookery on private property in southeast Brooksville.

Where the white birds wander says it all. This private location is an excellent example of a landowner’s hard work, passion, and continued conservation efforts. The property contains a wetland habitat that provides a haven for many varieties of birds and hundreds of other species of wildlife.

A rookery is a habitat where several species of birds, such as egrets and herons, congregate to nest and raise their young. The location of a rookery is more likely to be near or surrounded by water in different areas, from swamps to retention ponds.

“When it’s nesting season, it’s genetically programmed that they (most egrets and herons) have to nest in big concentrations,” said Hernando Audubon President Bev Hansen.

As we walked towards the rookery near the lake’s edge, we spotted Cattle Egrets, Snowy Egrets, Tri-colored Herons, and Little Blue Herons nesting in the Carolina Willows. The Cattle Egrets dominated this particular rookery.

However, over a century ago, herons and egrets were facing extinction because of a fashion trend, as Bev Hansen explains.

By the late 1800s, many herons and egrets were greatly declining in population due to millinery trade, which made attractive hats with feathers for women to wear. They captured breeding adults in a nest (leaving chicks to die). It is estimated that 130,000 herons and egrets were slaughtered for the hats made in London in a 9-month period. Two Boston socialites, Harriet Hemenway and Minna Hall, began the revolt, which led to halting this slaughter. This led to the formation of the National Audubon Society and the passage of legislation, culminating in the Migratory Bird Act of 1918, which now protects native birds.

Cattle Egrets are native birds in Africa that have widely dispersed to many parts of the world. They were found in northeastern South America in 1877. They were first seen in Florida in 1941, photographed in 1952, and seen nesting in 1953. They have dispersed to all of the lower 48 states and into parts of Canada.

At this rookery, it’s hard to tell who’s who in the clusters of white-feathered birds.

The adult Snowy Egrets have black legs and yellow feet. The adult Cattle Egrets have a brownish/tan tint within their feathers around the back of their necks, and the juvenile Little Blue Herons are all white with a bluish/gray beak, but the adults are all blue.

As the babies grow, changes in coloration will happen with a few of these birds; for example, the young Little Blue Herons’ feathers will change colors from white to blue. It will take up to a year before they turn all blue.

“They (Little Blue Herons) are quite pretty when they start changing,” Claudia said.

But the pondering question that came up as we observed the rookery was, how in the world do the parents know which babies are theirs?

For the answer, we consulted Marianne Korosy, Ph.D., Director of Bird Conservation with Florida Audubon.  She explained via email that wading birds recognize their offspring primarily by their calls, which must be subtly different from the calls of other adults’ offspring. We can’t hear those fine differences.

It is quite remarkable to observe rookeries and see how each parent takes on their role in nest building and raising their young. From their natural instincts to build a stable and supportive nest of twigs to when the chicks know it’s time to leave the nest may intrigue others to learn more about birds.

It was a great experience to observe this rookery and a place that will hopefully be there for a long time to come.

The Hernando Sun will also keep you posted.