A Luminary in Life & Journalism 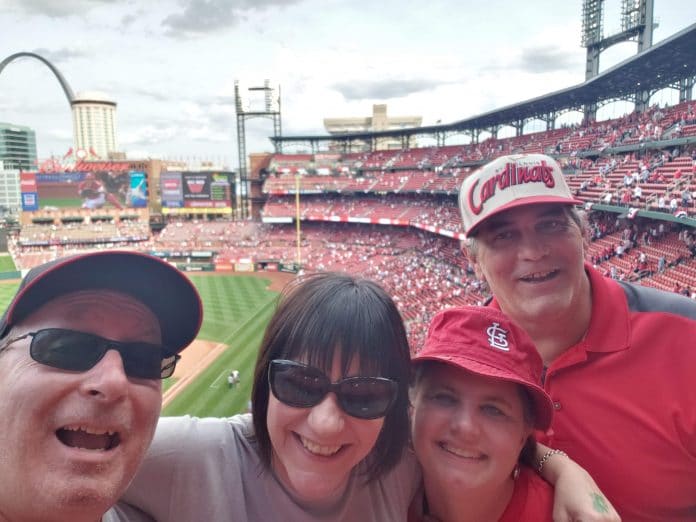 Whoever came up with the phrase, “You can’t be all things to all people,” never knew Mike Konrad. This luminary of the Tampa Bay journalism scene and noted Brooksville resident passed away July 16 at Oak Hill Hospital in Spring Hill. He was 64.

In my seven years as a correspondent for the Pasco bureau of the Tampa Bay Times, I am proud to say that I knew Mike Konrad, who served the newspaper for 30 years and retired in 2018 as the editor in chief of both the Hernando and the Pasco bureaus. He was at once an exceptional editor and an even better person, guiding my work with a gentle, experienced hand while at the same time always challenging me to be my very best.

The words “Best Wishes”, in fact, were the final words that Mike ever typed to me, when in an email written soon after his retirement he offered to give me a reference and any other help he could provide. These same words graced the birthday card that Mike sent to his dear friend Nancy Weil during their final correspondence, days before his death.

Even as he fought for his life, battling the dire effects of COVID-19, Mike still made sure to send his friend a birthday card–one emblazoned with the wish that, someday, they would see each other again.

“We were such tight friends, he was like my brother,” said Nancy, a reporter who first worked for Mike in his native Illinois and later at the Times. “He was a great editor who showed a level of creativity often lacking in the mainstream press.”

Nancy said that Mike’s rock-solid support saw her through a divorce, a happy remarriage and a fledgling music hobby–indeed, Mike played clarinet for the Hernando Symphony Orchestra and was also an avid baseball fan, traveling with her and other friends to every major ballpark in the nation and never forgetting to buy a souvenir for her daughter Isobel.

Mike also ‘went places’ as a journalist, at one point standing in the White House rose garden to interview President Jimmy Carter as a part of a story about the National Spelling Bee competition. Also with an eye toward education, he oversaw the work of dozens of journalistic interns annually at the Tampa Bay Times.

“Mike was the first person to turn to when I had questions or wanted to try out a new product,” said photographer and tech expert Debbie Wolfe, a former technology training editor at the Times. “He mentored everyone and never had a cross word to say about anyone.”

Michele Miller, my school page editor at the Times who is herself a Tampa Bay journalistic luminary, agreed.

“Mike was a meticulous and hard-working editor with a passion for local news coverage and the local arts scene, which was part of my beat before being laid off in May. He was the kind of editor you want reading your copy because he made it better. Believe me, that does not always happen,” said Michele. “Mike was a kind and caring boss who saw beyond the contributions his staff could make to the newsroom.”

And, as is the case with so many of us, Michele came to see her editor as her friend.

“Whenever I saw him after his retirement, he would ask about me and how my family was doing first, before catching up with what was going on at the Times,” she said. “The last time I saw him was at a luncheon with colleagues and former colleagues. With so many people there, we really didn’t have time to chat, so we promised to get together later for a quieter lunch date so we could catch up. Then came the pandemic and I’m sad to say, that lunch date never happened.”

In addition to Michele’s lunch date, it seemed that Mike had so much more to do in life. Longtime friend Georgia De-La-Garza, a writer and activist, said that one of Mike’s last compositions was a press release that he wrote free of charge for an organization she supported, a grassroots movement to make the streets safer for young people, women and people of color. He had traveled overseas to do charitable work and wanted to do more.

“Mike was a role model of a human being,” she said. “He made you want to be a better person.”

In addition to planning a full schedule of ballpark visits across the country, enjoyed with Nancy and others, Mike aimed to once again fill the music halls of Hernando with his beloved clarinet music.

“Mike was a member of the Hernando Symphony as a clarinetist for over 30 years,” said Michele DiLuzio, HSO conductor.  “I was one of the 13 who started the HSO back in 1982 so when Mike joined I was already there as the principal trumpeter.   Mike moved his way up the ranks to become our principal clarinetist when I took over as head conductor in 2014.   Mike embraced this new role and became a wonderful section leader. I would often see him working with his section members before rehearsal and during the break.   Mike has been a featured soloist as well as having many solos within different songs.  He came to rehearsals early and was always prepared and stayed to help put all the equipment away.  He was always the first to show up to help set up the stage for each concert and tear it all down at the conclusion.”

“The Hernando Symphony is a family consisting of not only the musicians and our volunteers, but our loyal patrons as well and we are all deeply saddened by the loss of one of our own,” she continued.  “Mike was a kind and gentle man and a wonderful musician. Mike is one of the orchestra’s Gift of Music Sponsors so he will forever be tied to the Hernando Symphony.”

In addition, Mike’s brother Scott Konrad said that his brother willed the donation of his clarinets to the HSO. In the end, says Scott Konrad, Mike returned in true form to his journalistic roots; creating a bulletin-style email thread to keep people up to date about his illness and condition.

“He was a newspaperman until the end,” said Scott, adding that Mike asked him to continue the email chain when he became too ill to communicate. “Soon the thread spilled onto social media and I heard from hundreds of people. Hundreds of people who loved my brother.”

When my editor Julie Maglio–herself a fantastic editor and person–asked me to write a tribute to Mike Konrad, I gladly accepted–only I wondered how to capture such a phenomenal life, in a way that would do him justice.

In aiding this effort, Debbie Wolfe gave me some great advice.

“Just think of Mike as an angel on your shoulder,” she said. “Guiding your writing, as he always did.”

I have no problem doing that–not at all.

When asked how he wished to be remembered, Mike Konrad supplied the following statement; shared now by his brother, Scott Konrad:

“Mike was someone who believed that we are one human race…that no one should be subject to discrimination because of gender, sexual orientation, race, ethnicity, nationality, religion, or any other trait. He was a compassionate supervisor and mentor to numerous journalists that came through the Times Hernando office working their first-time newspaper job. He touched many lives.”