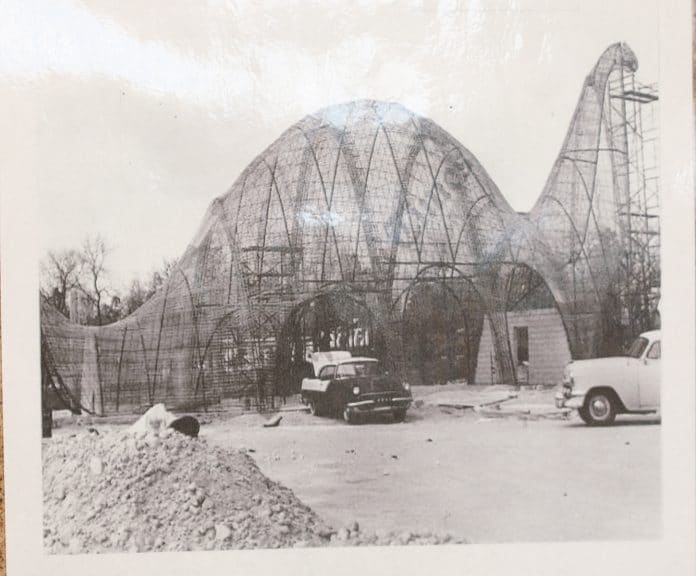 The building located at 5299 Commercial Way in Spring Hill takes the shape of a dinosaur character known as Dino, an “Apatosaurus” that stands 47 feet tall and is 110 feet long. And Dino is now officially listed in the National Register of Historic Places; an official list of the Nation’s historical sites deemed worthy of preservation.

“It is a pleasure to notify you that the National Park Service officially listed (the Sinclair Service Station) in the National Register of Historic Places on July 27, 2020,” read a letter written by Ruben A. Acosta, Survey & Registration Supervisor of the Bureau of Historic Preservation, Florida Department of State.

“It feels fantastic,” said Dana Hurst, who co-owns Harold’s Auto Center with mother Irene. “Our customers have been congratulating us throughout this process, and we appreciate them. They are proud of us.”

Dino (pronounced Dye-No) finds his origins in 1930, when the Sinclair Oil Co. used a series of dinosaur logos to promote a line of lubricants refined from crude oil–an element formed when dinosaurs walked the earth. It was Dino, a smiling Apatosaurus, that became wildly popular with audiences; so much so, in fact, that Sinclair registered him as a trademark in 1932 (https://www.sinclairoil.com/dino-history).

Through the years, Dino has appeared as a balloon in the Macy’s Thanksgiving Day Parade, and is now an Honorary Member of the Museum of Natural History. A fiber glass, animatronic version of Dino has appeared at the World’s Fair–and the precious prehistoric creature is available for purchase as a stuffed toy, an inflatable and even as a soap. And there’s a reason that the central family featured in the ’90s hit sitcom Dinosaurs was named Sinclair (https://www.sinclairoil.com/dino-history).

By the time the Hurst family acquired the Spring Hill ‘Dino’ building April 6, 1977, it had become a FINA Gas Station. Yet the building retained its original shape and structure, with the Hursts integrating its unique design into the marketing copy for their automotive repair business, Harold’s Auto Center.

“Located immediately adjacent to US-19 and one mile south of the popular Weeki Wachee tourist attraction, the service station was designed in an eye catching manner intended to attract the business of passing motorists and tourists,” the file reads. “One of few extant examples of Programmatic Architecture in the state, this Sinclair Service Station is an important remnant of Florida’s golden era of automobile tourism, in which road-side businesses utilized their buildings as a form of advertising.”

An example of Programmatic Architecture, according to the file, is a “Property (that) embodies the distinctive characteristics of a type, period, or method of construction or represents the work of a master, or possesses high artistic values, or represents a significant and distinguishable entity whose components lack individual distinction.”

The file also outlines the specific criteria that qualifies the structure for inclusion in the register.

“Property embodies the distinctive characteristics of a type, period, or method of construction or represents the work of a master, or possesses high artistic values, or represents a significant and distinguishable entity whose components lack individual distinction,” it read.

So beyond Dino’s past, what does the future hold? Well the building officially listed July 27 as the Sinclair Service Station in the National Register of Historic Places is now distinguished as one of eight Hernando sites to be named in the register. And, like other sites, Dino now will be eligible to receive special benefits:

“Consideration in planning for Federal, Federally licensed, and Federally assisted projects: — Section 106 of the National Historic Preservation Act of 1966 requires that Federal agencies allow the Advisory Council on Historic Preservation an opportunity to comment on all projects affecting historic properties either listed in or determined eligible for listing in the National Register. The Advisory Council oversees and ensures the consideration of historic properties in the Federal Planning process,” reads the National Register website at https://www.nps.gov/subjects/nationalregister/faqs.htm. “Eligibility for certain tax provisions — Owners of properties listed in the National Register may be eligible for a 20% investment tax credit for the certified rehabilitation of income-producing certified historic structures such as commercial, industrial, or rental residential buildings. This credit can be combined with a straight-line depreciation period of 27.5 years for residential property and 31.5 years for nonresidential property for the depreciable basis of the rehabilitated building reduced by the amount of the tax credit claimed. Federal tax deductions are also available for charitable contributions for conservation purposes of partial interests in historically important land areas or structures. Consideration of historic values in the decision to issue a surface mining permit where coal is located in accordance with the Surface Mining Control Act of 1977; and qualification for Federal grants for historic preservation, when funds are available.”

Dana Hurst’s immediate plans regarding the honor involve the framing of Acosta’s letter, to appear on the wall of the business. The letter that officially confirms what Hernando residents knew all along: Dino is a classic. And while our prehistoric friend had no official comment for the story, we can all agree that that famous smile says it all.

“On behalf of Secretary of State Laurel M. Lee and our historic preservation staff, I congratulate you on achieving this formal recognition of the historic significance of this property,” Acosta wrote. “We appreciate your interest in preserving this important element of Florida’s cultural resources.”