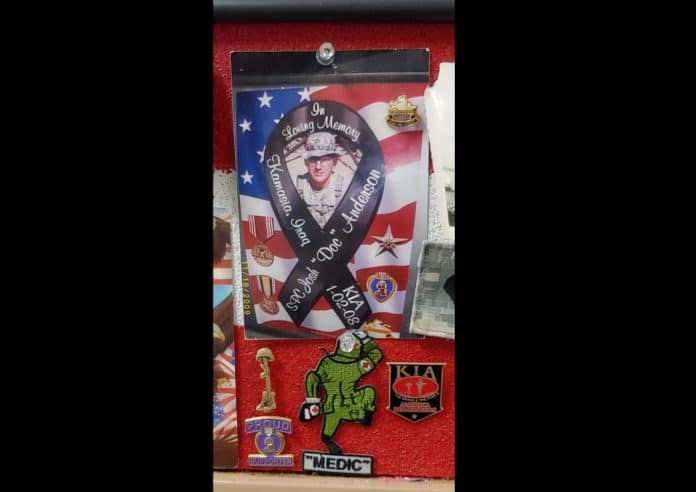 For the women of the Veterans of Foreign Wars Post 10209, their motto is not just a nice-sounding phrase. Their members actively promote the principle of supporting veterans and their families.

On Saturday, August 15, 2020, the local post hosted a district meeting attended by representatives from twelve of the regional posts that make up the district. At the meeting, they discussed business and upcoming events. Many of the posts were commended for their outstanding service in several areas.

Nancy Sellers, president of Post 10209’s Auxiliary, announced that their post received five awards at a recent “School of Inspiration” – a workshop that teaches auxiliary officers and trustees the duties of their positions.

The VFW Auxiliaries are not just about holding Bingos and suppers. This organization, made up of men and women who have or had a close relative that served in the military overseas, performs many acts of service to veterans and first responders, along with their families.

For example, they give grants to children of veterans and first responders. The organization’s members can also be seen on various holidays selling red artificial poppies to raise money for their projects. Much of the proceeds go to help the VFW National Home for Children in Eaton Rapids, Michigan.

As part of its Community Outreach program, the VFW Auxiliary members visit VA (Veterans’ Administration) Hospitals and also help to transport veterans to and from doctors’ appointments. Another project is Heroes on the Water, a program that takes veterans and first responders kayaking and fishing.

Throughout the year, the VFW Auxiliary sponsors essay contests and art competitions around a patriotic theme for school children and awards prizes.  Two contests coming up are the “Get Excited for the Red, White and Blue,” a National Anthem contest, and “Illustrating America,” an art contest for students in grades 1 – 8. The deadline to enter the art contest is March 31, 2021.

Teaching children about patriotism is an important mission for the Auxiliary.

Ms. Sellers, who is the Americanism and Patriotism instructor, organizes visits to schools to teach the children such concepts as flag etiquette, respect for the flag, the history of our National Anthem, etc.

“This is so important for school children to learn. Americanism is all about pride and devotion – pride in the United States and devotion to the flag and its traditions,” she states.

Handing out Certificates of Appreciation to businesses that show their patriotism by flying the flag and honoring veterans in other ways, is another important activity of the local Auxiliary.

Last week, Ms. Sellers and Gabriella Hieb, the District and Post Chaplain visited Doc’s Diner to honor the owners, Lynn “Mom” and Keven “Pops” Anderson. The Andersons opened the diner, located on Cortez Boulevard west of the Walmart Super Center in August of 2015.

They named it after their son, Joshua “Doc” Anderson, who was an Army combat medic killed in Iraq in 2008. He was just twenty-four years old when he died and he left behind his wife, Hannah, and their three-year-old daughter. Tragically, his daughter, Savannah died of a brain tumor when she was only eleven.

The Andersons recently donated a portion of their profits for one week, a total of $1,000, to the Auxiliary. The restaurant gives discounts to active military personnel, veterans, and first responders. In addition, their walls are covered in military memorabilia that customers have donated.

Lynn jokingly comments, “When we first opened the diner we wanted it [the theme] to be all Army, but then it sort of took on a life of its own.”

The members of VFW Auxiliary Post 10209 are busy right now planning for three patriotic holidays coming up soon. On Friday, September 11 the post will be hosting a ceremony to remember the nineteenth anniversary of 9/11. The event will take place at 9:30 a.m. at the post headquarters – 14736 Edward R. Noll Drive in Spring Hill.

September 25 is set aside to honor Prisoners of War and those Missing In Action (POW/MIA). Then the last Sunday in September is Gold Star Mothers’ Day that pays homage to the mothers and family members of those killed in service to our country.