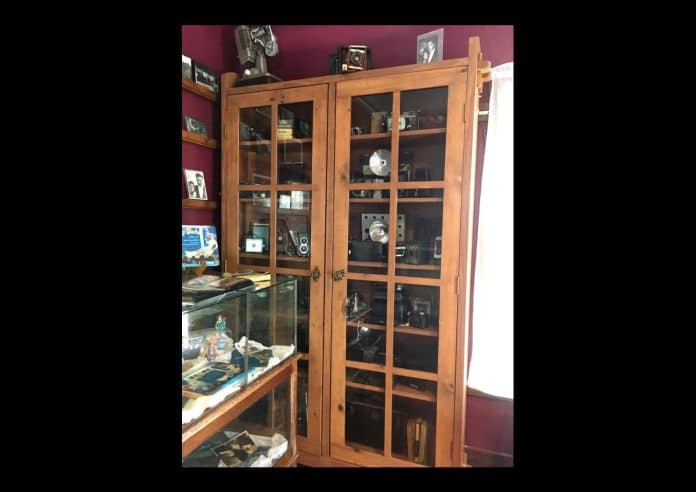 It’s worth the climb to the third floor of the May-Stringer Museum. You’ll find yourself in the base of the tower and at the entrance to the fascinating attic.

This small area serves as an exhibit space for a collection of cameras and photographs.  Professional photographers plied their trade during the Civil War. Soldiers often ’sat for their likeness’ so their families would have something to remember them by if they didn’t make it home from the War. Studio portraits were common after the War.

About 1900, Kodak introduced the Brownie box camera. The simple Brownie was soon found in almost every American home. That little camera recorded many of the photos of family gatherings and outings during the first half of the last century. The black and white photos were often clear and crisp.

Cameras used film and in order to load the film into the camera, the photographer had to go into a dark room or find some shade lest they exposed the film before it even got into the camera. The exhibit also displays some early, and now no longer used, flashbulbs, movie cameras, and other

The world changed when Polaroid came out with its instant photos! Now, cell phone cameras have changed the world again. All along the way, the camera, in the hands of a person who had some foresight, recorded history whether it was monumental, dramatic, or ordinary. We know more about the past because it is recorded in photographs.