When America Came Together 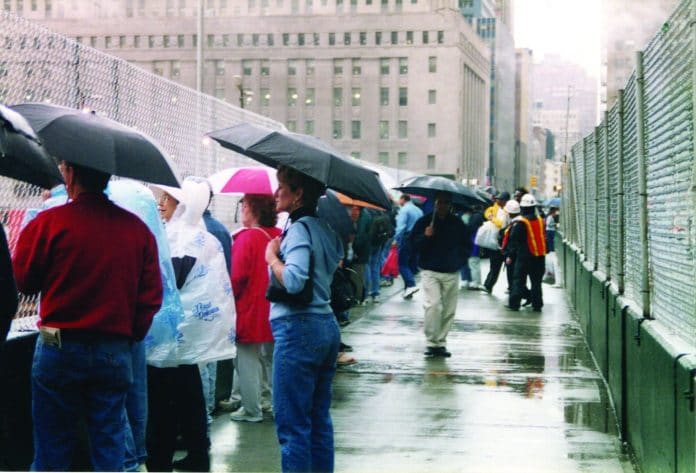 September 11th, 2001 was a time when America came together. People from all over the United States reached out to help one another. The attack on that day was meant to demoralize and divide us, but instead, it strengthened us as a country.

The attack changed many lives. People reevaluated what was really important to them and completely changed their lives. In Hernando County, there is a large group of people who moved here in part due to what happened on September 11th.

About nine months after 9/11, I visited Ground Zero with my soon to be wife, Julie.  She was starting an undergraduate BioInformatics summer research program at Cornell and we took the opportunity to spend a few days in New York City and visit with family on Staten Island.  The photos included in this issue are some of the photos that we took at the World Trade Center site.

Some of the photos are from St. Paul’s Chapel across the street from where the World Trade Center once stood.  St. Paul’s Chapel was relatively unscathed by the falling buildings. This was the church where George Washington prayed after taking the oath of office. The church became a shrine to the victims of the attack. Well-wishers sent their support in the form of paper cranes, gifts, cards, and banners which were displayed on the fence surrounding St. Paul’s Chapel.

Firehouse 10 near the World Trade Center also turned into a shrine of sorts. These firefighters were the first to respond to the World Trade Center and lost six of their “brothers” when the towers collapsed. Firefighters from across the nation sent their badges to show their solidarity with the New York Fire Department. The burned ladder truck from this station was buried under forty feet of rubble from the Twin Towers.

It is important to remember the events of September 11th on its 19th anniversary. Many young adults have no memories from that day and may not be aware of how after the attacks the nation came together in support of the victims. These shared experiences are at the core of our feeling of community.