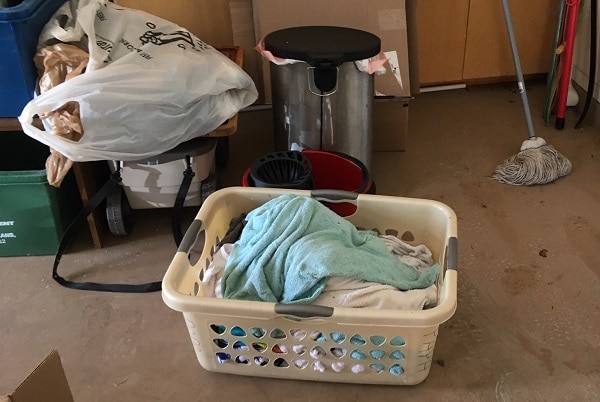 miniature tsunami flowing out of the kitchen into the dining room. I had a load in the

washing machine, so I figured it must be coming from there.

As I splashed through the kitchen in my slippers, one of my wife’s cats leaped in

through the cat door from the garage, did a cartoon running-in-place scamper for a

moment on the slippery wetness, and tracked washer water into the living room.

Sure enough, I found that the drain hose had come out of the wall and was emptying

on the floor behind the machine. That happened to me only once before, in Old House,

but the washer and dryer were in the garage, and while it was a nuisance, the water

water nobs, and hurried out to the garage to get my generic wet-dry shop-vac. In plain

sight were the container and long attachments, but I couldn’t find the flexible hose. So I

looked for the mop and bucket, but they were gone! I rushed out through my wife’s art

room because I remembered that she had recently mopped the patio, and naturally, her

dogs thought I was there for them, so they got to go outside for an early potty, and I

found the red bucket with the little basket for twisting the mop dry, but no mop!

I got the towels from my hall closet and threw them in the kitchen, and ran into our

bedroom for the towels in the master closet, and tossed them in the dining room. And

that’s when I text my wife about the situation.

She said the mop was in the garage next to where we hang the broom. I found it in

the corner next to the first shrunk, left of the broom, behind the pole saw, two recurve

to fit in the big blue garbage can. Hacksaw, I guess.

useless for absorbing lots of liquid, so while I kept trying to use it, I also went ahead and

rung the towels in the sink and put them back down. Did that five times, and so I know

exactly how many towels there were: nineteen. Not hand towels, but the big ones, bath,

Finally, when I had the hand-squeezed towels in my clothes basket in the garage and

all the ceiling fans spinning on high, Senor Cargador came by for coffee, cigs, and

Cricket. I needed the company and the break. (He’d rather I called him El Guapo, but I

just can’t, because he’s not.) I’ve been teaching him Cricket, but he refuses to learn.

Just before he arrived, I spotted the wet-vac hose. It was right where I put it months

ago, very well hidden, behind the big duct of the AC blower and my tall ladder that I

store next to it. Time to rearrange some things!

Later, and I’m talking two o’clock in the afternoon, five hours into it, I finally figured out,

after finding my reading glasses on the floor in the small hallway, how to make the

washer just rinse and spin. It’s a button that controls a line of options that I’d never

noticed before. Did that for the load that was in there, and afterward I spun the flood

towels before washing them. Like frogs in the toilet, I am now always going to check

After I dried and folded and put everything away, I discovered that I had missed one

towel in my panic, in the master closet, and also that there were three in the wash that

caused this crisis, so I now know that we have twenty-three towels: ten bath, nine

beach, and four my wife uses for her dogs.

Yeah, it was mostly a bad day. The kitchen and garage are in dis, the cats are

still exploring with their wide-eyed uncertainty about what’s going on, what with the

stand for the microwave oven rolled away from the wall, the large cutting board and

potato bin now drying out in the garage, as well as the kitchen rugs and clothes

hampers and the boxes of yard and kitchen bags. And of course, the dogs don’t care. I

let them back in around one, and they’re oblivious. I’m leaving the ceiling fans on all

And now I know another feature I want to add to my dream house, my Perfect Abode:

there will be a drain in the floor of the laundry room.