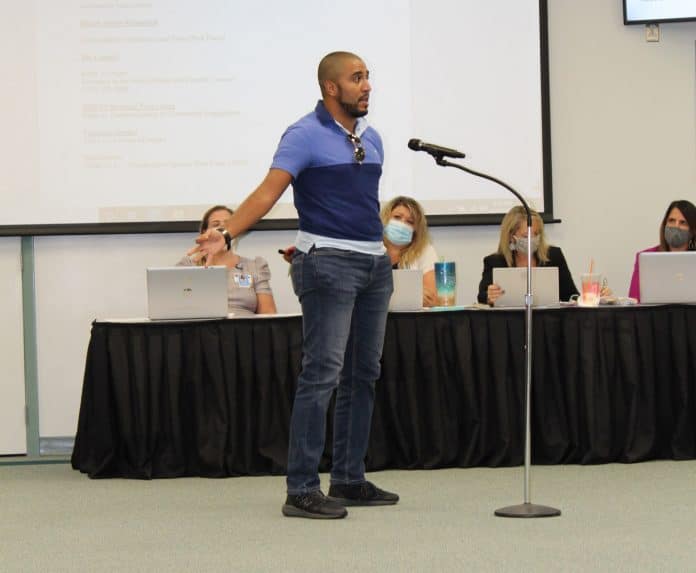 Public comment at the September 22nd school board meeting spanned several hot issue topics and went on for well over the hour that had been allotted.  Many commenters were passionate about their message and some exceeded the three minute time limit.

Some parents and students spoke about issues with the requirement that all on campus students wear masks. They spoke about how continual mask usage was leading to headaches and rashes. Some had switched to the facial shields but were still finding the shields uncomfortable. There were also complaints that some of the pictures of Governor Ron DeSantis’ visit to Springstead appeared to show him not wearing a mask while students are required to wear masks at all times.

Then there were speakers who spoke for and against bringing up the topic of Black Lives Matter (BLM) in the classroom. There were two instances that had been highlighted by Blaise Ingoglia on social media. One was a teacher who had a BLM slide as part of her meet the teacher discussion and Weeki Wachee High School students organizing an effort to wear black to school to support BLM.  There were speakers that postulated that this was a sensitive political topic that was better left to parents to discuss with their children. Other speakers felt that it was important for the teachers to discuss this with the students.

Another speaker mentioned the ambiguity of BLM being a hindrance to having a reasoned discussion about it. Is it a statement about the value of black life or an organization with political goals? Putting BLM in the proper context to have productive discussion would be extremely challenging.

A lady and her two sons in law spoke about how we need to see each other as people rather than dwelling on race. That God loves us all. One son in law was from Northern Africa and the other was from Puerto Rico.

Other speakers defended the Weeki Wachee High School protest in support of BLM. A student said that the environment was very supportive and no one could feel alienated. A former student felt that the teachers and administrators were under attack and sought to defend them.

A Pine Grove elementary teacher challenged the five board members to eat the school breakfasts, lunches, and possibly even dinner for the next week at school every day. His assertion was that school food was not what children need for optimal learning. He stated that if the board met his challenge and ate at the school for all those meals and still agreed that the food was acceptable, he would tender his resignation. However, he was hoping that they would work on improving the quality of the food.

There was a band mother who requested that the school district allow individual school bands or even principals to decide if they wanted to start playing again at public events and competitions.

A comment from a Moroccan gentleman by the name of Mohammed brought sentiments of unity to the room.  Mohammed explained that he came to America ten years ago and has become a US citizen.

“Under our flag, we’re all one,” he said.  We believe in one God. We never choose where we came from. When I heard the Black Lives Matter– I never understand that– what is that?”

He described himself as darker than anyone in the room.  He said, “I’m not black-you have to understand.”

He remarked that no matter what color or nationality someone may be– “We’re always supposed to be one.  Under one God, one nation.”

Many people passionately expressed their opinions. The school board was given many ideas and suggestions to digest.

Earlier in the day, the county commission gave school board member Kay Hatch several minutes during citizen comments to speak about the political and social unrest.  She referred to underlying systemic racism in which Black Lives Matter is a symptom of that struggle.  She said that community leaders are in a position to build community and need to address these issues.

“Here is Hernando County I believe our focus in building community implies that we have work to do… I look forward to responding to our collective call as we work together here in Hernando County the beloved community.”

County Commissioners told Hatch they were not in favor of controversial or politically charged material such as Black Lives Matter being taught in schools.  They said it can lead to bullying or indoctrination.

After citizens expressed their concerns at the Sept. 22 school board meeting, board members and the Superintendent responded.
Board member Jimmy Lodato stated,

“I made myself quite clear that all the things that are happening the community with his black lives matter is causing us a major problem and it’s going to continue to cause a major problem because it’s a bone of contention. I do not feel comfortable with it being taught in the schools. I have friends in law enforcement that have been injured, hurt.

“I am totally opposed to that being taught in the school…. As a board member I’m going to make myself quite clear. I realize that you have different opinions but I believe that school is for basics. It is for reading, writing, math. I don’t believe that politics has a place in our schools.

“I think we’re teaching what parents should be teaching and not what teachers should be teaching. I’m making myself quite clear. I am not happy with this. I wish you would look at it carefully because if discourse is going to be caused it’s gonna be much greater than we can ever imagine… This is not going to go away. Even after the election this will continue on and I cannot stand away from officers who have given up their lives to protect people. And these communities that have not backed them is totally disgusting.”

Board member Linda Prescott commented on both the masks and the Black Lives Matter issue.  Prescott says that she hears from an equal number of parents in favor of masks who say they would not send their children to school without them.  She also commented that the immediate accusation of guilt for the teacher who posted the Black Lives Matter slide was extremely concerning to her. They have investigations to determine guilt or innocence.

School board chair Susan Duval read from a prepared statement quoting an article she recently read.  In essence, her point was to say that it is crucial to listen to the experts when it comes to natural disasters or pandemics.

She read in part, “Our judgments are shaped by those around us. The communities that we are a part of play a huge role in how we interpret information. We are more likely to believe things that fit in with our existing world view or value system so information that does that becomes more appealing.  This can contribute to a belief in conspiracy theories or a disdain for expert advice. Scientists can only do so much to persuade us.”

“It’s pretty simple– we follow state statutes, we follow board policies and we teach the Florida Standards. We are not allowed to interject our own opinions or biases,” Stratton remarked.

“Please look at all of the standards, especially for your child’s grade level that tells you exactly what we teach in Hernando County, no different than the other 67 districts within this state.”

“As far as masks go, there will be a day, I believe we no longer have masks. We all certainly hope that day comes. We want that just as much as anybody else.

“Almost all of their competitions have been canceled is what I’ve been told– that may change. So we certainly don’t want to slight band in any way but we want to make sure we’re… keeping everybody safe and still trying to offer the opportunity the full opportunity for education.”