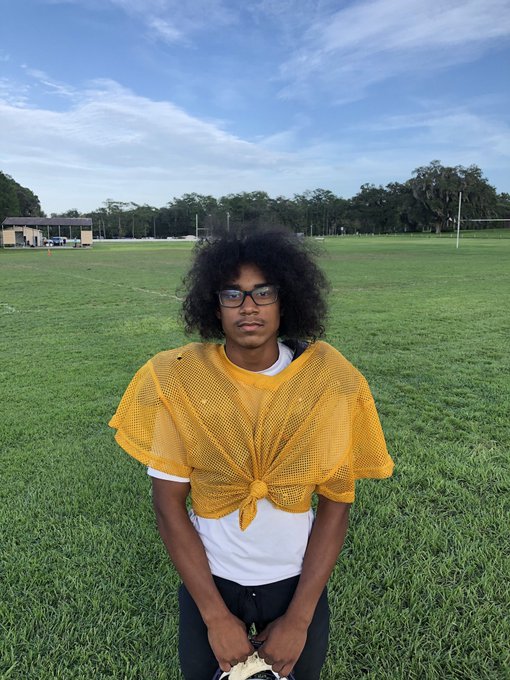 The season opener looked different this year as administrators, coaches, parents, and athletes came together adhering to mask and social distancing guidelines to attend and participate in the season opener for the varsity high school football season.  A moment many didn’t even think would happen for the 20-21 school year, and for some, it hasn’t yet. On Friday, Sept. 25, 2020, Friday night lights was underway as 4 of Hernando County’s 5 public high school teams took the field. Springstead Eagles’ opener planned away against Lecanto Panthers had to be canceled due to COVID-19. Hernando Leopards faced off against Crystal River Pirates for their senior night, walking away victorious with a score of 33-0. All eyes were on new Leopard Senior RB Contae Cason and he delivered in a big way.  His second carry of the night was a 68-yard touchdown.  In the first half, Cason also brought in a touchdown after a blocked punt by Crystal River and a 35-yard touchdown.

The Weeki Wachee Hornets brought home a victory over the Citrus Hurricanes with a final score of 25-0 and The Nature Coast Sharks delivering an upset to the Central Bears with an overwhelming victory of 60-0.

Although the stands might not have been filled with the usual numbers, it’s refreshing to see so many coming together to make this season happen. With much uncertainty in the weeks to come these teams prepare for their next battles. Hernando Leopards will face the Weeki Wachee Hornets at home, Central Bears head to Lecanto to face the Lecanto Panthers and the Nature Coast Sharks will host the Citrus Hurricanes.

More in football…
On Sept. 23 SHS announced that the 10/2 varsity football game vs Crystal River was postponed.

On Sept. 24 NCT Boys Junior Varsity Football beat Crystal River 35 – 7. The Sharks had a tough battle in the 1st half. Tyler Gonzalez was the first to reach the goal line for the Sharks which would carry them to halftime.

The Hornets played stifling defense all night leading to a shutout victory. Late in the 4th, David Richards ended the scoring with a touchdown run.
In reaction to their 60-0 loss to NCT, Central Athletics stated via Twitter: “Tough opening night for our varsity football team. Proud of the never quit attitude. Keep working to get better. We are behind you 100%. Thank you NCT Football for showing class in victory.”

“ Next week our Player of the Week will be selected from this Friday’s home and season opener vs. Crystal River.”

Weeki Wachee High School (WWHS) swim coach Meaghan Jeffers announced via Twitter on Sept. 27, “Last night my Hornets had their first loss to Nature Coast but it was not a loss to us! These athletes swam personal bests, broke school records, and left everything they had in the pool.  I’m immensely proud!”

On Sept. 26 Central High School Athletics reported via Twitter;
“Congratulations to our boys and girls cross country teams for a great showing at our meet today. The Bears were lead by John Carbone who finished first in the boy’s race with a time of 15:07.”

Sept. 24 Coach McHugh comments via Twitter (@thecoachmchugh) on the WWHS team saying; “Volleyball team moves to 4-0 on the season! 3-0 sweep of Crystal River on the road. Back in action Saturday home against @LecantoHigh at 10 am.”

Sept. 27 on twitter, an account named Nature Coast BBall @nctbasketball posted;
“Nature Coast Boys Basketball wins their last game of the evening 51-29 over the View in the FABC Shootout.”

Sept. 22 NCT’s athletic page gave an update that NCT Boys Varsity Golf wins in a tight match with Citrus.
The score was: 218 – 214. Mike Giardino led the Sharks with his score of 48 followed by Connor Charboneau’s score of 49.
On Sept. 25 the Hernando Athletics website posted that Hernando Leopard’s boy’s golf remains undefeated with their wins against Nature Coast and Weeki Wachee.

Sept. 25 on twitter, Weeki Wachee Hornets [email protected]_wwhs posted;
“Meet our first cheerleader of the week… Sarah! Sarah is a junior and a great, new addition to our varsity team. She is an excellent teammate and athlete. Sarah is always ready to put in the work and eager to improve.”