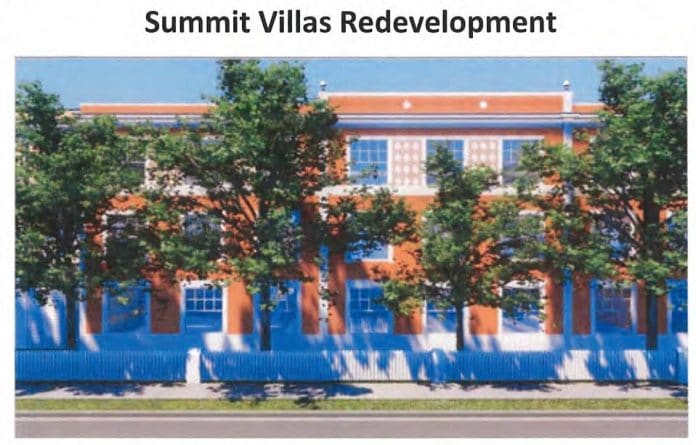 (Sept. 21, 2020 ) Donald Singer, Executive Director of Brooksville Housing Authority (BHA), presented a request to Brooksville’s city council for additional funding from the City for the redevelopment of the Summit Villas public housing project. Located at the corner of Hale Ave and Dr. MLK Jr Blvd, the property has been vacant since 2012 and does not meet current building codes, Singer said.

Combining that property with the adjacent 3.5 acres from the City, Singer proposed demolishing the villas and building 80 affordable apartments for seniors. The co-developer, Fortis, has built similar housing units in Florida.

With an approximate cost of $20 million, BHA and Fortis will need to obtain financing from both public and private sources, including $2.3 million tax credits (incentives). Each funding source has criteria to meet. Some, like Florida Housing Finance Corporation (FHFC), want to see support from local government agencies before approving low-income housing tax credits (LIHTC).

Singer proposed a low-interest loan of $340,000 to the Brooksville Housing Authority. (The fee is set by FHFC and is determined by county size. The larger the county, the higher the local government loan amount.) Though the overall project will cost much more, the “buy-in” from city government increases the chance of approval, Singer said.

The money would not need to be loaned now, but the commitment is required. Once funding (which comes from the federal government) through FHFC is obtained, the City would then loan the money to BHA, which would be repaid over two years.

Joe Chambers of Fortis Development confirmed the need for the City to show a commitment to the project prior to any potential approval of grant funding from FHFC. The City would benefit in other areas, both long- and short-term by way of construction, hotel and restaurant use, property management, etc.

If the FHFC approves the grant and funds the project, the City would then loan the committed $340,000 to the BHA. Singer and Chambers said that could be as early as 12-18 months from now, but possibly as late as 24 months. Repayment of the loan could occur within a few years of project commencement.

BHA will retain ownership of the property, signing a 50-year ground lease agreement with Fortis. After the 15th year, Chambers said BHA will have the right of first refusal to take over the building (“vertical improvement” of the property) rather than transition to a private owner.

The development of the property would meet a need for senior housing. The cost per unit is high, conservatively over $200,000 according to Chambers. The three-story concrete structure would be green certified and include infrastructure improvements. There are currently 30 units on the site. Once completed, there would be 50 additional units, and impact fees and permits would be paid for each one.

Council members requested more information before committing to giving the loan to BHA and Fortis. The deadline to submit the application to FHFC is 11/05/2020. Singer and Chambers agreed to return at the next council meeting on 10/05/2020 with additional information and examples of documents used for other applications.