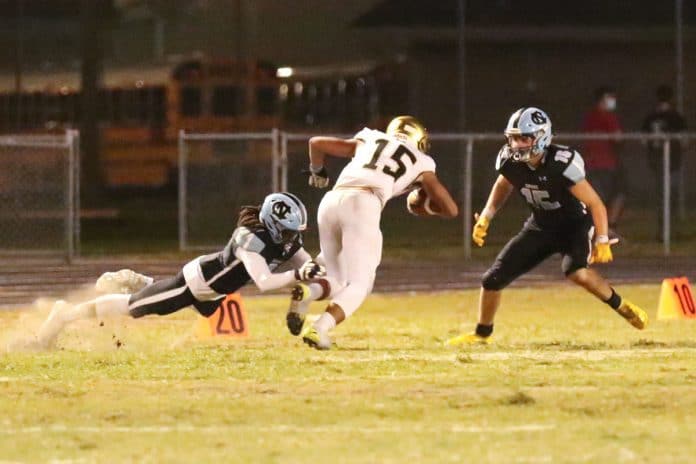 If there’s one high school football game you should really try getting out to this Friday night, it’s the contest over at Nature Coast Technical School. In the third week of high school football taking place, the undefeated Hernando Leopards will travel over to the ‘Shark Tank’ to face off against the also undefeated Nature Coast Sharks. This game has county supremacy written all over it, as both clubs have shown they’re the cream of the crop when it comes to Hernando County prep football. Both clubs figure to make playoff runs once we get to the FHSAA postseason, but for now, just want to run the table. Whoever wins should have a good shot at that, so we take a closer look at the matchup between the Leopards and the Sharks.

Everything on the line

This game will be purely won on the line of scrimmage and all the statistics point to that notion. Nature Coast is currently averaging around 176 yards rushing per game, while Hernando is sitting at an average of 224 a contest. One thing the Sharks have yet to experience is an incomplete pass this season, as starting quarterback Ethan Fahey is 10-for-10 with 192 yards and six touchdown passes. His counterpart, Dominic Bowers, isn’t doing too shabby himself with 245 yards, two scores. But make no mistake, this game will be won upfront.

Many knew the combo meal deal of Ke’Von Williams and Contae Cason was going to be a tough duo to handle, but it’s just getting started over at Hernando. The former Central back has taken over as the ultimate go-to-guy, with Cason currently at 333 yards compared to Williams’ 73. Not to mention that Cason also has seven touchdowns through two games, but the Leopards like their new running back are surely going to use him early and often versus the Sharks.

These two head coaches are well respected throughout the Tampa Bay area, but this game will absolutely come down to the X’s and O’s. And whoever can move the right chess pieces will come out on top. Neither team has really had a test yet but will show what they’re made of on Friday night. Can Johns outsmart Garcia III, who was a defensive guru during his time at Hillsborough High School? Or will Garcia III’s defense stymie Johns’ offense?