Eden Baptist: 175-years and Beyond 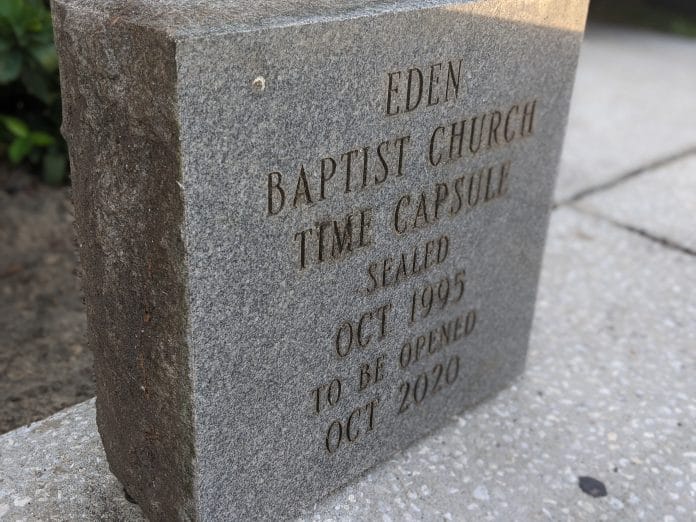 Neighbors, kinsfolk, and congregation members greeted each other with smiles, laughter, and love– as they always have– in front of the church on Lake Lindsey Road.  The church called Eden Baptist has been the bedrock of this small agricultural community for 175 years: as old as the state of Florida and constituted nine years after Colonel William Lindsey, Commander of the Alabama Volunteers, was wounded by an Indian arrow.  He perished by that arrow, but not before making it to a cabin situated near a lake– that lake was named for Colonel Lindsey.  Behind the church is a beautiful view of Lake Lindsey, where countless parishioners have been Baptized.

The first church on the shore of Lake Lindsey served as both a church and a place for the area residents to seek shelter and defend themselves during Seminole raids. This church was burned most likely by the Seminoles.

Mrs. Joyce Honeycutt said, “I was raised in this church and Baptized in the lake back here.”

She mentioned the strong missionary work ethic of Eden Baptist– which began with the church’s first minister John Tucker.  According to the church’s historical documents, Tucker once stated, “I am a missionary and I must travel.”  Tucker was known as the ‘sledgehammer preacher,’ given the name for his short sermons filled with fire and brimstone.

Honeycutt explained, “This past summer we sent a cargo of rice to Nicaragua.” She said that they support a pastor in Nicaragua and a small community.  The church commissioned other members to travel to France and Belgium recently to serve as missionaries.

Eden’s 175th Homecoming Celebration was a day that recalled the challenges and triumphs of the past as well as hope and faith for the Church of the Future.

Twenty-five years ago the Eden Baptist congregation buried a time capsule to be opened in the year 2020 at the church’s 175th Homecoming.  Not many recalled exactly what was in the time capsule, other than photos and newspaper clippings.

A couple of days before the big day, with assistance, Associate/Youth Pastor Zeb Bishop dug up the time capsule buried beneath a granite headstone in front of the church in a few hours– a task he grossly underestimated.

Parishioner Nell Horner moved to the area in November of 1989 after she lost her husband.  She recollected the difficulties the church and community faced a little over 25 years ago.  In March 1993 the no-name storm, with the strength of a hurricane, pummeled Hernando County leaving a loss of life and property.

“We experienced the storm– God just intervened in the whole situation,” Horner said.  And at that time she explained that the church’s finances were in terrible shape.

“We were in debt up to our eyeballs- and with the storm- all the people in the community and the association came together to help restore everything. We were able to pay off our debt and to hold church and then we had the mortgage burning.”

She said that the individuals instrumental in getting the church’s finances back on track are gone to be with the Lord, but she’s thankful to have been a part of that.

“It’s amazing- I was so pleased with the fact that I could be a part of that you know.  Eden has survived so much in 175 years.”

Eden Baptist had a guest speaker to help them celebrate their anniversary, Reverend Jim Henry. Reverend Henry is the Pastor Emeritus of the First Baptist Church in Orlando.

In 1995, the parishioners at Eden Baptist wondered what their church of future would look like in the year 2020 as they wrote letters to the future congregants.  The letters are bittersweet with a mixture of blessings, well-wishes, and expressions of gratitude.  Some hoped that the world would be a better place in 2020 than their world of 1995.  Most of all they hoped the church would still be around to serve the community in order to continue God’s work.

“My prayer for you is that you will have the love of God in your hearts like the ones I worship with this Oct. 1995.  May God continue blessing you as he has us.

It seems strange to be writing something someone will be reading in 2020 when I will be 90 years old if the Lord allows.  I hope be now God has given you cures for cancer and Aids and other diseases and peace is in the world. Our lives in 1995 are very good as God takes care of us!” — Shirley Ann Shiflitt

“We hope when this little note is read, that the world is a little better off than it is today. (1995). The only constant you can depend on is the Lord Jesus Christ. With you all in Christ, Robert, Carol, Tyson, Justin, and Jessica”

“I have been a member of Eden Baptist over 55 years.  I have many sweet memories of this church and its members.  Many of them my relatives- my granddaddy and grandmother- my mother and father, and my husband were members and are buried in the Eden cemetery.  I hope the church prospers for many more years.”