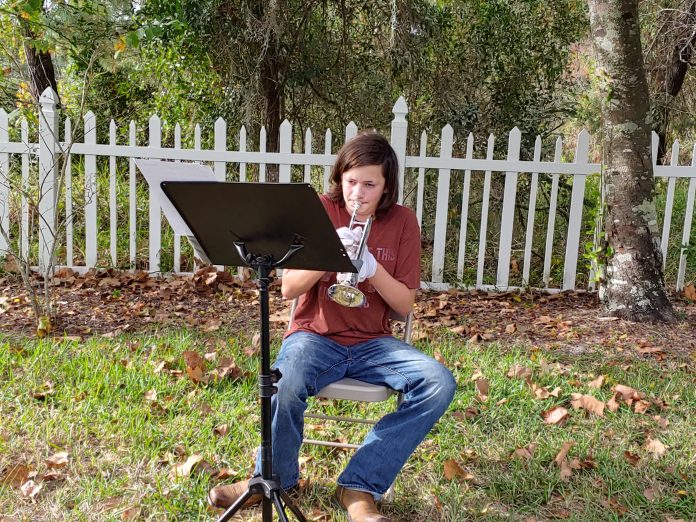 Like most other pursuits during the past eight months, the Covid-19 pandemic has halted the performing arts. But that’s not stopping the Hernando Youth Orchestra from practicing and looking forward to the day when they can again give concerts.

Last Sunday, a group of seven dedicated musicians, ranging in age from ten to seventeen, gathered at the home of Ellen Paul, Executive Director of the Orchestra, to practice outdoors. Despite winds and the threat of rain, these young people rehearsed their repertoire, ranging from the finale to Beethoven’s Fifth Symphony to the Halleluiah chorus from Handel’s Messiah.

Founder of the youth orchestra, John St. John boasts, “We are the only orchestra in the Tampa Bay area that is holding rehearsals right now.”

Several of the young people had only recently joined the group, which consists of approximately twenty-five musicians.

For Ellie Shuff, a fourteen-year-old home-schooled student, this was her first time rehearsing with the orchestra. Ellie has been playing the clarinet for approximately four years.

“When I was in fifth grade in public school I wanted to join band, but I didn’t know what instrument I wanted to play. Once I heard the clarinet, I liked the sound of it.”

Because she started home-schooling this year she didn’t have an opportunity to take band. She knew she wanted to play, so when her mother found out about the youth orchestra, she immediately signed up. Ellie enjoys playing classical music and will have ample opportunity to hone her skills. The Hernando Youth Orchestra often tackles difficult pieces and rehearses them over and over again until the group has perfected them.

Abri Anger is in eighth grade at Fox Chapel Middle School and has been playing the flute for almost three years. She got into the band at her school when she was in sixth grade, but this was only her second time rehearsing with the orchestra.

As for her choice of flute, Abri states matter-of-factly. “When I got into the band, this was the only instrument I could play well. I enjoy playing upbeat tempo songs in all different genres.”

Allan Breithaupt, one of the directors of the orchestra and its conductor, has been volunteering with the group for eight years. Music has been a hobby of his for many years and he used to play with the Hernando Jazz Society. He plays keyboard, trombone and baritone horn.

“I heard about the Hernando Youth Orchestra and decided to check it out. Then John [St. John] recruited me to be a conductor. I had never conducted anything in my life! I would learn things every week as I went along.”

With Breithaupt conducting, St. John is able to play the cello with the orchestra and give the young musicians more guidance.

There is a turnover due to students graduating from high school, so the directors’ goal is to recruit enough musicians to replace those people and build up to a full orchestra.

Deuce Chamberlain plays the cornet, like his father, and they both play in a Salvation Army quartet. Deuce has been studying the cornet six years and has been in the youth orchestra for two weeks. The young man is classically trained and enjoys playing classical as well as religious pieces.

“I got interested in the youth orchestra because my bandmaster at Powell Middle School gave us the papers last year to sign up. This year I was looking for bands to get into.”

Crystal Nilage is ten years old and has been playing the keyboard since she was four. She has been a member of the youth orchestra for several years.

“When I was four I chose to play the keyboard because I really liked it. I practice about thirty minutes a day.”

Charissa Brooks, at fifteen years of age, is the concert master and has been with the Hernando Youth Orchestra since 2015. Along with the violin, which she’s been playing for nine years, she also plays the flute and started out as a flautist with the group. When the woodwind section filled up, Charissa switched to violin.

“I chose to play the violin here because it would be fun and, when they needed a concert master, I was able to fill that position. The part I like best about being the concert master is that I get a good view of the conductor, I get to help the others,  I get to say what we want to play more often and I get introduced at the beginning of every concert,” Charissa remarks.

Charissa also plays piano and aspires to be a concert pianist.  She has come in first place in all-state competitions in all three of her instruments.

Rounding out the septet practicing on Sunday were seventeen-year-old Ashianna Mislay and eleven-year-old Christian Colvin. Both students play the violin.

The only requirements to join the youth orchestra are that prospective members be under the age of twenty-one and have some skill in playing their instrument. If a student cannot afford to purchase an instrument, the orchestra can often lend them one to use while they are a member of the group.

These seven students show their perseverance and dedication by continuing to pursue their passion, rehearse and prepare themselves for their next performance that all of them are looking forward to. Hopefully, it won’t be long.

Go to www.hernandoyouthorchestra.org or call (352) 544-8105 for more information on how to join the Hernando Youth Orchestra, donate an instrument, make a tax-deductible contribution or volunteer.