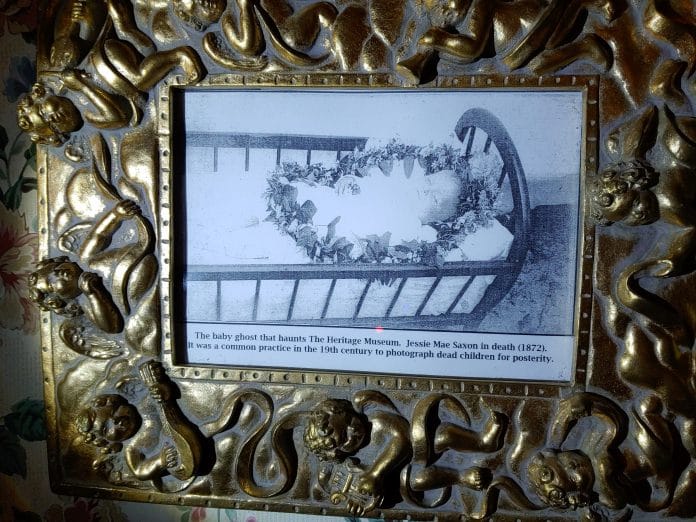 What better combination than a full-moon Halloween and an evening spent at a haunted house? That’s how a team of paranormal investigators and their guests spent this past All Hallows’ Eve.

The May-Stringer House in downtown Brooksville, also known as the Hernando Heritage Museum, is historically haunted and home to artifacts dating back to Antebellum Days.

It was built in 1856 by John May who died of tuberculosis here. Marena, his widow, married Frank Saxon and they lived together in the house until she died giving birth to their daughter, Jessie May. Tragically, Jessie May died in 1872 at age three. Jessie May is the predominant spirit that haunts the house, but other ghosts reside here, as well.

For example, the attic is haunted by Gary, who, unlike Casper, isn’t very friendly. He’s “attached” to a trunk that someone donated to the museum and doesn’t like people bothering him or touching his things. How do they know his name is Gary? On several occasions, they’ve gotten a voice that came through on their equipment that said his name is Gary.

He must have a sense of humor because he likes to tease the ghost hunters by turning a flashlight on and off. I witnessed this myself. The flashlight would go on and then after a few seconds, after the visitors asked him to turn it off, it would go off. Then it abruptly would go back on. There was no one manipulating the device and the bulb or batteries weren’t loose.

Ghosts usually are found in places associated with tragedy or death. Dr. Stringer lived here and had his office located in the house and who knows how many or what kinds of deaths occurred here.

One of the investigators was Tony Ferraro who lives in Pensacola. He comes to the May-Stringer house three or four times a year. Like most of the people that evening Ferraro was in costume – dressed as a Civil War Union soldier. I hope he didn’t upset any of the ghosts because Hernando County was solidly on the side of the Confederacy during the Civil War.

Earlier that evening Ferraro had a couple of eerie experiences.

“I was up in the attic and all of a sudden I felt the floorboard next to me move. It felt like someone was standing next to me and had jumped. It really startled me because no one else was up there. I also caught a woman’s voice in the hallway upstairs.”

Jesse Lisk, co-founder of the Brooksville PIT (Paranormal Investigation Team), has been ghost hunting for seven years. He comes to the museum almost every week, sets up a camera, and live streams on Facebook.  Lisk has experienced some unexplained phenomena here as well.

“One time I was here opening up by myself and I was coming downstairs to turn the lights on. I got to the last step and heard a woman’s voice to my left say, ‘Hello.’ I turned toward the voice and said, ‘Hello’. The voice was so loud. We had a ghost tour where we were on the second floor and we heard two women talking on the first floor. Everyone was upstairs, all the doors were locked and there was nobody outside.”

At the Oct. 31 ghost hunt, Lisk and his team had a plethora of gadgets and equipment. These can be ordered online; however, he and some of the others also make equipment using a 3D Printer.

One particularly creepy item was a teddy bear that reminded me of the Teddy Ruxpin toy that was popular years ago. It has a mechanism inside so that when you turn it on, it lights up. It asks questions and tries to get responses from any spirits that might be present. It also detects touch and changes in temperature. If the spirit holds the teddy bear’s hand it will say, “Thanks for holding hands with me.” It’s used as a “trigger object” – an item that the investigators put out to try and get spirits to appear.

Some ghost hunters will try to bond with a particular spirit. Brooke Bachtel has been with the Brooksville PIT for only a few months, but she’s been a docent at the museum for almost two years.

Ms. Bachtel got interested in the paranormal when, as a child, she would see strange apparitions in her home and had vivid dreams. An especially disturbing recurring dream was one of her father dying in a car accident.

“It kind of freaked me out,” she states. “Then, when I was nine my dad did pass away – in a car accident. After he died I still dreamt of him and wanted desperately to communicate with him.”

Ms. Bachtel frequently spends time in Jessie May’s bedroom and reads to the child. She also plays hide and seek with the children whose spirits might still be there or brings out toys for them to play with.

“I get a lot of activity that way. The children intrigue me maybe because of what I went through with my father.”

The attic is the most haunted place in the house. Besides the trunk, there’s a picture of a woman displayed here. The man who donated it said it was a picture of his mother and he didn’t want to keep it around anymore because it was haunted.

There’s even a ghost cat that haunts the attic. People have felt as if something was walking between their legs. They use a special camera called an SLS camera that captures a skeleton-like image of an unearthly person or animal. It maps out the shape and makes it appear as a stick figure. The camera has caught an image of this cat crawling across the floor.

Whether or not you believe in ghosts as these paranormal investigators do or whether you’re a skeptic, like me, the May-Stringer house is worth a visit just for its historical significance. You will learn a lot about the people who lived here – and died here – and the events that took place during the time this house was an important part of Brooksville. And – if you happen to sense a spirit or experience things that can’t be explained, that’s a bonus – at no extra charge.

For more information on the May-Stringer House and other museums operated by the Hernando Historical Museum Association call 352-799-0129 or go to www.hernandohistoricalmuseumassoc.com.