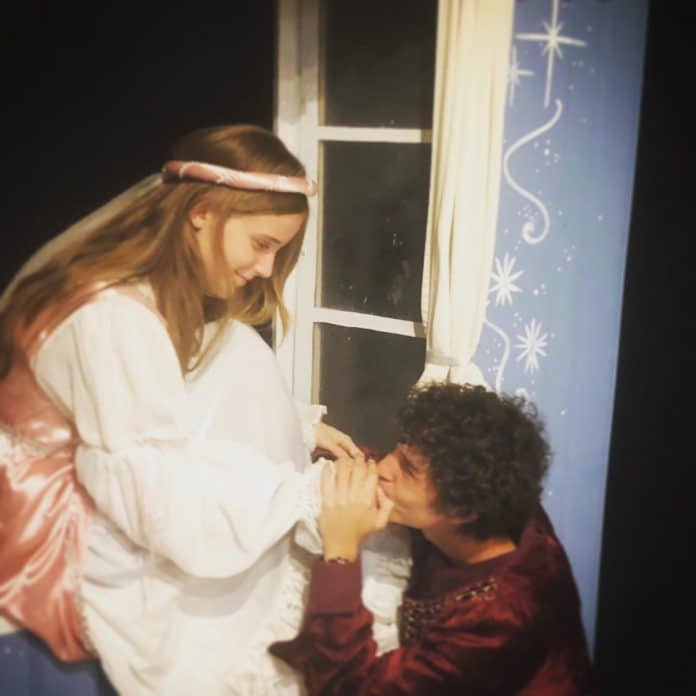 Whether or not you’re a Shakespeare aficionado or barely remember the 16th century playwright from high school English class, you can’t help but be impressed by Live Oak Theatre’s presentation of The Bard Unleashed. The cast comprised mainly of actors ages fifteen to twenty-three captivated the audience with its stellar vignettes of eight of William Shakespeare’s works.

They included comedies, tragedies, and one historical play. The writers even threw in a tribute to a popular quiz show. The small cast often had multiple parts and performed them flawlessly.

Without spoiling the show for future audiences, let me just say that it was akin to The Twilight Zone meets Jeopardy, The Marx Brothers and I Love Lucy along with enough authentic Shakespeare to satisfy even the pickiest purists. In other words, there was something for everyone. The physical comedy along with the expertly choreographed swordplay was enough to keep the audience awake and laughing throughout the hour-long performance.

The outdoor venue, with a newly-constructed stage, led to the authenticity of the performance since Shakespeare’s plays were originally performed in an open-air theatre. Even today, many theatre companies perform his plays outside and the balmy weather last Saturday evening was ideal for viewing the show.

The cast consisted of Makayah Rees, Cherilyn Staley, Lenia Richards, Ben Staley, Stephania Torres, Elijah Torres, Eje Walters, Lindsay McTague – all under the age of twenty-four. Christopher Rees, who co-directed the show, rounded out the cast. All of the actors are seasoned performers and it showed. They also rehearsed for several months, something essential in order to memorize all the parts and learn the staging of each act.

Christopher Rees, co-director, remarked, “We wanted to do Shakespeare, but we didn’t want to do just regular Shakespeare.”

And this was by no means, “regular Shakespeare.” It was the Bard’s works like you’ve never seen them before. The snippets that the writers chose to do were from Romeo and Juliet, A Midsummer Night’s Dream, Macbeth, Hamlet, The Taming of the Shrew, Othello, Much Ado About Nothing, and Henry IV (Part One). Several of the actors also performed famous monologues AND there were a couple of surprises thrown in. It took Ron Dykes and Kyle Marra approximately three months to write the script.

Seventeen-year-old Elyck Walters who played four very different characters commented, “It was a challenge at the start getting into Shakespeare – kind of intimidating. After practicing and going over the lines again and again, it worked.”

Lindsay McTague, at twenty-three, is the eldest of the cast except for Christopher Rees. Her characters probably had the most diversity of any, from the tragic Desdemona in Othello to the over-the-top comedy of Hermia in A Midsummer Night’s Dream to the very patient Poins in Henry IV Part One, trying to keep track of all of Falstaff’s tall stories.

“Switching between the roles was an interesting challenge,” she stated.

Fifteen-year-old Eje Walters took on five roles, from the major roles of Macbeth and Othello to several supporting roles. Eje has been acting since he was thirteen.

Elijah Torres has been acting for eight of his fifteen years and performed Hamlet’s famous monologue, but with a twist. He also had several supporting roles and played the lead in Henry IV Part One.

Seventeen-year-old Stephania Torres has been acting since she was five. In a role-reversal, Stephania portrayed the much-maligned Shylock performing his monologue in the first scene. She also played the shrewish Katharina who is finally tamed by the persistent Petruchio.

Ben Staley, twenty years old, played Romeo in the titular character in the famously tragic love story and the comic Falstaff in Henry IV Part One. He has been acting for five years.

“The language was slightly more difficult [than other plays], but it was a fun challenge. Also, I played comedic parts and I don’t usually play comedic parts, so that was also difficult,” Staley said.

Eighteen-year-old Lenia Richards has been acting “basically my whole life” and comes from a theatrical background, her father being a method actor and drama teacher. Lenia has performed all over the world with a church theatrical group. Her characters in the show ranged from sweet and innocent Juliet to one of the witches in Macbeth.

Among the roles Cherilyn Staley played was Helena in A Midsummer Night’s Dream and a witch in Macbeth. At twenty-one, she has been acting for six years, mostly with Live Oak Theatre.

Sixteen-year-old Makayah Rees portrayed two tragic figures – Cordelia in Hamlet and Lady Macbeth, along with smaller roles. She has nine years of acting experience under her belt.

Vince Vanni, co-founder, vice president and Marketing Director of Live Oak has been involved with theatre for countless years in many capacities – acting, directing, producing, etc.

Vanni stated, “When I was asked to view the final run-throughs, I was completely blown away by the way the cast was able to portray what was happening in a manner that was easily understood and enjoyed.”

Elizabeth Richards who was in the audience commented, “I loved the physicalization, the mastery of the meaning beneath the words. You could tell they [the actors] were having a lot of fun with every scene.”

Her fifteen-year-old son Ezekiel agreed, “I really enjoyed the comedy, even though they put in much serious scenes, too.”

Myra Stack, who has attended numerous Shakespearean performances, stated, “The play was different and exciting and definitely kept you captivated. It was a great adaptation of Shakespeare, showing off the talent of the young performers.”

Anyone who thinks that Shakespeare is just for “eggheads” will come away with a completely different perspective after they’ve seen The Bard Unleashed.

There will be three more performances of The Bard Unleashed – November 20-22. Showtimes are 7:30 on Friday, 2:30 and 7:30 on Saturday, and 2:30 on Sunday. This is an outdoor performance so be sure and dress for the weather. Some chairs are available, but you may bring your own. Social distancing will be practiced. For ticket prices and to purchase tickets call 352-593-0027 or go online to www.liveoaktheatre.org.