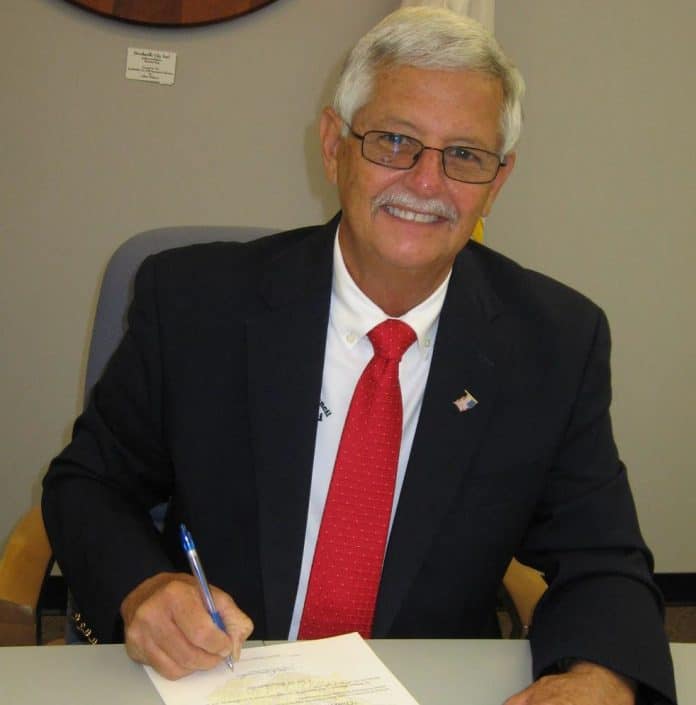 Outgoing council member William Kemerer was honored on November 16, 2020, as he has given over five years of service to the city of Brooksville– serving on city council from Aug. 3, 2015 to Dec. 7, 2020.

Kemerer, a Florida resident since 1977, had a long career as a Certified Public Accountant for regional and national Public Accounting Firms and then served as a Vice President of Finance for a hotel management and development company.  He was chosen by Council in August of 2015 to fill Seat 3 on the Brooksville City Council.  Seat 3 was formerly occupied by Joe Johnston III, who passed away in July of that year. Kemerer was chosen from a group of six candidates who had submitted letters of interest and a resume for consideration.

Kemerer chose not to run for re-election as he believes in the benefits of term limits.

‘Term limits are a great idea and I feel fresh blood offers fresh perspectives in leadership and that is always a positive,” he stated. The Resolution in his honor best summarizes his contributions, “… he cares about the City and is devoted to making policies and decisions for a better community, deeming no matter too great or too small for his attention.”

In addition to his service to the citizens of Brooksville, Kemerer served on the board of directors of the Westchase Community Homeowner’s Association in Tampa and was District Supervisor for the Westchase Community Development District. He also served on the board of directors at Southern Hills Homeowner’s Association from 2012 until 2015.

On Dec. 7, 2020, the city honored outgoing council member Joe Bernardini who has served as Mayor of Brooksville this year, having been appointed mayor in January. Bernardini has had a 25-year city council career and was recently honored by the Florida League of Cities for this achievement- receiving the Mayor John  Land Years of Service award.

The city council presented a plaque to Bernardini in absentia during the regular City Council Meeting at the Jerome Brown Community Center located in Tom Von Park.

Bernardini retired after 44 years with AT&T, previously known as Southern Bell and Bell South, he also worked three years as a  Brooksville Police Officer. In addition to Council, Bernardini has been involved in many civic organizations serving as a member and officer to include the Brooksville Jaycees, the Noon  Lions Club, the Hernando County Fair Association, and the Hernando County United Way.  Bernardini also served more than 25 years as an auxiliary deputy and reserve deputy for the  Hernando County Sheriff’s Department. Currently, Bernardini volunteers his time to Operation  HeartF.E.L.T. – a non-profit organization whose mission is to provide nutritious meals to students and their siblings on weekends, holidays, and extended school break periods in  Hernando County.

Bernardini a lifelong resident of Brooksville, graduated from Hernando High School,  attended St Petersburg Jr. College, Pasco Hernando State College, and graduated from St Leo’s  Police Academy. Bernardini’s commitment to the  community speaks for itself and serving on the Council provided an avenue to make a positive  impact; as confirmation of his dedication, Bernardini has been known to quote the last line of the  Jaycee Creed, “And that Service to Humanity is the best work of life.”

During the Dec. 7, 2020 council meeting, newly elected council members David Bailey and Blake Bell were given a hardy welcome to the city council which included an appearance by State Senator Wilton Simpson.

Bailey is a Hernando County resident of more than 33 years, who won Seat 2 against incumbent Joe Bernardini in a very tight race. Bailey, a business owner, has served the community as a board member and volunteer for Operation HeartF.E.L.T. He also volunteers for the Hernando High School  Girls’ Golf Team and Girls’ Volleyball Team. Bailey is happily married to his wife Robin and together they have three children who also live and work locally.

Blake Bell, born and raised in Brooksville, was sworn in for Seat 3, which was left vacant by retiring council member, William Kemerer. Bell ran against Tom Dye, winning a substantial portion of the votes. Bell is a graduate of the University of South Florida and received his law degree from the Mississippi College School of Law. Bell works as an attorney in his Brooksville office—specializing in healthcare law and liability reform. Bell received the  Hernando County American Legion Citizenship Award and was selected as one of the Business Journal’s Top 40 under 40.

Senator Wilton Simpson who serves as the representative for District 10, performed and witnessed the Oath of Office. Both Council Members will serve four-year terms and are eligible to run for re-election in 2024. Consecutive terms are limited to two, full, four-year terms with a  minimum of a one-year period of time out of office before being allowed to run for council subsequently.

Information in this article provided by the City of Brooksville.