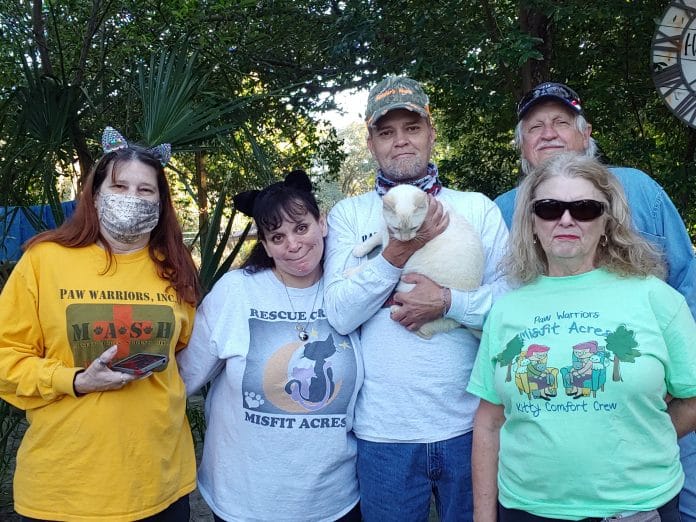 The PAW Warriors organization has been in existence for almost ten years. Its purpose is to care for stray or unwanted cats, especially those that are sick or injured. They advocate responsible pet ownership and practice what they preach. Since 2011 they have had more than 5,000 cats spayed or neutered and also make sure all have their rabies shots and other inoculations. Currently, 116 cats and four watchdogs reside on the five acres, just north of the Pasco-Hernando county line. Approximately fifty cats are in foster care.

Ms. Steger, who did vet tech training at St. Petersburg College, also lives on the property. She describes the conditions of some of the cats that come to the shelter. The stories are heartbreaking.

“We’ve had a lot of medical cases come in. Sometimes we go out in the middle of the night to pick up sick or injured cats. They’re mostly street cats. Sometimes they’re dehydrated, riddled with scabies, ear mites, and mange. Some have broken legs, open wounds; some are blind and some have to have legs amputated. We’ve had a lot of cats with bullets or pellets found in them.”

Taking care of all those cats, many of whom never get adopted, is an expensive proposition. PAW Warriors relies on volunteers to take care of the cats, along with donations of food and supplies, as well as cash, to keep the doors open. Students from Hudson High School and Springstead High School have volunteered at the shelter and they recently received a Doris Day grant of $5,000 to get care for the senior cats. Through a fundraiser last year they were able to enclose their cabana, which used to be open-air. Now, the cats have a temperature-controlled environment that is cool in the summer and warm in the winter.

Ms. Steger encourages people to come to visit and play with the cats, even if they’re not able to adopt or foster them. Every afternoon when the cats wake up they have “Happy Hour.” Children and adults come and spend some time loving on the animals and giving them attention. Some couples have even made it part of their date night!

According to Ms. Steger, one of their greatest needs concerns the senior cats and the hospice cats. The organization needs an area just for them.

“They need to be spoiled with food, love, and temperature control. The others need socialization and play,” Tracie remarked.

Silvia Dukes, president of the Rotary Club of Spring Hill, stated, “This is our second year supporting Paw Warriors. We have a lot of animal lovers in our group and we enjoy helping this organization.”

The staff and volunteers at PAW Warriors know every cat by name and the story behind each one. For example, Sport had one leg broken in three places and another broken in two places, and a broken jaw when he came to the shelter. Those had healed on their own, but he also had a huge gash on his neck. “Do these guys matter? To us, they do,” concluded Ms. Steger.

The shelter is located at 355 Spring Time Street, Spring Hill. If you are interested in helping PAW Warriors, in any way, contact Tracie at 352-403-9633 or by email: [email protected]