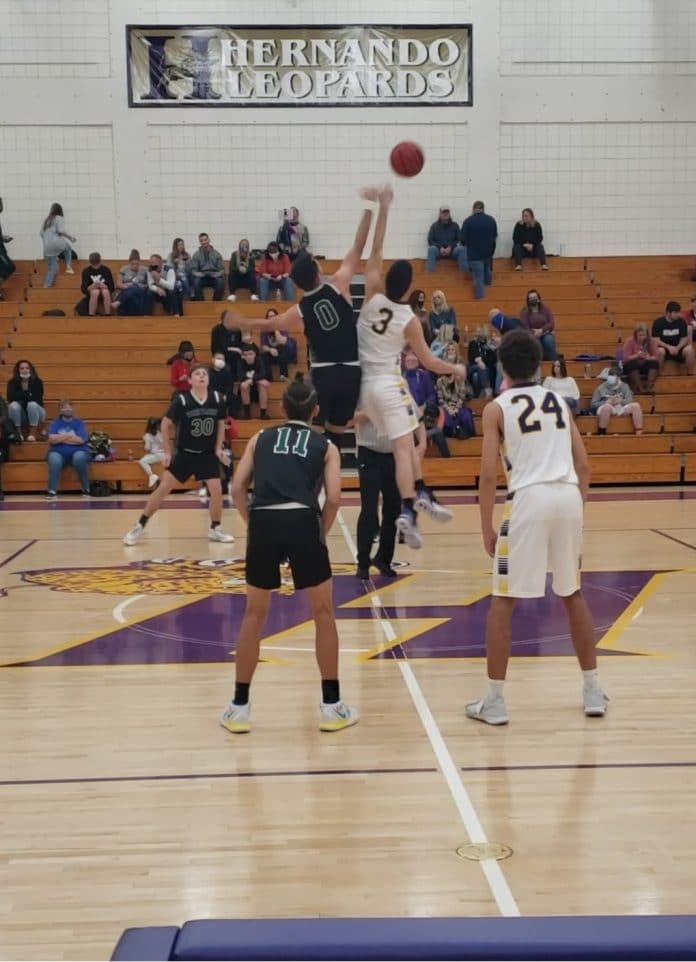 On a night when it seemed that everyone else in the country was watching the results from yet another election that has captivated the nation, it was actually very nice to be watching basketball. A vote for basketball is always a winning proposition and, on this night, there were storylines galore.

On the occasion of the Hernando High School Leopards’ Senior Night, the Weeki Wachee Hornets came with hostile intent. They wanted to put a damper on Hernando High’s special night. But the Leopards would not be denied. They pulled out a 49-33 victory in what was a slightly-sloppy-but-very-entertaining affair.

These teams have met once before in the 2020-21 season. Hernando came out on top then too. In that first meeting, the Hornets held a nine-point lead at the conclusion of the third quarter only to be outscored 23-4 in the fourth—suffering a heartbreaking defeat.

With that in mind, when asked prior to the start of tonight’s game what they needed to do to have a better outcome tonight, the Hornet’s head coach, Steve Boyett, replied simply, “We have to play four quarters.” He then added, “We have a young squad and at that point, I think that was our fourth game and [we had only had] 2 practices. I think probably both teams will be better tonight.” Could Coach Boyett could have known what a prophet he would turn out to be? His team seemed to take two quarters off—only scoring five points in the first and fourth quarters combined.

Both teams were, indeed, better tonight than they had been in that first encounter. The teams were intense. Both squads wanted this win.

Nowhere was this more apparent than in the players wearing the number 1 on each team—Hernando’s Landon Carter and Weeki Wachee’s Charles Marsh. These young men each seemed intent on carrying their respective teams to victory.

Hornets guard, Charles Marsh, was flying around the court all night. He was always around the ball. He led his team on offense and defense—contributing big plays at crucial times to keep his squad in the hunt. Marsh, along with Senior guard, Isaiah Daniels, led the Hornets with nine points apiece.

The night, however, belonged to Landon Carter. Leading all scorers with twenty-four points, this was his night—Senior Night. He started putting on a show early when, about halfway through the first quarter, he broke away on a fast break and slammed the ball home with authority. Carter continued making play after play in the first half. He drove to the hoop. He made three-pointers. He made shots that were so tenaciously defended that mere mortals could only dream of such excellence.

Weeki Wachee did manage to slow Carter down some in the second half, but without his scoring and leadership, Hernando would not have stood a chance.

Following the game, the Leopards’ Head Coach, Travis Bruns, said of Carter’s phenomenal performance, “Yeah, I think all his big games have come against Weeki. He’s done pretty well against them in his career.” Then Bruns added, “[Carter] struggled this year because everybody keys on him. He gets everybody’s best player. I mean, he’s the best shooter in the area, in my opinion.” Coach Bruns also praised his teams unselfish offensive play and the way they helped each other on defense.

One sentiment that both coaches shared was the havoc that Covid-19 has played with this basketball season. Games are able to be played—for which we are all thankful—but some of these games are played with little or no practice time in the days prior. There are protocols to follow, complex issues with which to deal all while trying to create some kind of chemistry between players.

This season has not been anything close to normal, but the bottom line is that we still have basketball! That is something celebrate. So instead of focusing on national news, Senate elections, or politics, I vote for basketball!