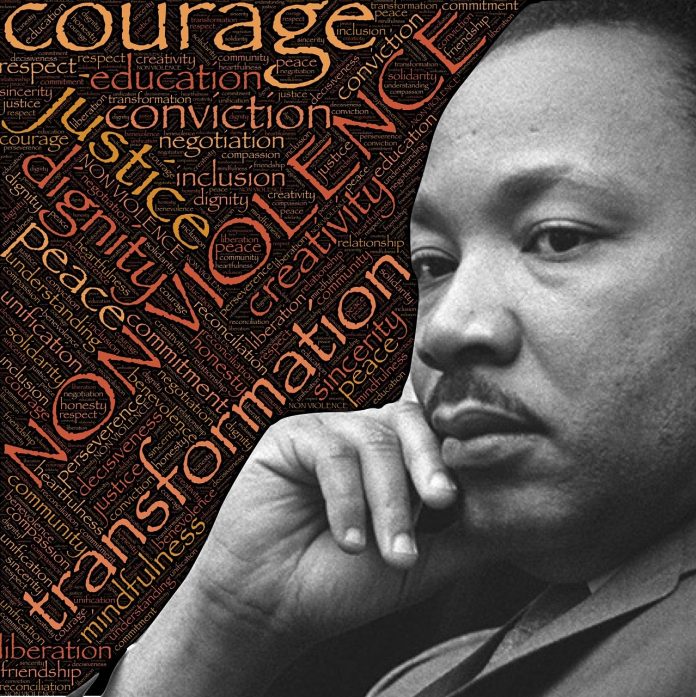 On January 15, Martin Luther King would have been ninety-two years old – if he were alive. Sadly, he was assassinated before his 40th birthday on April 4, 1968.  He spearheaded the Civil Rights movement with his tactics of non-violence and has inspired three generations.

A number of local African-Americans were involved in the Civil Rights movement.

Paul Douglas has been active for more than sixty years in the struggle for equality. He grew up among well-known African-American heroes like Jesse Owens and Jackie Robinson. His father was an athlete in the 1948 Olympics and Owens was his mentor.

While a student at Tuskegee University, Douglas worked on voter registration in nearby Selma, Alabama, and participated in the march from Selma to Montgomery with Martin Luther King, Jr. and other leaders. In fact, he worked with Viola Liuzzo and saw her moments before she took off in a car with a young black activist. A little while later, she was shot and killed by a group of Ku Klux Klan members.

Douglas recounted another terrifying incident that took place at Tuskegee University during this time. Douglas’ fiancé, Susan, worked in the admissions center. While he was in Selma one day, he got word that a bomb had gone off on campus.

“I hauled back to Tuskegee real fast and when I got there the admission center was missing. It was blown to pieces. I went crazy and I ran to the administration building across the street. They told me that she made it out of the building just prior to it blowing up and the blast blew her through the door of the administration building. It was almost closing time, so fortunately nobody was killed.”

In an understatement, Douglas comments, “It was a very interesting time.”

Despite the tragedies and violence, there were some good things that happened and some success stories. Paul tells about an old Black farmer who pulled up at Tuskegee University in 1965 in a wagon pulled by two mules. He registered himself and the members of his family to vote. He had never voted before. Douglas has a picture that he has kept all these years of the farmer in front of the mule-driven wagon.

Douglas moved to Hernando County in 2003 and became active in the local NAACP. He has been president of that organization for the past eight years and ran for County Commission but lost that race.

Despite the fact that Hernando County and the country have made tremendous strides in the past fifty-five years, Douglas believes that there are still challenges to be overcome.

Douglas praises most of the political leadership in the area, including school board and City Council members and some County Commissioners for what they have done and are doing. He also has the utmost respect for Sheriff Al Nienhuis and his officers for maintaining the peace during the upheavals this past summer and for their fair treatment of all the citizens of Hernando County.

“Al is a friend of mine. He is the stalwart individual in this county.”

Although local minister Reverend Emery Ailes was too young to take part in the Civil Rights movement in the 1960s, it shaped his outlook. He became a minister at a church in Harlem working on human and civil rights issues as well as restoration of voting rights. In 2013 Reverend Ailes moved to Hernando County.

The Pasco Hernando State College (PHSC) professor is actively involved in social justice and equity for people of color and teaches Religion and Humanities at the college. He is also director of Success Academy and coordinator of the LIFE program (Linking In Faith and Education) at PHSC.

Ailes helped form the Black Coalition of Hernando County and is a member of Bridge Builders, a local faith-based group, as well as the Hernando County Minister’s Alliance. Although Ailes has been involved in civil rights for many years, one event last year brought the injustice into focus.

“What was the tipping point for me was the George Floyd incident where the world saw a human being with a knee on his neck, bleeding and crying out for his mother.”

After that, Ailes participated in the Black Lives Matter rally last July and the prayer rally on the courthouse steps in September.

The minister also heads a LIFE Line teleconference that meets virtually every Thursday at 9 am. On Feb 1, 10 am – 1 pm he is holding a virtual summit focusing on equity for black males to ensure that they have everything they need to be successful.

When it comes to these two individuals and many other people in the community, of all races and ethnicities, the progress of the last sixty years is just a stepping stone to further strides in the area of economic, social, and educational rights for everyone, regardless of race.

Two statements by Martin Luther King seem to sum up where we are today:

“We may have all come on different ships, but we’re in the same boat now.”

“Injustice anywhere is a threat to justice everywhere.”