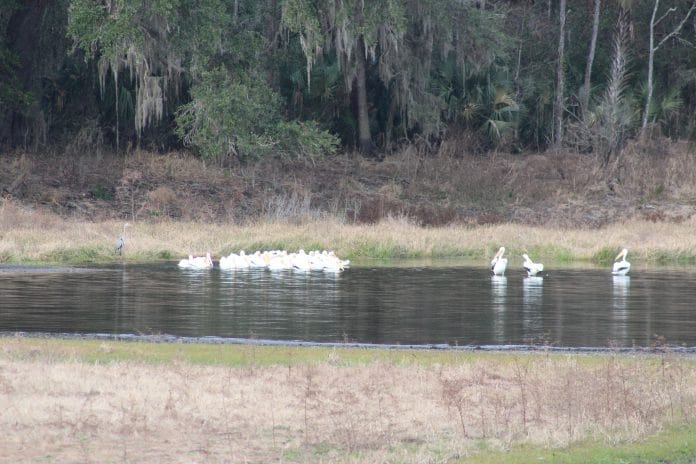 For over a week, Johnson Pond in Brooksville has been home to a flock of American White Pelicans. Johnson Pond is located north of Lake Lindsey Road near where it crosses US Highway 98.

The American White Pelicans generally winter on the Pacific and Gulf of Mexico coasts. Florida’s Gulf Coast is a popular destination for their winter home. They are rarely found on the beach instead they are often found in estuaries and lakes.  The American White Pelicans are one of the largest flying birds in the area: about the size of a goose. They can grow to have a 9-foot wingspan.

They feed in shallow lakes and unlike the better known brown pelicans, they usually do not dive from the air to catch fish. They swim and scoop fish with their beaks. They often fish together cooperatively chasing the fish before them.

American White Pelicans are excellent flyers and often travel in large flocks maintaining a V formation. They can travel long distances which is necessary since they summer in northern America and Canada. They are found as far south as Panama.

Due to the American White Pelicans summering in Canada, they are one of nearly 1,100 species of birds listed in the Migratory Bird Treaty Act of 1918. This agreement between the US and Canada (Great Britain controlled at the time and signed the act) bans the pursuit, hunting, taking, capturing, and killing of these birds without a waiver.

The American White Pelican population has recovered from a decline in the middle part of the 20 century to have a population of more than 120,000. They are currently considered ‘a least threatened’ population.

These majestic birds draw quite a bit of attention. Their size and color cause them to stand out and many drivers have been stopping along the highway to take pictures.