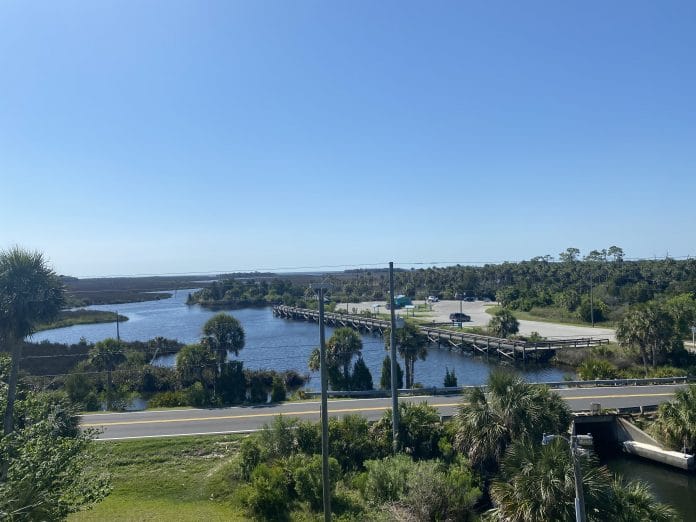 The Board of County Commissioners voted unanimously to approve funding for a feasibility study for the future of an Aquatic Preserve Eco Tour Boardwalk on Hernando Beach. Funding of $65,000 will be made available through park impact fees. County Attorney Garth Coller reported that this is an appropriate use of the park impact fees since it contributes to the area’s growth. Commissioner Beth Narverud was absent from the meeting.

County Administrator Jeff Rogers presented the rationale and highlights of the proposed boardwalk, which will begin at Linda Pedersen park and terminate at the Weeki Wachee Preserve, winding through green spaces and natural features with the intention of providing education and entertainment for visitors. Kayaks and other paddle craft will also be permitted.

According to items in the agenda paperwork, “The study will include evaluation of existing structures and uses, wetlands, soils, topography, floodplain, lakes (former limerock mining pits), wildlife, access, drainage, utilities, primary and secondary impact analyses of the proposed improvements.”

The demand for outdoor recreation, particularly along waterways has increased in recent years.

“Six years ago, you couldn’t buy a kayak anywhere in the county,” Rogers began, telling the story of how the demand for outdoor recreation has increased over the years, especially with the county’s growing population. The project is also expected to ease traffic to existing natural areas that are being overused and degraded.

In order to be certain that natural resources are being protected, the county has been in communication with the Southwest Florida Water Management District (SWFWMD), which has given written permission by answering specific questions in a letter dated March 21, 2021. In the letter, the boardwalk and parking would not be prohibited provided certain rules are followed such as for the parking areas and the paddle craft launching areas.

Not exactly a new proposal, the idea for additions to the recreational areas within the Weeki Wachee Preserve was first explored in 2009 and has undergone several revisions since.

Commissioner Steve Champion was not opposed to the feasibility study, however, he believes the process could be simplified. Champion said, “In general, when you’re dealing with the government, we tend to overcomplicate things. I don’t think anyone here needs a feasibility study to know that we need to open this for recreation.” He went on to say that many of the features were not natural features, but man-made rock mines, and therefore not in need of governmental protection.

In 2009, additions were made to the existing boardwalk at the Weeki Wachee Preserve, but after the restrooms, fire hydrants, and lighting were installed, the expansion stalled. In 2014, local residents and business leaders began proposing new ideas to the county.

This project has the support of the Coastal Hernando Business Group, mostly comprised of business owners on Hernando Beach. Yann Milcendeau, owner of the Hernando Beach Motel, Silver Dolphin restaurant and Captain’s House commented how his visiting family was unable to visit some local parks at 10:00 in the morning because they had reached capacity. “This is a balanced approach to improve an existing recreational area.”

Diane Moore Greenwell, the current president of the Hernando Beach Property Owners Association (HBPOA) asked to be on the record as a resident representing the HBPOA.
Greenwell also champions the effect the boardwalk would have on the local aesthetic, as well as local business, adding that during her research, she was surprised to learn that SWFWMD has had plans to add recreational features to the Weeki Wachee Preserve since 1997.

“The ‘97 plan called for further studies for development… conservation protection and limiting recreational use to the ‘disturbed mining pit area,’” used now for swimming. Greenwell and others stated that the purpose of the feasibility study is to provide a report of features and additions that will protect the characteristics of the preserve.

Some residents are passionately opposed to the project. Thirty-year resident Lisa Savarese is unhappy with the number of visitors to the area. “There are already hundreds of people in [the preserve] every day … it’s a monumental change of living here,” she said of the increased population and traffic she has seen over the years.

Others are concerned that bears, boar, and big cats still live in the preserve, and adding more people to the area could disrupt wildlife habitats, as well as endanger humans. They also urged the commission to curb the flow of visitors to protect the existing natural features.

The attending commissioners emphasized that they were voting on the topic of the Weeki Wachee Preserve and Linda Pedersen Park, and not the inclusion of any residential areas within Hernando Beach. Commissioner Jeff Holcomb stated that if residential areas would be impacted, he would have voted against the study. Commissioner Wayne Dukes, also a Hernando Beach resident expressed his impatience with those who consistently speak out against changes to properties not belonging to them. “I don’t get it,” Dukes said. “If you hate it, and don’t want anything around you, why don’t you just move?