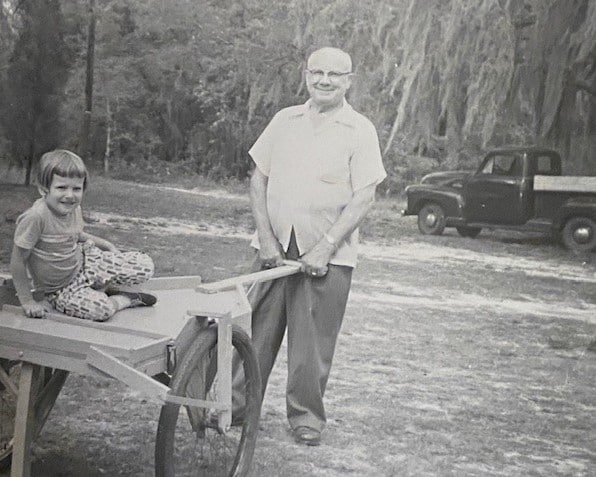 I was asked a question recently about my favorite ice cream as a kid.  And there it was—another summer memory.  One thing led to another (and to this story) and prompted even more thoughts that hadn’t come to mind in a long time.

These are younger memories for me.  Late 1950’s, early 1960’s.  Where would I get an ice cream treat?  We had at two grocery stores of the Mom and Pop variety but I don’t remember going to them for that.  We also had an occasional ice cream truck in the neighborhood.  But no, not from him either.  One of my earliest memories of ice cream involves Dad driving the old farm truck and taking us to the Masaryktown Hotel.  My cousins, brother, and I would pile in the back of his 1949 Chevrolet pickup.  We hung on the side railings.  It was a short ride and we enjoyed the warm breeze. No thought of safety as we moved about in the truck bed from one end to the other. The hotel at that time had a tavern downstairs and a restaurant, and then some hotel rooms upstairs. We got our ice cream from a freezer by the bar.  There were only three flavors—vanilla, chocolate, or strawberry.  Nothing fancier that I recall.  The ice cream came in individual cups that you ate with a small wooden spoon.  I also liked going to the hotel because of the gum ball machine there.  It stood near the doorway between the bar and restaurant.   One cent to spin the lever.  Inside the jar were tiny prizes mixed in with the gum balls.  That’s what I really wanted for my penny!  Cheap plastic charms of all kinds.  Today those little charms hold nostalgic value and command a good price on EBay.

We might get a soda to take home, too.  They came in thick glass bottles back then.  No twist off caps.  Bottle openers were needed.  Afterward you would return the bottle to the store and get back a small deposit, usually 2 to 5 cents.   We kept assorted sodas and their empties in a wooden crate that held about two dozen bottles.  It was under the workbench in our egg room.  Some of the brands you might see in it were Royal Crown Cola, 7-Up, Pepsi Cola, Dr. Pepper, Hires Root Beer, or Nehi. My Uncle Ed in Tampa was the king of cola with a full case of those little 8 oz Coca-Cola glass bottles.  We knew we could find one to drink in his extra refrigerator.  He kept them there along with the case of eggs we brought him.   I can also remember the red Coca-Cola drink machines that dispensed those 8 oz. bottles.  I put my money in one many times at the old Publix store on Brooksville Ave., located where Easy Street Home Decor is today.  Western Auto had the front corner of the block and then Publix was alongside it.  I remember going shopping there.  The grocery store stayed in that location until October 1965.  That’s when two new shopping centers were built south of town.  The new Publix was much larger, expanding from 5,000 square feet to 21,000 square feet.  Hard to believe we needed so much room to shop for our groceries!   Now we think nothing of shopping in stores two and three times larger!

One of my cousins reminded me that cookies were served along with our drink.  We would have Oreo cookies and a small glass of cold soda, no ice. We were limited to one soda per day.  And yes, we opened the cookies and ate the filling first.  I also remember eating lots of vanilla wafers.

Summer would not be complete without watermelon.  We kids might be sent outside to eat large messy slices and spit out the seeds.  Mom and Dad would eat their slice in a bowl using a spoon and adding a little bit of salt.  We bought melons from roadside vendors not a store.  I vividly remember some of the men of my Dad’s age group (other farmers) arguing over whose watermelon was best and busting a few of them on the ground to prove a point! I was told later not to get upset over a “little conversation.”

One last summer thought.  I recall lightning bugs.  On the farm we would see hundreds of them just as it got dark.  They hung out by the woods.  I’ve caught my share and kept them in a jar.  I’ve held them in my cupped hands and then set them free.  They are something to marvel at.  Also known as fireflies, they are not flies at all.  They’re in the beetle family. So many different species. Not all of them light up. But those that do can use their lights to talk to each other.  Every pattern of flashes is unique to its species. Warning flashes and calling flashes.  Communication.  Males talking to females.  Females giving back a reply.  Do you know that all their energy (100%) goes out as light?   By comparison an incandescent light bulb produces 90% as heat and just 10% goes out as light.  Fireflies can appear green, yellow, or even orange. Some of them only flash for a short time at sunset—30 minutes and then gone.  Others stay longer into the evening.  Sadly, they are hard to find anymore.  We are losing them to light pollution and urban development. They don’t relocate.  They just fade away.  The last time I really saw them was on a camping trip in the small town of Lithia, FL about 6 years ago.  We were camping not far from Brandon but it felt like we were in the middle of nowhere.  Lightning bugs were flashing along the Alafia River.  Happy with the darkness and the marshy river grass. On and off their lights would go as they skimmed along.  A real summer memory.