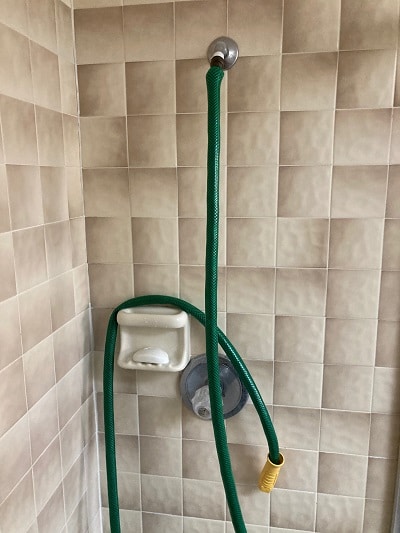 I used to drink from the garden hose when I was younger.  I also drank from faucets—kitchen, bathrooms, outside, wherever I was when I got thirsty.  Those weren’t as good, but they all did the job.  And doing so was quicker than getting a glass out of the kitchen cabinet when I was feverish with playing across all the yards in the neighborhood.

But we kids had to beware: while the water from an outside faucet came out cool from underground, water from a sunbaked hose could boil your lips.  It was a tradition of necessity to let the hose run for a while before quenching our thirst.

I drank from the hose into my late-300s (months).  Then some item on the news convinced me it was bad, so I stopped.  I now wonder if they were lying, using health as a means to promote bottled water, which was just arriving on the market en masse.  Now in my mid-late 700s, I’m still tempted to drink from the hose when I’m outside.  But I don’t.  I can’t remember what the health-people were afraid of, molds or fungi or what, but I believed them.  However, I also believe the memories of my younger self that hose water tastes better than faucet water, and even filtered water, and magnitudes better than plastic-bottles.

Recently I’ve decided that I’d prefer a garden hose in the master bathroom shower.  No nozzle of any kind attached, just the open end of a hose.  For a long time now we’ve had a detachable showerhead complete with different settings.  I’ve tried them all, and the only one I’ve ever liked is “shower.”  (The pulsing massage one pisses me off.)  Don’t get me wrong, some such gadgets are fun to use, but most of them are not necessary.  Well, except for sprinklers.  I’m not going to stand out in the yard for an hour oscillating.  But as in years past the little holes in the showerhead start clogging up, which makes the tiny streams come out with stinging velocity.  There are only two solutions, soak the head in vinegar, or buy a new one.

I suppose I could simply detach the shower head and its metal-looking spiral hose and rinse with the open-ended pipe, but my wife wouldn’t care for it.  She wouldn’t care for a hose either, but that’s what I would use, a length of garden hose highly flexible with at least four-ply so I could maneuver it around like a detachable head.  I’d rinse myself off much the same way as when I wash my car.  After a good scrub, I’d hold the hose above my head (the roof) and let the quick but gentle stream of water flow away the grime-filled soap, then position the hose over both shoulders (hood and trunk), and finally aim at the under parts, pits and privates (hubcaps and tires).

And most of all, I would drink from it.