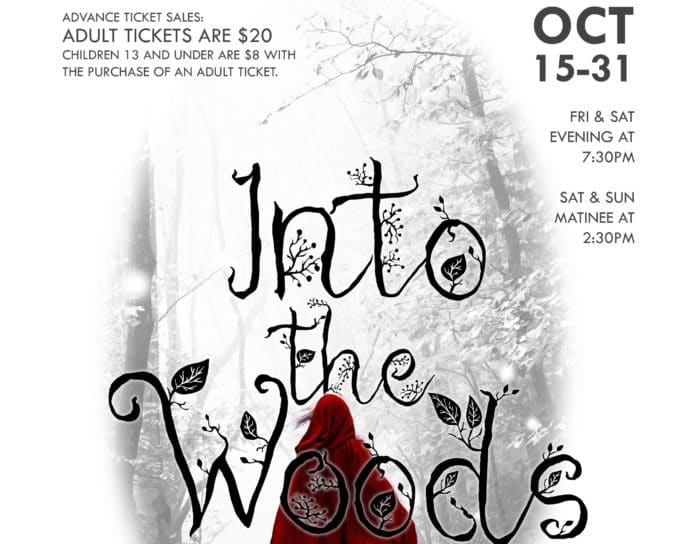 This Tony Award-winning theatrical production has been packing houses on Broadway (where it enjoyed a two-year consecutive debut run) and in other venues since its debut in 1986. Its film adaptation, premiering in 2014, was nominated for three Oscars and starred Meryl Streep, Anna Kendrick, and Chris Pine. Now, Live Oak Theatre–a not-for-profit 501 (C) (3) repertory company of local artists–is taking viewers Into the Woods.

Into the Woods will be performed from October 15 through 31 at the Carol and Frank Morsani Center for the Arts, 21030 Cortez Boulevard, Brooksville. Into the Woods is a musical with music and lyrics by Stephen Sondheim and book by James Lapine.  It features a baker and his wife as they embark on a journey through the woods to lift a curse.  They interact with several well-known fairytale characters such as Cinderella, Rapunzel, Prince Charming, Little Red Riding Hood, Jack (from Jack and the Beanstalk), and more on their way to their Happily Ever After.  Then “audiences get to see the Happily Ever Aftermath.”

“This show is a fascinating morality tale.  These characters all enter the woods, which represent the world, giving little thought to the choices they make along the way, or the consequences associated with those choices.  It is an amazing journey to watch unfold, and the life lessons are incredibly valuable,” commented Director Kyle Marra. “I know all of that sounds so serious, but the show, like life, is full of ups and downs. Moments that will make you burst into laughter, moments that will make you ponder, moments that will leave you feeling angry at characters, and moments that will tug at your heartstrings.  I feel like adults who choose to take their kids to see the show will leave with several great discussion topics about life, choices, and growth.”

Indeed, according to Marra, Into the Woods is a tale that teaches; imparting valuable and very positive messages to audiences in a fun, often lighthearted way.

“Into the Woods was chosen by the team for multiple reasons.  The first being its deeper look at the choices we make as we pursue that thing we wish for.  Do the ends justify the means?  Can we really make decisions free of consequences?  Are we always destined for a happily ever after?  It shows us that sometimes that thing we want isn’t really what it was cracked up to be. The most obvious (messages taught) would be the expected “Be careful what you wish for.”  Another huge one is, “Do my decisions affect others?” he said. “The second being the way the story is told.  It tackles the above questions with a sense of humor.  Characters often find themselves in ridiculous situations as they progress towards the thing that they want which makes staging a lot of fun.”

In taking the reins of this production, the cast and crew faced the imposing challenges of merging music, drama, and comedy in a single production.

“Timing is crucial,” said Marra. “If your timing is off, that joke you’ve been setting up will fall flat, you might not be singing the right part of the song, or that serious moment you’ve been building to might have the audience exiting in laughter rather than tears.”

In preparing for and researching their roles, cast and crew members found their own journey Into the Woods.

“Everyone came at it differently. I come from the camp of people who had exposure to the Disney movie,” said Marra. “As I read through the script in preparation for rehearsal I often would refer back to the movie for reference, but many in the cast went back to watch the Broadway version.”

Some involved already knew and loved this signature production.

“I’ve loved the show since I was ten years old, and I was fascinated with how Sondheim was able to take all of these characters from old stories and throw them all together in a way that makes sense in a hilariously fun and awesome way!” stated Choreographer Andi Garner. “I love it, it is charming when it needs to be, and it has heart when it needs to.”

In Garner’s eyes, the cast is up to the challenge of bringing Into the Woods to the stage.

“We have an amazing cast with a lot of new faces and some familiar ones as well!” Garner said.

“Every cast member brings something unique and special to the table that captures the fun and the heart of this show, and our production team is hard at work crafting a show that will be fully immersive for our audience. We can’t wait for people to come to see it!” Marra added. “What I can say is that we have some cool surprises in store for our audience.  This is a show they won’t want to miss.”

Seats purchased in advance for Into the Woods are $20 for adults and $8 for children ages 13 and under, when purchased with an adult.  Ticket prices at the door are slightly higher. Friday and Saturday evening shows are at 7:30 PM; Saturday and Sunday matinees are at 2:30 PM.

“Into the Woods is a fantastic metaphor for life, growing up, going out into the world, and chasing your dreams,” said Marra. “I hope audiences can learn from these characters in their triumphs and failures.  Go, chase your dreams, but remember actions have consequences.”