Here is a riddle. What costs 4.1 billion dollars and carries with it the likes of Helga, Zohar, and Moonikin Campos? The answer is Artemis 1. This is the first launch in a series of much anticipated moon missions. The current launch date is scheduled for Monday, August 29 from the Kennedy Space Center. A two hour launch window will begin at 8:33 am Eastern Time. Bad weather or other delays could push the launch to one of the alternate dates of September 2 or September 5.

Artemis 1 will spend 42 days in space on an unmanned test flight mission. During that time it will launch the Orion spacecraft to orbit around the moon. Just think, It takes four days just to get to the moon and not only will it go to the moon, but beyond. Orion will travel 40,000 miles past the moon! That is farther than any spacecraft built for humans has ever gone before! After orbiting for a time, Orion will head back home. This will be the challenging part because it must survive re-entry and then be retrieved for reuse. Splashdown is set for October 10 in the Pacific Ocean. Upon re-entry, Orion’s heat shield must endure temperatures up to 5,000 degrees! That’s half as hot as the surface of the sun!

Although there are no humans aboard this mission it will carry three mannequins designed to study the effects of space travel and radiation. Scientists know that cosmic radiation poses a major health risk. Data gained will help direct future missions. Why are the mannequins in female form you may ask? This is in anticipation of having women in space. By the year 2024 or 2025 NASA hopes to have the first woman (and person of color) walk on the moon.

Each mannequin is fashioned of material that is similar to the bones, soft tissues, and organs of an adult female. Two of them, Zohar and Helga, are torsos that will sit in passenger seats on the spacecraft. They have 5,600 passive dosimeters and 16 active radiation detectors to gather data. The active detectors will focus on areas mimicking the lungs, stomach, uterus, and bone marrow. Zohar will be wearing a sporty radiation vest developed by AstroRad, and Helga will not. A comparison between the two will be done to check the radiation vest’s effectiveness.

The third mannequin, Moonikin Campos, is a full size female type. She will wear an Orion Crew Survival System Suit and be strapped into the commander’s chair at the head of the capsule. Her chosen name is a “shout out” to Arturo Campos, an electrical engineer for NASA. He played a key role in bringing Apollo 13 safely back to Earth. He also represents diversity, as he was one of the few Mexican-American employees in an all white world. Moonikin Campos will have sensors to record acceleration and vibration during the mission. This will provide valuable data on how space travel impacts humans.

As with other space missions there are articles onboard chosen with much care. Artemis 1 will carry 120 lbs. of mementos and other items; there will be the Callisto voice technology that was developed show how commercial technology could benefit astronauts on deep-space missions, a touch screen tablet, and Amazon’s Alexa aboard (Alexa will not be your standard, off the shelf version). Both Alexa and the tablet will use NASA’s Deep Space Network and a local database aboard the spacecraft to communicate. They will send live audio and video between the spacecraft and the Johnson Space Center Mission Control in Houston. Cameras onboard will record the entire interaction. They will allow mission control on Earth to see and hear what’s going on during the unmanned mission.

Other items chosen for Artemis 1 have connections to the past. Everyone should recognize one from the Apollo program, it’s Snoopy! He’s the famous cartoon beagle created by Charles M. Schultz. In 1990 a plush Snoopy toy rode aboard the Columbia shuttle. Schultz drew comic strips and published books showing Snoopy in many adventures on the moon. Now over 30 years later Artemis will carry another plush Snoopy. He will even wear his own NASA spacesuit! He’ll ride along as a zero gravity indicator. Also in remembrance of the famous cartoonist , NASA will send up a pen nib used by Schultz. It will be wrapped appropriately in a space-theme comic strip.

Snoopy will not ride alone either. In collaboration with the European Space Agency he will be joined by Shaun the Sheep toy. Shaun is a popular toy in Europe and will be marking his 15th year in a big way, by traveling to space and back!

To encourage kids of all ages in the space program there will be four Lego mini figures aboard Artemis 1. They are part of the official flight kit. There has been a long collaboration between NASA and Lego which has gone on for decades. Lego has done many NASA theme play sets over the years and sent other mini figures on space missions. Lego Education hopes to encourage thousands of educators and students with its “Build to Launch” program. This is a ten week digital learning series in which students can get hands-on experience and be problem solvers. They can face challenges similar to those faced by the Artemis 1 team members.

What about all the employees and companies who worked on this upcoming inaugural flight? As a way of sharing with those who contributed there will be a Space Time Capsule. It will contain a collection of patches, pins, and flags. These items are just along for the ride and will be distributed among contributors after the items return to Earth.

What else has gone into space? In 1971, Apollo 14 took around 500 tree seeds aboard their spacecraft. They took douglas fir, loblolly pine, redwood, sycamore, and sweet gum. And now plant seeds and tree seeds are scheduled to ride along on Artemis 1 too. They will come back and be planted on Earth to study the effects. Seeds from Apollo 14 were dispersed later in the 1970s by the Forest Service. Many went out here and there without any formal record or documentation about their space travel. Many of those “Moon Trees” thrive today and have been planted somewhere around the country!

In all this preparation for this launch, our first “man on the moon” mission has not been forgotten. Artemis 1 will also carry an Apollo 11 mission patch, moon rock, and a bolt from one of Apollo 11’s F-1 engines.

Finally, from the Israel Space Agency comes a small but significant item. It’s a donated pebble from the lowest dry land surface on Earth, the shore of the Dead Sea. It represents travel from the lowest point on Earth to the highest realms of space. Artemis 1 will venture from Earth further than any human has gone before.

Some famous words from 60 years ago come to mind as we enter a new phase of moon exploration. In 1962, Scott Carpenter was at mission control during the launch of Friendship 7. Space was all so very new back then! Carpenter was searching for some encouraging words for his friend and fellow astronaut who would be the first American to orbit Earth. He had to say something! There was too much silence before the rocket firing and liftoff. What could he say to his friend? Then came the words, “Godspeed, John Glenn.”

It was a simple traditional English farewell. Carpenter’s words have become a timeless greeting for NASA ever since. It is a powerful message for today. Good luck to Artemis! Godspeed!

Photos relating to the launch of Artemis 1
1 of 6 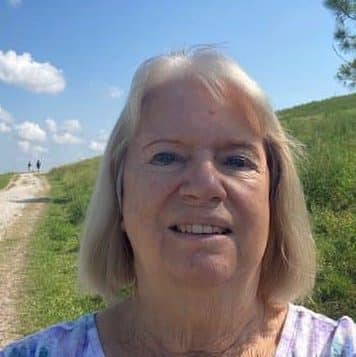