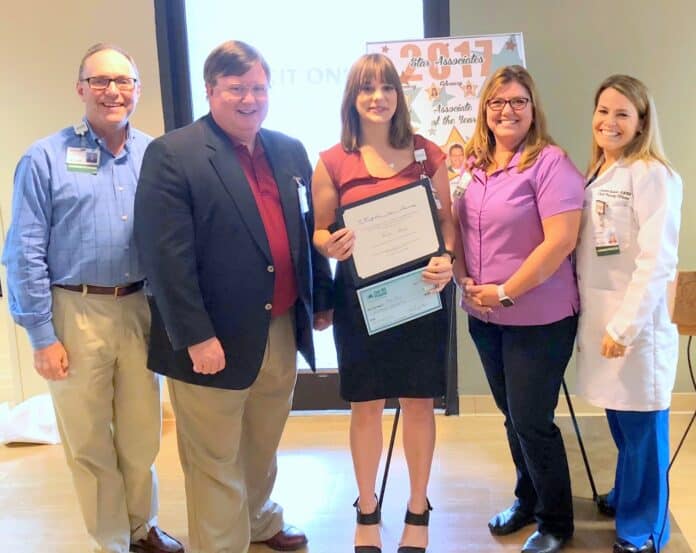 The Frist Humanitarian Awards honors outstanding individuals for the humanitarian and volunteer services. Named in honor of the late Thomas F. Frist, Sr., MD, founder of HCA and renowned humanitarian, this award recognizes individuals whose daily dedication and caregiving epitomize the highest standards of quality and personal commitment.

Katie Stacy has been recognized as a leader in Hernando County since her years in middle school. Her nomination for the award pointed out that she has been serving Oak Hill Hospital and this community for many years. She previously served in a coordinator capacity at the Early Learning Coalition, which focused on the education of preschoolers and she gave back to her community during numerous children’s activities and events during her tenure with them. Her career with Oak Hill Hospital started over four years ago and since that time she has made a tremendous impact with the quality of her work as the marketing coordinator and in the community in many, many ways:

·         She was a vital part of the teams with the American Cancer Society; Mrs. Stacy was a vital part of the teams in support of breast cancer at Relay for Life and Making Strides Against Breast Cancer events every year.
·         At her young age Mrs. Stacy has already served as a past president and is regarding by her membership as perhaps the best president in the 10-year history of the Kiwanis club in the community. She was also communications chair and managed Facebook accounts, websites, and newsletters. She not only managed them but kept them vibrant by telling the Kiwanis story in every compelling way with each article she wrote.
·         She plays a significant role in making the Great Hernando Weight Loss Challenge a success for the community. She serves as the administrator and is responsible for keeping the records of all 700 members on a weekly basis.
·         Mrs. Stacy is instrumental in the success of a multitude of special community events throughout the years such as Kids’ Marathon, Greatest Baby Shower, Kids Safety Fair, Citrus Women’s Health Faire, Blueberry Festival, and many others. She has a reputation as an organizer, a communicator, and a motivator. She is engaged in everything she does.

“Katie is a shining example of a leader who continually strives for perfection and a role model for members of our community,” said Rich Linkul, Marketing Director, and her direct supervisor.

Ms. Sugg has served as a volunteer at Oak Hill Hospital since July 2014 and has already been named the organization’s president. She began volunteering in the North Tower in 2014 and in 2015 she became its chairperson. In a short time, she grew that organization from one or two active volunteers to a full team of 24 volunteers on three shifts from 5:30 in the morning to 4:30 in the afternoon. She was recognized for developing training materials for the North Tower positions. In 2016 she was selected as volunteer secretary and in 2017 was nominated and elected as the association’s president.

Her outside activities are quite extensive. For example, she develops and manages the suicide prevention program in the community, improves access to healthcare and food, clothing, and shelter for underserved populations and economically disadvantaged. She is also known as a principal fundraiser for community health projects, disabilities, and adaptive technology education.