Spring Center comprehensive plan amendment will be transmitted to state 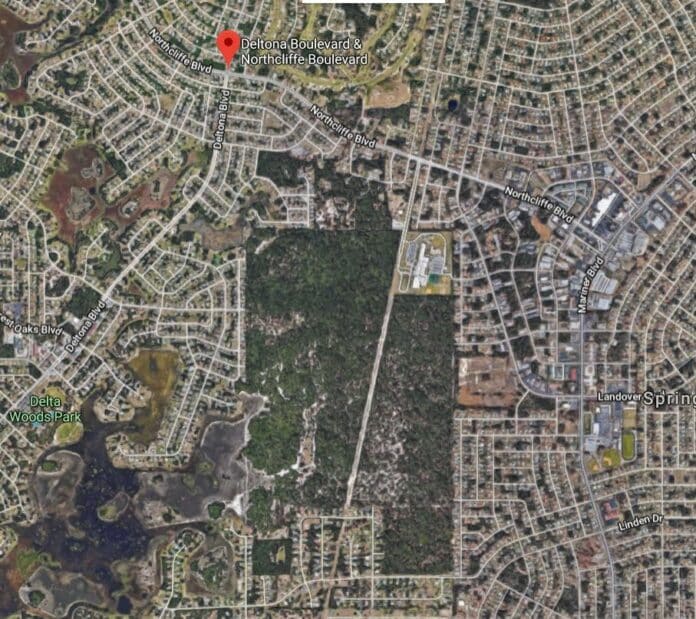 The comprehensive plan amendment for the 450 acre Spring Center development was discussed again at the regular Board of County Commissioners (BOCC) meeting on April 10, 2018.  Assistant County Administrator Ron Pianta opened the discussion, reminding the board and those in attendance that the purpose of the discussion was for the board to consider the amendment, the background information, and to determine whether or not to transmit the amendment to the state’s Department of Economic Opportunity.   The board unanimously voted to transmit the amendment.

Several area residents have been in contact with the commissioners as well as County Planner Cayce Dagenhart, concerned about their homes, many voicing concerns that they’ll lose their property to Eminent Domain.  Chairman Steve Champion used the term “fake news,” and confirmed with staff that Eminent Domain does not apply to the homes bordering the intended city center.  County Attorney Garth Coller added that it’s against the law for the county to act on behalf of a developer to take property from an owner.  However, it is legal for the developer to negotiate sale of property with an owner, but a property owner cannot be forced to sell.
Dagenhart and Planner Omar De Pablo reviewed the maps of the 450-acre tract of land, bordering immediately west and south of Explorer K-8, extending west to River Road and south to Running Oak Court. The eastern-most border will run adjacent to Jason Road and Greynolds Avenue. The planned development district will include a central hub for retail and commercial offices, and county offices are envisioned as well, such as offices for the Fire Department and Sheriff’s Office.

The “Town Center” layout is also expected to include 3,000 new residences, consisting of single family homes and multi-family structures, with the highest density housing closest to the commercial hub. The plan also includes a 20-acre park immediately west of the school, and expansion area for the school to the south. Several “pocket parks” are also planned throughout the area.

The county staff reiterated several times that the zoning map shown is “just an idea” right now, to amend the future description in the Comprehensive Plan.  Rezoning is not approved yet, and not the item up for the April 10th vote.

All commissioners are in support of the proposed amendment, however most residents are opposed, concerned about traffic, the loss of greenspace, and that the development will bring big-city problems to an area where people moved to escape a large city.   Supporters of the plan think the development will result in less population density, than if the property was developed only with single-family homes. Commissioner John Allocco said the development could actually prevent “suburban sprawl.”
Included in the amendment is a policy that states that the developer will conduct traffic, water, and other engineering studies at each phase of the project.

Water-supply already seems to be a pressing issue as reported last week in an unrelated article on commissioners denying the sale of water to a Paso development.  According to a Hernando County Utility Department analysis report, upcoming infill developments will be problematic in terms of water supply.  The Spring Hill Town Center project will add 450,000 gallons per day in residential water usage and 100,000 gallons per day in commercial water usage.  The report states, ‘When the subject of water supply was mentioned during this meeting (July 26, 2017 pre-application meeting), a SWFWMD representative present stated decisively that no additional water withdrawal would be permitted in the Spring Hill area. Any additional water withdrawal would have to be from the north or eastern regions of the County. The utility has initiated capital projects to add one or more water plants and associated wells in the eastern service area, but these are only in the planning stages now and will not be available to provide water for the western service area for many years. Once available groundwater sources have been depleted, the county will have to move to more expensive and less desirable water sources, such as reverse osmosis and direct potable reuse.’ ”

The Spring Center developer will be working closely with the appropriate engineers to remedy any arising issues.

Future public hearings and workshops are expected, and no work is expected to start for 3-4 years. and The Hernando Sun will continue to follow developments.