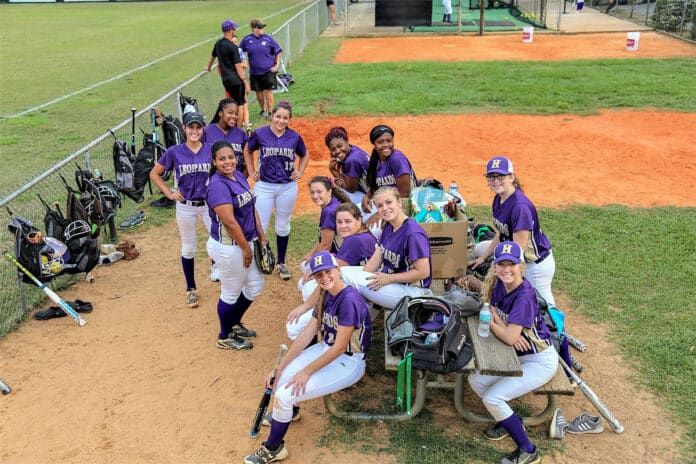 Friday night May 11, 2018 at Tom Varn Park, the 2018 5A Regional Softball Finals are almost ready to get underway.  Hold onto your seats, because this game is going to be

Both Hernando High and Keystone Heights High Schools are just one step away from going to the State Semifinals.

It’s a muggy night here at Tom Varn and it’s a packed house. Fans are completely surrounding the field and ready to cheer on their teams. A moment of silence, our National Anthem.  Okay everyone’s ready, Let’s Play Ball.

Ashleigh Jennings will be the first to step up to plate tonight for Keystone. Jennings’ bunt is picked up by Hayden Kimbrough and thrown out at first.  Ashton Ludwin is up next- she strikes out which makes 2 outs. Bailey Story steps up and hits just out of reach of shortstop Alyssa Forte and Story makes it to first.  Molly Crawford hits a fly into left and was run down and caught by shortstop Alyssa Forte making the 3rd out.

Ali Shenefield is the first batter up for HHS. She hits to the pitcher and is thrown out on first. Next up is Karli Kimbrough. Karli hits a drive to second baseman Ashton Ludwin and is thrown out at first. Taliyah Dowdell steps up to the plate and pops it up. The ball is caught making the 3rd out.

Cami Worley strikes out, for 1st out. Savannah Channell gets a base hit out to left field, runner is on first. Pitcher Megan Moncrief is up to bat and strikes out making 2 outs. Makayla Smith hits a hard drive right through center field and Keystone has runners on first and second. Lexi Northway is up and bunts, caught and thrown out on first making 3 outs.

Madyson Lamp starts off this inning. Lamp connects with ball and it’s GONE… Homerun!!  Janea Mobley steps up to the plate, Mobley slams it to left field and is now standing on second base. Sammi Burnett bunts and is thrown out on first.  Sabrina Burr bunts and pitcher throws Burr out on first. Mobley steals third. It’s Nakayla Roberts’ turn up to bat and she drives it past second base and gets on first, while Mobley comes home with the second run for HHS. Hayden Kimbrough hits to the pitcher and is also thrown out at first making 3 outs.

Up for Keystone is Ashleigh Jennings, she hits to third base but Madyson Lamp just didn’t get the ball to first quick enough. Jennings is safe on first. Ashton Ludwin bunts to the pitcher and is thrown out at first, 1 out. Bailey Story steps up to the plate and for a second time this game hits past shortstop Alyssa Forte. Sabrina Burr picks it up and throws to home to get Jennings out, but over throws catcher Taliyah Dowdell. One run for Keystone and Story is on second base. Molly Crawford strikes out. Cami Worley makes the 3rd out for Keystone leaving Story on base.

With 2 runs for Hernando and 1 run for Keystone, Ali Shenefield is up to bat and hits it out to center field and the ball is caught by Ashleigh Jennings. Out 1. Karli Kimbrough hits a grounder to second base Ashton Ludwin and Kimbrough is thrown out at first. 2nd Out. Taliyah Dowdell Pops up, it’s caught making out number 3.

Savannah Channell is up- she pops the ball and it’s caught by Janea Mobley, 1st out. Megan Moncrief also pops up to short stop Alyssa Forte making the 2nd out. Makayla Smith continues with another pop up to pitcher Ali Shenefield and that makes the 3rd out.

Hernando will now go up against a new pitcher for Keystone: Daelynn Eatmon. Madyson Lamp will be the first to stand up to the pitcher and is walked to first. Janea Mobley hits a drive and it’s bobbled and now Hernando has runners on first and second.  The next three batters Sammi Burnett, Sabrina Burr and Nakayla Roberts either strike out or go down swinging making 3 outs with two runners left on base.

Lexi Northway strikes out. 1st out. Ashleigh Jennings is hit by the ball and goes to first base. Ashton Ludwin and Bailey Story both hit straight to pitcher Ali Shenefield and both were thrown out on first making it 3 outs for Keystone.

The HHS announcer Mr. Dowdell riles up the crowd. Hayden Kimbrough is up first this inning and is walked to first.  Keystone catcher Bailey Story tries to pick Kimbrough off at first but doesn’t make it.

Ali Shenefield gets up to bat and is walked to first while Kimbrough goes to second. Sub runner Lauren Sullivan comes in for pitcher Ali Shenefield. Karli Kimbrough gets the first out for the Leopards. Taliyah Dowdell hits to third and is thrown out on first and now Hernando has runners on second and third. Madyson Lamp gets up to bat and a decision is made to walk Lamp and it loads up the bases for Hernando. Janea Mobley slams a shot to right field but is caught by Madison Heskett making it 3 outs.

Molley Crawford pops out to center and the ball is caught, out 1. Cami Worley hits a shot to left field and gets on first. Savannah Channell slams one to center field and a beautiful catch was made by Karli Kimbrough while she jumped through the air to make the second out. Daelynn Eatmon struck out making it 3 outs.

Fans are going back and forth to see who chants the loudest for their team. Crowd is going wild. Tom Varn is rocking tonight.  Sammi Burnett is up first this inning and strikes out. Sabrina Burr is now up- she hits to second and is thrown out at first. Nakayla Roberts is up and also strikes out, making it 3 outs.

The start of inning, Hernando with 2 runs and Keystone 1. Last chance for Keystone to step up and either tie or win the game with 3 runs. The crowd is up on their feet, cheering for their teams. First batter for Keystone is Makayla Smith who hits to left and short stop Alyssa Forte makes the catch for the 1st out. Lexi Northway gets a base hit to left and gets on second. Ashleigh Jennings hits to pitcher Ali Shenefield who bobbles ball and Keystone now has runners on third and first. Jennings stole second base. Ashton Ludwin steps up to the base and strikes out making 2 outs. Bailey Story steps up and hits hard down center field and 2 runs come in for Keystone making it 3 runs total. Story stole second. Molly Crawford pops up and it’s caught by Janea Mobley making 3 outs leaving Story on second.

Need I say more, Crowd is going crazy. Table has turned and now Hernando needs 1 run to tie or 2 to win. Fans are not sitting down for this inning for sure. Hayden Kimbrough steps up first, hits to pitcher Daelynn Eatmon and is thrown out on first. Out 1. Top of line up for Hernando Ali Shenefield hit a line drive straight to short stop Molly Crawford getting the second out. Karli Kimbrough is up and hits to second and is thrown out on first making the third out. What an upset for Hernando, the Leopards went down fighting. If Tom Varn would have had a roof it would have been lifted by the cheers from the Keystone Heights Fans.