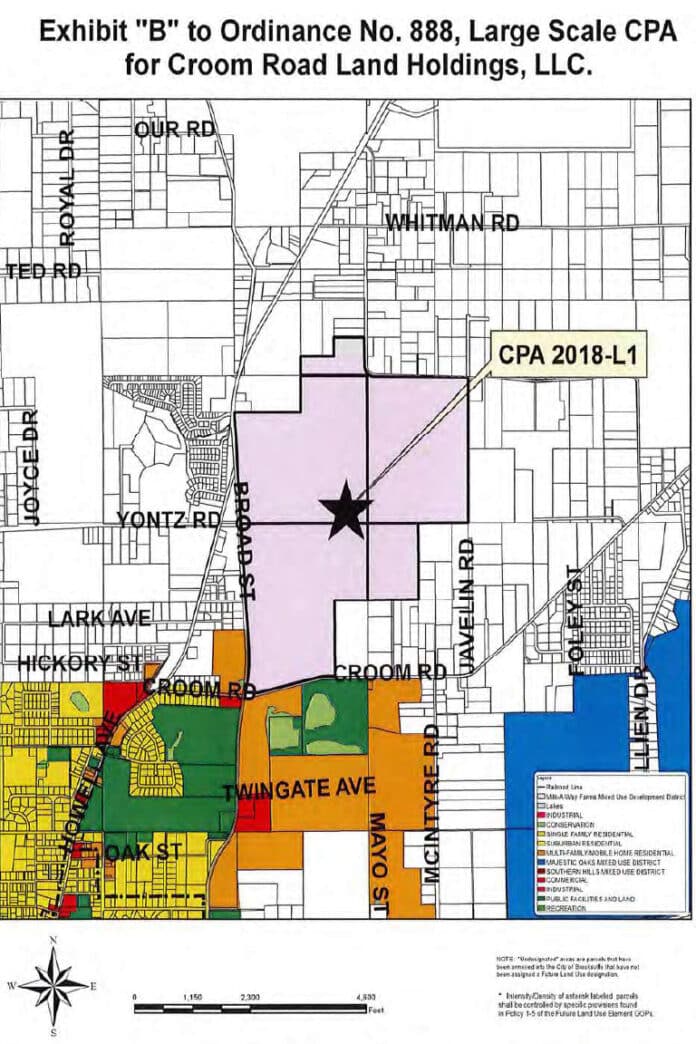 At the regular Brooksville City Council meeting on May 7, 2018, the council voted 3-2 to approve amendments to the future land use map, and elements of the city’s Comprehensive Plan regarding a 440 acre property to be zoned Planned Development Project (PDP), designated as the Milk-A-Way Farms Mixed Use Development District (MFMUDD).

The sprawling property with scattered live oaks, was once a dairy farm. The now dilapidated structure off of 41 was where they sold animal feed to the public.  The amendment would allow for 999 dwelling units and 50,000 square feet of non-residential floor space, to consist of multi-use trails and recreational areas.

The property’s southwest corner is east of Broad Street and north of Croom Road.  Its current designation is Commercial, Residential, Rural and Conservation (Hernando County).  The irregularly-shaped footprint spans as far east as Javelin Road, and north to unincorporated areas near Jacobsen Road.

The stated 999 dwelling units was decided upon to avoid the designation of Development Regional Impact (DRI).  A DRI designation would come with additional changes to the Comprehensive Plan, and a more in-depth rezoning process required by the state.  A conceptual map showing the intended area of homes, parks and other planned areas was not shown during the May 7th meeting, but is expected in future meetings. The residential and other building areas are planned for the northwest section of the property.

City Planner Steve Gouldman began the presentation to the council, describing the area and intended changes. Before development begins, area roadways and traffic will be studied, at the developer’s expense.  A variety of city and county parks are near the property, and parks are to be built into the plan as well. Problems exist with the property being within an A / E flood zone. To remedy this, the developer will need to meet Southwest Florida Water Management District (SFWMD) and Federal Emergency Management Agency (FEMA) requirements.

The Hernando County School Board calculates that the new plan will generate 412 students, though an age and grade breakdown wasn’t available, Brooksville Elementary would be over capacity, and the developer would need to resolve the overage.  Moton Elementary is the adjacent school district that could be considered. Council Member Natalie Kahler calculated 318 students walking along US 41 potentially.

According to Don Lacey, Senior Vice President with Coastal Engineering, the city can install crosswalks on the property side, adjacent to the state road, as well as install markings and crosswalks.

The area, which Lacey describes as an “interesting and challenging piece of property,” includes wetlands, as well as a large area of floodplain.  Council Member Joe Bernardini was most concerned about the prudence of building homes in such an area, when the city has already seen problems with areas such as Candlelight and Cloverleaf — the latter requiring Humvees to reach residents in distress after hurricane flooding. Bernardini also cited several areas of congestion which would worsen with added traffic.

Lacey responded that the flood-prone areas can be improved with development, and the traffic problems can also be addressed.

The Planning and Zoning Board voted unanimously to go forward with the amendment, and the City Council passed the ordinance 3-2, with Council Member Joe Bernardini and Mayor Betty Erhard voting nay.