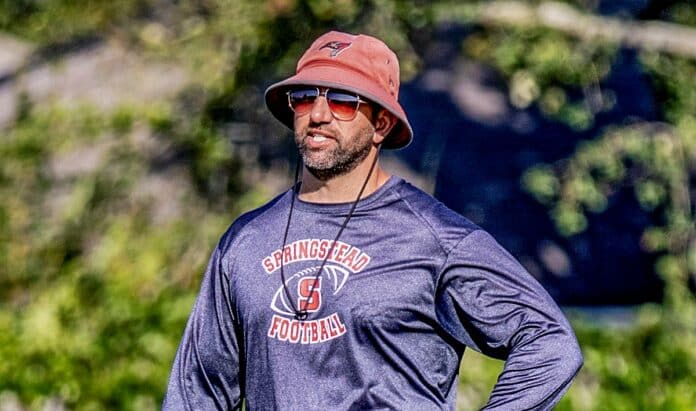 Springstead High School just narrowly missed out on the playoffs last season in Class 6A after finishing the season with seven wins. In past years, the Eagles would’ve been a qualifier for postseason play based on being the runner-up squad in the district. Because Springstead finished in second place behind Mitchell in Class 6A, District 6, the Eagles fell just short. We asked Springstead coach Mike Garofano five burning questions heading into the season.

AV: You guys just missed out on the postseason last year because of the new FHSAA format. How much is it driving you guys this year to win the district?

MG: We’re definitely motivated that’s for sure. I’m not a fan of the new system. You don’t know if you made the playoffs until the Sunday after the last week of the season. It takes away some of the excitement of your in season district games if you’re not a district champion. We have to win the district to assure ourselves a spot so that’s our goal.

AV: With Sims and Fribley back, is this your best backfield you ve had yet?

MG: We have a lot of weapons in the backfield this year in addition to Sims who was almost a 1,000 yard rusher in 8 games last year, we have Junior returning started Anthony Alexis and four guys that can run fullback for us without missing a beat. Damian Giles, Toby Rahman, Adrian Cabrera, and Albert Rodriguez. This is probably the deepest backfield we’ve had since I’ve been here.

AV: Who would you consider your guys top rival?

MG: Every game is a big game for us with this playoff format you have to win them all. Of course all of the in county games are big rivalries but none of them are district games so they don’t mean quite as much but they’re always competitive. With that being said Nature Coast is always our biggest rival.

AV: What are the goals and expectations you ve set for this team?

MG: Our goal and expectation is a district title. We have the talent to do it. It’s just a matter up putting it all together, executing, coming together as a team, and our effort.

AV: With Mitchell losing a lot from last season, do you feel you guys are the favorites to win the district?

MG: I really don’t know who’s the favorite. You need a lot of things to happen your way to win the title. Have to execute on offense, defense, and special teams, stay away from injuries, and come together as a team and have everyone buy in to what we’re trying to do. I love the group of guys that we have; they work hard and have done everything we’ve asked of them up til now so we need to keep it rolling if we want to be successful.