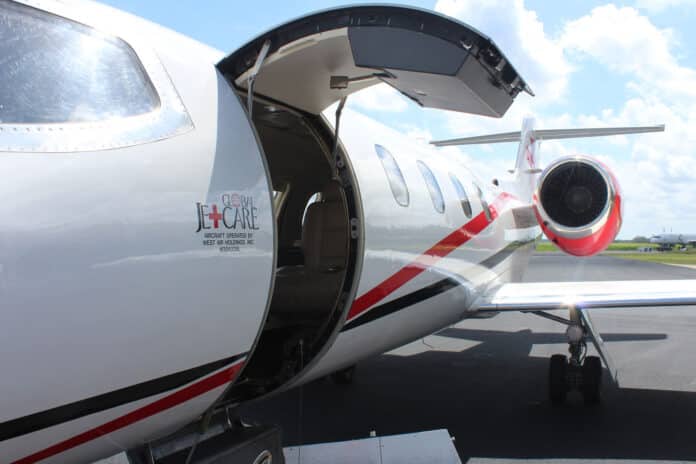 It was an exciting day for Kathleen and her friends at the Arc Nature Coast.  Kathleen was near tears as she exclaimed, “That is the best thing I’ve ever done in my life!”

It was her idea to let the crew at Global Jetcare load her into their Learjet on a gurney as if she was one of their patients. Global Jetcare flies all over the world in order to transport the ill or wounded for medical treatment.

The rest of the group of about 20 special needs individuals who are part of The Arc Nature Coast program and 6 volunteers remained inside Global Jetcare headquarters and watched through the window as Kathleen was carefully strapped in, hoisted up and brought through the small doorway of the plane- an engineering feat in itself.

What her friends weren’t able to experience were the words of encouragement Kathleen received from Chief Flight Nurse Marcy Phipps, Flight Paramedics George Davis and Will Constantine and Chief Pilot Mark Patton. They told her how brave she was and how her friends must also think so.

Kathleen was unable to board the plane like the others during the tour since she has a shoulder problem that prevented her from being able to go up the steps and into the plane.

Once inside the plane, she sat up and took a look around. It is certainly a tight squeeze in the plane which has about 4 passenger seats and a space for the gurney.

The crew assisted her down the steps and back inside the Global Jetcare headquarters where she was greeted with excitement.

Christina Gray and her son Bart have been operating Global Jetcare for nearly 10 years.  About a year ago they expanded into a new building at the Brooksville-Tampa Bay Airport and this year they added two Learjets to their fleet. Now they have a total of five jets: 1 Learjet 35 and 4 Learjet 36.

“We’ve been to every continent in the world except for Antarctica,” said Christina Gray. They fly about 400 flights per year and a flight can range from 2 to 40 flight hours. Global Jetcare has 32 employees consisting of nurses, paramedics, pilots and mechanics. They also have 5 part time doctors on staff. Each flight has a flight nurse, paramedic, a doctor if needed and two pilots.

She also arranged for The Arc Nature Coast clients to come out to the Global Jetcare facility and tour the airport control tower. The control tower was a big hit and most everyone said they enjoyed that the most.

Christina had a craft prepared for the group: a picture frame to decorate so they can remember the special day.  Photos were printed out of everyone wearing their Global Jetcare t-shirt and placed in the decorated frame. Another frame was provided for a group photo.

Nurses Tara Earls and Marcy Phipps showed them how the heart monitor works.  Anyone who wished, was hooked up to the monitor to see their own heart beat. A reading was printed out so they could take it home to show their family.

Marcy, Flight Paramedic George and Pilot Mark shared stories with The Arc clients about some of their travels.  Marcy recounted a trip to Bolivia to transport a girl that was bitten by an alligator while swimming. She was flown back home to Germany for plastic surgery and is doing fine now.

George recalled a flight to the Ukraine to pickup a teen who fell on a train track.  They took him to Boston for treatment of severe burns.

Mark said he enjoys flying a particular client that needs to travel from New York to Florida twice a year for medical treatment.  He said she can’t move very well so it’s their job to make sure she is okay. She travels with her husband and their golden retriever. Mark said, “I love dogs.  It’s pretty unusual to take a dog on the plane. I really enjoy that.”

“We appreciate when our community embraces our population,” said Nancy Stubbs.

“But it’s not too often a business goes this far to accommodate us,” she added.

Mark Barry said, “We’ve heard from everyone that it was the best day they’ve had at The Arc.”