Job-A-Palooza event offers experience in the world of work 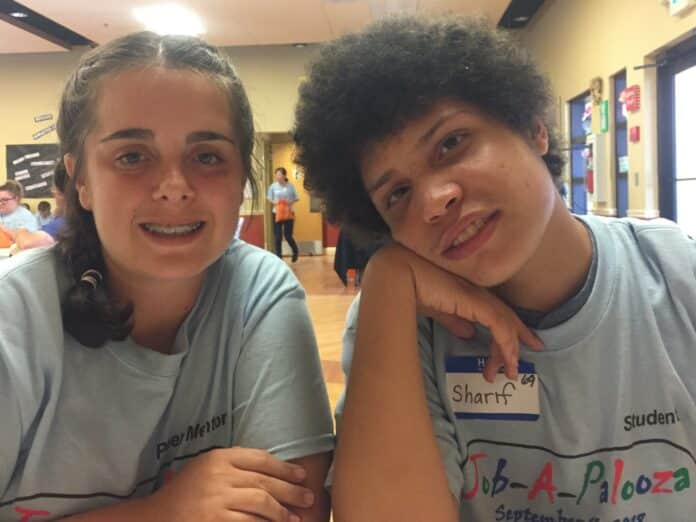 On Saturday, Sept. 15 participants of the Arc Nature Coast along with clients of the Lighthouse for the Visually Impaired and Blind had the opportunity to experience and learn skills needed for various jobs. Approximately fifty young people ages fourteen to twenty-one  and more than fifty peer mentors ages sixteen to twenty-four participated in the first annual Job-A-Palooza at the Arc Nature Coast campus in Spring Hill. The event was sponsored by the Arc of Florida and funded by a grant from the Division of Vocational Rehabilitation.

Nicole Bruster, a real estate agent with Exit V.I.P. Realty in Weeki Wachee got involved with the event because her fiancé, Chris Parker, works for the Arc Nature Coast. Thirteen students came to her table and filled “goody” bags that she uses as Thank You gifts for her clients.

“I thought that this was a great opportunity for me to help out. There were different levels of skills among the students, but they all want to be independent. They want to do well and they were all very enthusiastic about the task,” Ms. Bruster remarked.

Eighteen-year-old Sharif Corbin, a student at River Ridge High School in New Port Richey and a client of the Lighthouse for the Visually Impaired was one of the students who participated. He is skilled with all phases of computer technology, from programming and diagnosing problems to designing computer games. Sharif would like to get a job in that field when he finishes school.

“What I like about Lighthouse for the Visually Impaired & Blind is that it’s helpful for kids who need to learn how to go through life with their visual impairment. It helps them to be independent, so then you don’t have to always have people do things for you,” Sharif stated.

He and his seventeen-year-old mentor, Chloe Naughton had just met that morning. A junior  at Hernando High School, she is part of a group called the Pit Crew. Members of the group are each assigned a student whom they help with his or her school work.

“What I like best about being a peer mentor is getting to know the kid because you kind of think of them as different and not like us, but they are awesome people. I like hanging out with them. They’re not just somebody with a disability; they’re a human being who is actually maybe better than someone without a disability,” Chloe remarked.

Seth Rider enthusiastically set to work on his job of stuffing envelopes at the Hernando Sun‘s table. He finished a record number in his five minutes and even came back later to do more. However, he confessed that stocking shelves and bagging groceries at the Publix table was his favorite task.

“I want to be a firefighter or EMT in the future, but I’d like to get a job at Publix to pay for school,” Seth stated.

His mentor was Desiree Anello, an 11th grader at Springstead High School.

“This is my first time being a mentor. I also volunteer at Oak Hill Hospital doing paperwork, delivering food to patients and other jobs. I want to go into the medical field when I  graduate,” said Desiree.

At the end of the day, Interim School Superintendent John Stratton awarded medals to all the students. On hand to congratulate them were Arc of the Nature Coast board members Mike Prescott and Teri Nichols, as well as school board member Linda Prescott and Supervisor of Exceptional Student Services, Judy Everett.

Job-A-Palooza was a rewarding experience for everyone involved – students, peer mentors and employers. An email sent to Mark Barry, Executive Director of the Arc Nature Coast by  one of the participants’ mother stated this very well.

“My son had such a fun, learning experience and his self-esteem has definitely improved as a result of this event. He proudly reviewed his evaluations with his father and me and the way in which he held onto his medal to show off to family and friends was priceless. What I especially appreciate about this event is the mentor aspect. To have “typical” individuals involved in supporting those who have developmental disabilities is what this community needs most- what this world needs most!”