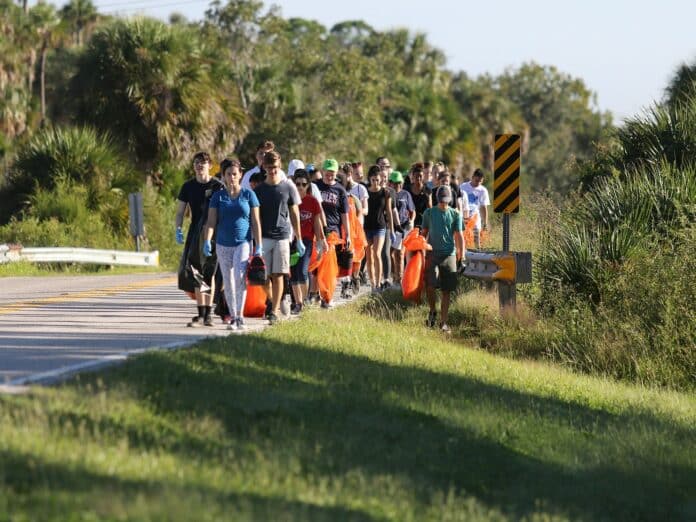 Brittany Hall-Scharf University of Florida Sea Grant Agent for Hernando County organized the event along with staff from UF/IFAS Extension Hernando County and community volunteers with the help from local sponsors.

“We only had 36 people show up last year (due to Hurricane Irma) and this year we have a couple of hundred,” Brittany Hall-Scharf said. “This is fantastic to see this much of a turn out, it really surprised me…it really makes me happy to see everybody out here.”

It’s important to get the kids involved.

“Getting them out and about and actually seeing the litter – hopefully they will think about where this comes from and how did it get there,” Hall-Scharf said. “It might make them a better steward to make sure that they’re not leaving those same things behind that they collected from the Coastal Cleanup a few months back.”

“This not only gives us community service hours, we’re helping out,” said Ambar Mota-Martinez, President of the Key Club. “We found a lot of trash, cigarette butts and I think it really gets the word out there. It promotes saving the environment and keeping it healthy.”

“You have to plan to save the earth, you should take pride in your earth and pride in being part of the community,” Krestin Abbene said. “Our generation is seen to be so terrible, these simple things can really change people’s opinions about this generation.”

“If people recognize us as the generation that cleans up and encourages future generations to continue the same, we can hopefully reduce the amount of trash that we have in our environment,” said Isabelle Campesi member of the Key Club.

Rich Massa, along with his wife Tammy and their four-year old daughter Malery participated in the Coastal Cleanup.

“It’s teaching the whole thing about being able to give back and be able to serve and help your community,” Massa said. “Sometimes people lose sight of doing simple things like picking up garbage and being able to show her (Malery) the values of hard work and trying to do something for someone else.”

Each volunteer that participated in the cleanup was handed a trash collection data form card. The two column card lists a number of most common items found during cleanups as well as other items like appliances to personal hygiene. The cards are filled out while collecting litter and turned in.

Last year volunteers that participated in the Coastal Cleanup collected over 2000 pieces of trash, 40 percent of that was plastics and the most common items collected during cleanups are cigarette butts, plastic bottles as well as beverage cans, food wrappers and plastic bags.

According to Ocean Conservancy 2017 trash collection report; the items collected in the United States were as followed; 842,837 cigarette butts,  345,241 food/candy wrappers, 242,534 plastic bottles.

To learn more about the International Coastal Cleanup visit: https://oceanconservancy.org