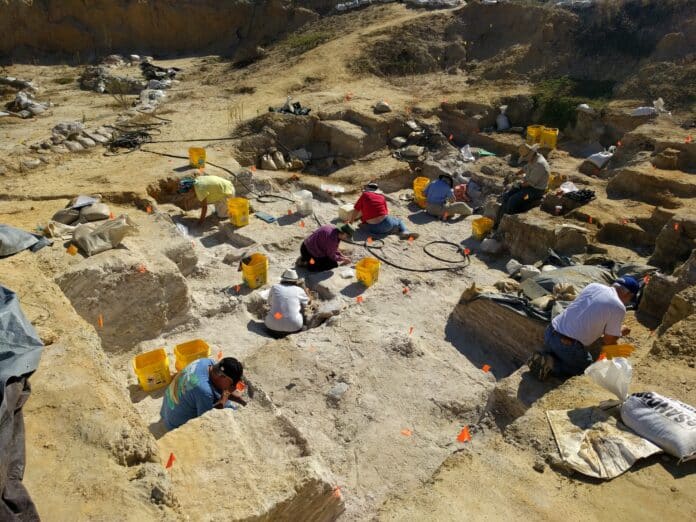 National Fossil Day is a celebration organized to promote public awareness and stewardship of fossils, as well as to foster a greater appreciation of their scientific and educational value.
-National Park Service

Have you ever wondered about what lived millions of years ago? Well, it’s a little more than just digging up layers of the earth, there is a valuable educational process that goes into being a fossil hunter (paleontologist). In honor of National Fossil Day on Oct. 17,  I spoke with two young paleontologists involved with the Florida Museum of Natural History to get an idea of what their profession is like.

Michael Ziegler earned his Bachelor’s of Science in Environmental Science at Georgia College, with a minor in Geology.

He is currently a Masters student in the Department of Geological Sciences conducting a site formation analysis of Montbrook in order to better understand the site’s paleoenvironment and why there is such a rich deposit of fossils there.

The Montbrook dig site is located on private property near Williston, FL in Levy County.  The owners of the property contacted the Florida Museum of Natural History after finding fossil specimens on their land.  As of Sept. 2018, researchers and volunteers have identified and catalogued over 30,000 fossils from the site.   There have been two digging seasons so far- first between Nov. 2015  and May 2016, the second from Oct. 1 2016 to  May 21, 2017.  The upcoming digging season is scheduled for November and early December 2018. This location is just one of the thirty-three sites in Florida where fossils have been excavated.

“My interest in studying Paleontology evolved from my passion for Geology. Boy Scouts was a huge part in developing my interest in Environmental Sciences. During my undergrad at Georgia College, I was able to conduct some research on Bison latifrons (one of the largest hoofed animals to ever exist) with my Geology professor Dr. Mead. I quickly became captivated with the phenomenal history fossils and their accompanying localities record,” Ziegler stated.

The recent discovery of fossils in Williston, FL was paleontologist’s dream and led to a better understanding of what animals inhabited Florida millions of years ago.

“Montbrook is what I like to call a ‘surf & turf locality’ since we are finding both marine/freshwater as well as terrestrial fossils onsite. As a site, Montbrook is a late Miocene site around (5.5 to 5.0 million-years-old). There are other sites of this age in Florida, but Montbrook is important since it is the first site found in northern Florida of this age that has fairly complete aquatic/terrestrial fossil specimens,” Ziegler explained.

For students interested in a career in the field of paleontology, Ziegler advises not to take any experiences you have for granted.

“Because they help you form a unique set of skills. For example, for two summers I worked as a custodian at my old high school. It may have felt irrelevant at the time, but this summer job allowed me to get hazardous waste certification, a resume worthy certification that helped me be better prepared and land a job in my college’s environmental science chemistry lab.”

He added, “Also, having an interest in exploring, not just geographically because you often travel in these types of careers, but individuals who are aren’t intimidated to try new techniques. A general interest in pioneering while learning from the past.”

Rachel E. Narducci (27), a Research Assistant at the Florida Museum within the Division of Paleontology became interested in fossils from a movie.

“The movie ‘Jurassic Park.’ I was obsessed. In Kindergarten our parents took us to see a showing in Jacksonville and I believe a mall in Jax (Jacksonville) had animatronic dinosaurs. It was a magical experience. My friends and I wrote a pact that ‘at the old age of 17 we would meet back up again and become paleontologists together,” Narducci said.

“The best part is finding fossils. When you uncover something at the site, you are the FIRST person who has ever seen or touched that fossil. And it’s just been hanging out in the ground for about 5 MILLION years.”

Ziegler remarked that some his favorite experiences during his time at Montbrook was working with school groups that come dig with them.

“In fact, last field season we had a group of students come from Gainesville High School and excavate fossils prior to attending Prom. Montbrook allows people of all ages to get an inside look and contribute to active scientific research.”

October 17 is National Fossil Day, and you can help bring awareness for all those creatures that walked, crawled, swam and flew right here in Florida by getting involved as volunteers.

If you’re 15+ years of age you can volunteer to excavate at Montbrook (https://www.floridamuseum.ufl.edu/montbrook/get-involved/)

• Visit Florida Museum of Natural History in Gainesville, FL
Check out what living things roamed around Florida millions of years ago and see fossils excavated from the Montbrook dig site.

• Cool activities for everyone anywhere:
Enter the 2018 Art contest and kids can learn how to be a Junior Paleontologist
https://www.nps.gov/
subjects/fossilday/index.htm