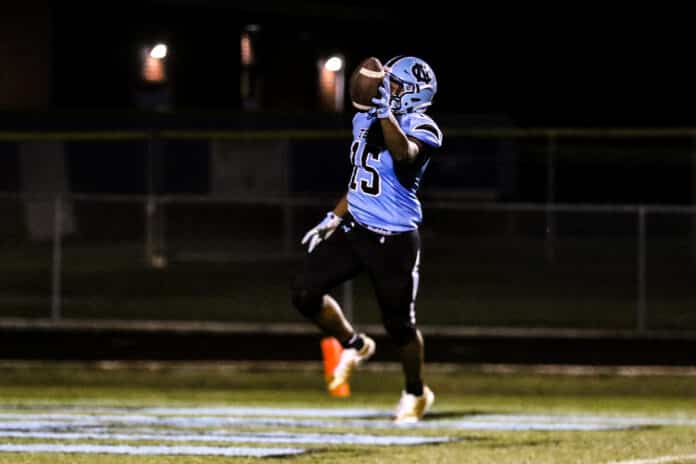 Coming into last Friday’s contest against the Citrus Hurricanes, the Nature Coast Sharks offense has usually been well-documented: the team will have a workhorse-style running back to lead a dominant ground attack en route to close wins or blowouts. That said, in recent years, the team has been experimenting more with an aerial attack, hoping it will enable the defense to open the field more and create bigger lanes to run.

And it was this exact passing attack which proved fruitful for the Sharks in Friday’s bout against the Citrus Hurricanes.

Despite a couple of early team mishaps, junior quarterback Fabian “2Fabe” Burnett would remain unfazed in the pocket, showing why this passing attack can be lethal by throwing for 86 yards and two touchdowns in the fourth quarter, both to junior tight end Cai Teague, to help the Sharks defeat the visiting Citrus Hurricanes, 35-7, in the Sharks’ “Pink Out BCA” game.

For anyone who attended this contest, they would be quick to admit the first half was a back-and-forth slugfest, with neither team being able to get a definitive edge offensively. NCT would be stopped on their first drive of the game at the Hurricanes 20, and their second drive ended with a high snap that senior running back Michael “Mike-Mike” Weston could not corral. Citrus would score immediately after, with quarterback Connor Bishop rolling out right and finding Zaire Wilcox uncovered on the opposing side of the field.

This was when the wheels came off for the Sharks. On the ensuing kickoff, sophomore return specialist and defensive back Kinyatah Morgan fielded the ball and raced through the Hurricanes for a 93-yard score. The extra point was no good, though, and Nature Coast would enter the intermission down by one, 7-6.

In the second half, Citrus went three-and-out, and Nature Coast would respond by taking the lead for good on a two-yard scamper by Weston with 7:20 left in the third. From there, the passing game got to work, as Burnett found his favorite target on two beautiful passes, one to end the third quarter and one in double coverage for the score, to put the Sharks on top 20-7.

Not being finished, Burnett and Teague wanted to put a final dagger in this contest, and boy did they ever. Burnett would find his favorite target down the far sideline with just over four minutes remaining for a 50-yard score, essentially putting the game out of reach. When asked about what he saw pre-snap, Burnett explained, “We ran a play-action to Mike, and the safety bit, which allowed Cai to get man coverage on a wheel route, and he made a great play.”

Nature Coast head coach Cory Johns said after the game, “They (Citrus) came out tough, and you could see it. They were what we expected would happen, and we had a couple of self-inflicted penalties in the first half. The game went as we expected it to; we just have to correct the little things. Our defense tonight was phenomenal; I don’t consider the score on them because we put them in that position, but our guys showed out for sure.”

On the utilization of the passing attack, Johns said, “He’s special, Teague. In practice it’s a little tougher to get the throws off, but when we’re in our methods, and if our pass protection can get that 1% better, we can make things work. We’ve all known about how good #15 is, and he’s finally being able to show how dangerous he can really be.”

The Sharks now have a week of preparation before they face off against district foe Hernando this Friday night at the Shark Tank. This game, while also the Sharks’ homecoming game, will also be a “Black Out” game, so the hope is all fans come out for both teams rocking the dark side of the spectrum. A win for NCT would essentially clinch the championship and a first round home playoff game against an opponent which will be determined later. “There’s always going to be emotion with Hernando, but they’re a good team. If we do what we’re capable of doing and are efficient, we’ll be fine,” remarked Johns.