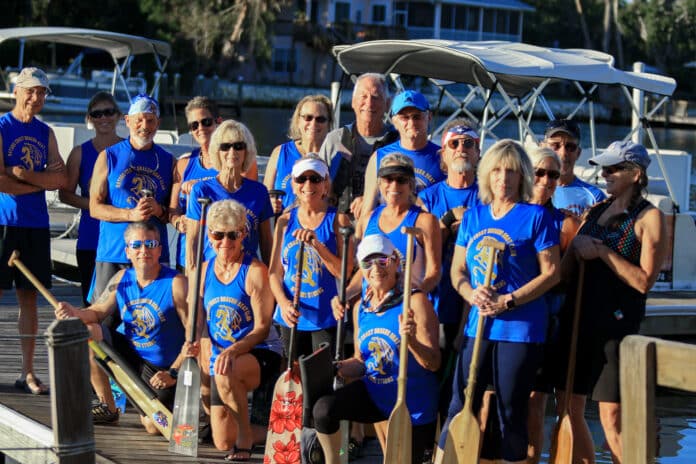 An old Chinese tradition is becoming a prominent activity on the waters of the Nature Coast and is drawing participants of all ages.  It is called dragon boat racing and combines the physical and rhythmic demands of synchronized rowing in a long canoe type boat.

The sport has come a long way since 550 AD, when there is evidence of boat racing being used as an exhibition sport in the form of a staged mock battle called  Jingdu (jeeng-DOO), which means “competitive crossing.” An event that was part race and part combat, these oared longboats filled with about thirty men would fight to gain the crossing of a river. Jingdu was a military recruitment training exercise for naval forces in the 800s after the imperial Tang dynasty collapsed. This practice was adopted by the new northern-based Song empire.

Throughout several centuries, this particular style of boat racing became a competitive sport in which the winners were promoted into the imperial navy. The boats were decorated like dragons, which symbolized imperial authority; as a result, other decorations such as birds, tigers, and other animals and designs were no longer being used and the competition took on the title of “dragon boat jingdu” or just “dragon boat competitions.”

To encourage tourism, the British-controlled government of Hong Kong began to develop dragon boat racing as a sport in the late 1970’s and over the next several years, other locations around the world began holding festival races.

According to dragonboathistory.com, there are a few legends about Dragon Boat Racing, but the most influential legend is the story of Qu Yuan, a beloved poet and advisor to the Chu Emperor.  Qu Yuan was exiled by the Emperor after advising against an alliance with the tyrannical power, Qin.  The Chu Court was ultimately destroyed by the Qin.  The distraught Qu Yuan took his own life by carrying a large rock into Miluo Lake.  As the local boatmen saw this, they took to their boats and set out to find Qu Yuan. They beat drums while they were rowing to scare off any fish, however his body was never found.  This is said to have happened in 278 B.C. The practice of racing to cross the river to find Qu Yuan became a tradition, for many, representing uncompromising principles, love of country.

The Nature Coast Dragon Boat Racing of Citrus County club currently has over twenty members, ranging in age from the mid twenties to late seventies, and has been actively participating in races since 2010.

On October 31, 2018 13 members of the Nature Coast Dragon Boat Racing club, met up at the Homosassa Riverside Resort in ‘Old Homosassa’ for a two hour practice. The club has been going strong for ten years and for the current president and coach of the club, Andrew Davies, new members become inspired by many aspects of this sport.

“I live on the water here, and I was in the backyard one day and I hear this boom, boom, boom sound. I see this boat going fast and paddling to the beats of the drum, and I said, I have got to do that, so I joined the team,” said Andrew Davies, currently the organizer, president and coach for the club.

That’s the day that began it all for Davies. For many other members, it’s not only finding inspiration but balance, strength and friendship.

“I think dragon boat racing is somewhat unique. When you’re out there you’re racing that’s the competition, when your off the boat it is really very collegial, everyone helps each other out,” said Davies.

“There are people in their twenties, seventies, it’s a very ecumenical sport,” said Mary McNeece Secretary for the group. She joined after her husband passed away two years ago and has been inspired by the camaraderie of the sport.

“I also find it meditative,” McNeece said. “Worrying about what is on your mind, you have to shut  down, think about the moment, the team, the rhythm and for someone that’s busy it’s helpful.”

“The dragon boat community itself … the sportsmanship is second to none and that is what actually drew me to this… it’s a family,” Lou Fay said. Fay, from Hernando, is currently the Vice President for the club.

“I have been doing this for four to five years all together, everytime I go out there’s something new that you learn. Either about yourself, your teammate, the way the boat moves… you learn something every single time,” Fay remarked.

On Wednesdays and Saturdays throughout the year, the club conducts strenuous practices, going over commands, synchronization of paddling, speed and rhythm all while traveling throughout the scenic surroundings of the Homosassa River. Practices can run up to 2 hours and can be demanding in preparation for upcoming races.

“It’s counterintuitive on everything you do, you have to unlearn what ever your brain has and redo it and turn it to muscle memory,” said Donna Egbert. She has been involved with Dragon Boat Racing for ten years.

“They main thing for any team is synchronization, it’s absolutely essential,” Davies said. “Everyone has to do the same thing at the same time, if not-  you’re bashing into each other, clashing paddles, it’s a mess.”

Depending on the race, there are two boats that participate in competition; ten row or twenty row. Each row has two paddlers; one left and one right. At the back of the boat there is the steersperson, a highly trained crew member whose main position is to steer the boat and call paddling commands. The steersperson is also responsible for the overall safety of the crew. At the front of the boat is the drummer. This crewmember is the most energetic member on the team as well as the one that has loudest voice. The drummer’s main goal is to keep the beat of the drum to the pace of the strokes and any off set drum beat may confuse the paddlers.

The crew is broken up into three groups, in front are pace setters who set the pace with their long paddling strokes. The paddlers in the middle are considered the engine. The heaviest and strongest paddlers are in the back. These paddlers have to keep the pace so that the back water flow doesn’t push up to the front.

The placement of the paddlers also are positioned by weight/experience and strength.

The senior women’s dragon boat racing team was organized in 2017 and they have competed in the Seniors Womens racing class for the past 12 months.

“Very, very proud of the team. They have been tremendously successful,” Davies said. “The women of the club are certainly the strength of the club.”

“If you want to get out with a great group of people and have the best workout that you could possibly ever have, have fun doing it [then] get out in the boat and [you’ll] feel so darn good about yourself..it’s that much fun,” said Jill Ceriani from Beverly Hills and a member since January 2018.

The Nature Coast Dragon Boat club is based out of Homosassa, which is just 25 minutes north of Weeki Wachee, FL. The club is opened to those that would like to at least see what is involved to become a member.

“Anybody that wants to join, we encourage it,’ Davies said. “We schedule beginners practices, and we do one on one coaching, which is very beneficial for beginners. We provide everything and if you want to try it…it’s free.”

Observing the members work as a unified team, hearing them laugh, seeing them smile, sharing memories and just enjoy being in the company of each other, that in itself would make anyone gravitate to this group, but what was really inspiring and motivating was witnessing people on the dock watching, cheering and seeing that “WOW” expression on their faces.

The Nature Coast Dragon Boat Club competes in festivals all year and will be competing during the Lake Hernando Dragon Boat Festival on November 10. Be sure to watch for my next article and photos from that event.

For more information about the group visit their webpage at : https://www.meetup.com/Nature-Coast-Dragon-Boat-Club or Facebook page: https://www.facebook.com/ncdragonboat/