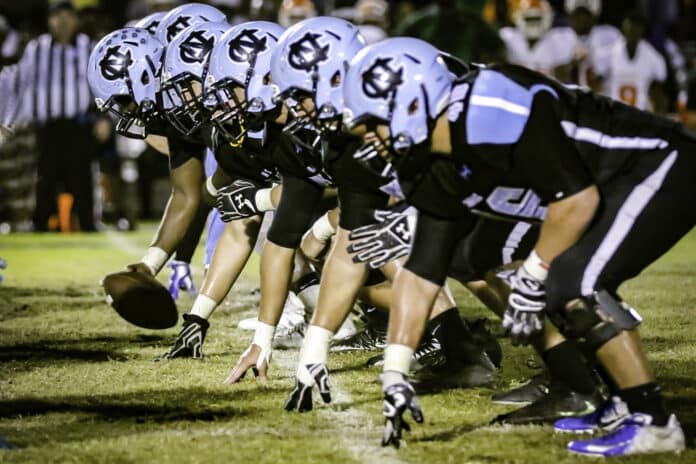 Coming into Friday night’s (Nov. 16) contest against the Baker County Wildcats, aside from attempting to advance to the Elite Eight for only the second time in school history, there was one thing on every member of Nature Coast’s players in pregame warmups: revenge. Last season, the Wildcats were in NCT’s place in the region, and NCT had to travel up to Glen St. Mary, only to be defeated 34-7 in the first round by the eventual Class 5A runner-up.
And while it took a while to happen, a very unlikely source turned out to be the hero NCT needed.

After stuffing the Wildcats on their last offensive possession, the Sharks would get the ball back with 1:06 left and would connect on an incredible 65-yard completion from junior quarterback Fabian “2Fabe” Burnett to senior wide receiver Shemar Lawson, setting up the first field goal attempt of the season by junior kicker Mateo Rivera, and he would convert, giving the Sharks a miraculous 17-16 victory.

“They’ve (Baker County) been bigger than everybody that they’ve played. But people have found a way to beat them, they were 7-4. And we’re 10-1. Well, now we’re 11-1”, Sharks head coach Cory Johns stated after the game.

Despite losing the overall yardage battle (327-322), the Sharks had more first downs than the Wildcats (13-12), recovered one fumble, and in a turn of events, were more disciplined than in previous contests (4 for 23 yards; Baker County- 3 for 15). The focal point in this contest, though, was the red zone defense. NCT converted their only trip inside the 20; Baker County went 1/5 with a fumble and two turnovers on downs, despite having more control in the middle of the field.

The Sharks got the opening score of the contest, riding Lawson and tailback Mike Weston for 71 yards before Burnett punched it in from a yard out.

The Sharks would respond right back before the quarter ended, as Burnett would find Lawson on a beautiful flea-flicker from 27 yards out that just went over the outstretched hand of the Wildcats safety. Baker County wouldn’t go quietly, however, and got Graham into the endzone shortly after the second quarter began to regain the lead.

Baker County had one critical chance to score a touchdown before the half ended, which combined with getting the ball to start the second half, would have almost ended the game. The word “almost” is used loosely here, because the Sharks became an impenetrable wall in the final minute, stuffing Carson Crawford right as the horn sounded.

Johns wasn’t about to mince that stand by his defense in that critical time: “It was huge. It would have been a huge turnaround if they scored.”

And after a scoreless third quarter in which neither side could really put this game out of reach, it was the fourth quarter that saw NCT prove their merit. On the last possession for Baker County, which was only possible after a costly interception thrown by Kinyatah Morgan on a trick play, the Wildcats aided the host team by getting a costly penalty on third down, especially knowing one first down would’ve ended it.

And that would turn out to be the difference. On that last possession that set up the game-winner, Johns said he saw something on film that he felt he could utilize if done properly: “When they played (district opponent) Clay and won 27-24, I saw Clay run this exact play we used on film, and the quarterback missed it but that post was open. And they reacted to it the exact same way I thought that they would,” Johns said. “Fabe did a good job of sliding in the pocket, finding him (Lawson) and putting it on the money. It was beautiful.”

For the Sharks, this win propels the squad into their second FHSAA Class 5A, region II final in school history. Because of their #1 seed, they will be the host school, and will be welcoming in the red-hot Citra-North Marion Colts at the Shark Tank this Friday night. The Colts, with an 11-2 overall record, made it to the final by defeating the previously unbeaten Zephyrhills Bulldogs, 40-21, forcing six turnovers in the contest. The winner of this game will advance to the state semifinal game on November 30th, so it remains to be seen who will represent the region.