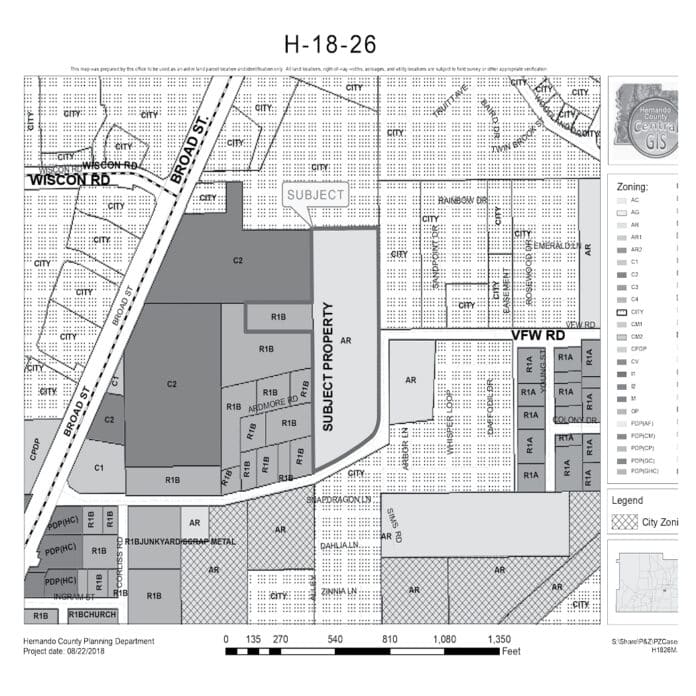 Several staff members of the Utilities Department received written or verbal commendations.  The employees were recognized by Utilities Business Manager Nancy Stopps-Libengood, who entered her memorandum of recognition into each employee’s personnel file.

In a letter addressed to Governor Rick Scott and Secretary of the Department of Environmental Protection,  Brian Armstrong of Southwest Florida Water Management District (SWFWMD) sent the following:

“Pursuant to subsection 373.536(6)(a)(4), Florida Statutes, each water management district is required to furnish a ‘five-year water resource development work program within 30 days after the adoption of the final budget. The Southwest Florida Water Management
District (District) approved its proposed 2019 Five-Year Water Resource Development Work Program at its Governing Board meeting held on September 25, 2018 and adopted
its fiscal year 2018-2019 budget at a public hearing held on September 25, 2018.

After receiving comments from the Florida Department of Environmental Protection (DEP),
the District will respond to the evaluation within 45 days. Any revisions prompted by DEP’s
evaluation will be incorporated into the final report that will be included as part of the District’s Consolidated Annual Report. The Consolidated Annual Report is due no later
than March 1, 2019, pursuant to subsection 373.036(7), Florida Statutes.”

3. Transmittal of Minutes From Spring Ridge Community Development District Board of Supervisors Meeting of June 13, 2018

The request brought to the board is for a change from AR-2 (Agricultural / Residential) to Planned Development – Single Family with deviations.  The location is at the northwest corner of Powell Road and Gloucester Road.  Planning and Zoning Commission (P&Z) voted 5-0 to continue the petition to December 10, 2018.  At the request of the applicant, Pianta reported that it is recommended that the board continue this petition to January 15, 2019.

This is a request to rezone from AR-2 to PDP-OP (Planned Development Project – Office / Professional) with specific C1 (Commercial) uses and a Congregate Care Facility with deviations.  The location is on the north side of County Line Road , approximately 100 feet east of Oak Lake Drive.  P&Z voted 5-0 to approve with modified performance conditions.

Tommy Raddick lives adjacent to the rear of the property discussed.  Raddick asked the commission about noise levels and abatements due to loss of trees as a buffer.  He also asked about a gopher tortoise population known to the area.  Pianta advised that a wildlife survey would still need to take place.

A 100-foot tree buffer will remain in place, and the building itself is expected to shield traffic noise from County Line Road.

This petition is to rezone from AR to R1B (Multi-family) with deviations.  The property is located at the north side of VFW road, approximately 1,550 feet east of Broad Street in Brooksville.  P&Z voted 5-0 to recommend denial of the petition.  The county staff recommendation is to approve the rezoning.   Assistant County Administrator Ron Pianta explained more about the petition.

According to Pianta, “Planning and Zoning’s actions were based on three concerns; at the time of the hearing, P&Z had not received any comments from the city of Brooksville … comments were subsequently received from the city on October 12, 2018.  The second concern was that of compatibility of 134 dwelling unit multi-family development located in an area that is primarily low-density, and the third concern was regarding traffic, and drainage issues on VFW road.

Pianta referred to correspondence from Bill Geiger, Community Development Director for the city of Brooksville.  In Geiger’s comments, the developer would coordinate with the utilities department to arrange services (water and sewer services from the city), a traffic analysis would be performed at the time of development, and the site should also be developed in accordance with water management regulations related to any concerns about flooding.

Geiger also indicated that the density and structure height of the proposal may be incompatible with the surrounding area.

Pianta reported that county staff modified their recommendation, reducing maximum number of dwelling units to 80.  The building height will also be restricted to two stories.

Commissioners John Allocco and Wayne Dukes asked about flooding issues in that area.  After some discussion of water management on the property, Allocco asked Director of Public Works Scott Herring, “Let’s say everything is designed properly … and it fails.  Who’s responsible for mitigation at that point?”

Herring replied, “It would probably be the county and the applicant for failing to maintain their water management system.”

Several area residents spoke to the commission to oppose the project, citing incompatibility with the neighborhood, flooding issues and even school bus access.  Brooksville Mayor Betty Erhard also voiced her opposition to the project.

Coastal Engineering President Don Lacey, who represents the applicant,  showed the low-lying areas of the property on the north and east ends, away from the existing subdivision and other homes.  Lacey also acknowledged the restricted traffic access from VFW Road.

Addressing the incompatibility of introducing a large-scale apartment complex into a neighborhood of single-family homes, some of which are exclusively in a 55+ community, Lacey said the building plan and road access could be modified, but the current submission would either need to be postponed or withdrawn and resubmitted at a later time.

The motion to withdraw the petition passed 5-0.

On October 18, 2018, Hernando Beach resident Sarah Hill appealed an administrative decision to deny her permit to construct a boat lift and dock adjacent to the perimeter channel abutting the Gulf of Mexico.

Hill’s permit was denied based on Hernando county Code of Ordinances, Chapter 8, Article 5 – Marine Construction Code, section 8-247.10, which states, “No dock or moored vessel shall significantly hinder navigation upon the waterways.”

During the 2.5-hour hearing, Hill and Port Authority Chairman Frank Santo showed diagrams, photos and videos of the property and surrounding area in question.  Hill asserted that diagrams and photos given earlier to the BOCC were not representative of her property with respect to the channel, and proffered her documentation to be entered into the record as well.  Several residents of Hernando Beach spoke in favor of Hill being allowed to build her dock, as well.

It was decided that the roof that was designed with the dock would cause a visual obstruction, so the council voted to approve the design without the roof, and stipulated that all parts of the dock be located outside of the channel.

The cemetery was named in the 1950s, administratively dissolved, and recently reinstated through Mason’s work.

Mason, who is working for the cemetery pro-bono, has requested a waiver for the entire amount of $1,226.40 for road repairs in the cemetery.  The commission commended Mason for his many hours of work.

The request was approved 5-0.

Zoettlein said that he was 100% sure that the Fiscal Year would end without the commission needing to borrow any money.  He presented the amendment to move money between funds to take care of those with low balances.  The commission approved unanimously.

Budget Analyst Bob Sorg gave his first presentation to the commission.  Sorg explained Capital Improvements as those that cost over $50,000 and have a minimum useful life of over ten years.  He further explained that projects completed in 2018 would not be a part of this presentation.
The Fiscal Year (FY) 2019 Five Year plan shows positive growth through 2023.  Sorg reported the budget for FY 2019 to be $67,162,449 and the five year budget to be $198,432,858.  There are 120 projects scheduled for FY 2019, and 208 over the five year period.
Sorg further broke down the projects by department:  Department of Public Works (DPW): 78, Hernando County Utilities Department (HCUD): 18, Airport Operations: 4, Hernando County Fire/Rescue: 2, Parks and Recreation: 2, Planning and Transit: 2, Solid Waste and Recycling: 8, Facilities Maintenance: 3, Hernando County Sheriff’s Office (HCSO): 1, Building Division: 1, Court Improvement Fund: 1
The Technology Drive / Telcom Drive expansion is listed in the FY 2019 Airport Projects list.  Also notable is the Anderson Snow Splash Park, shown in the Parks and Recreation list.  Deputy County Administrator Jeff Rogers added that the redesign of Fire Stations 5 and 6 will be a part of the FY 2019 plan.

1. Consent to Assignment of Ground Lease From Maria M. Herwich as Trustee of The Maria M. Herwich Trust of 2012 to Pearson Industries, Incorporated for Improvements Located at 15315 Flight Path Drive at Brooksville-Tampa Bay Regional Airport.

The Taxiway A Rehabilitation project is currently under design, and is expected to to be completed in the spring of 2019.  The next step is to put the project out for bid.  Daugherty explained that the pre-application is not a guarantee of award, but to put it into a system “to see how it competes.”  There are other airports vying for the funding.

The School Board has already approved the transfer.  The new ambulance is expected to have a 16-person capacity, and is to be used for evacuation purposes for those requiring an ambulance transport,  on-scene firefighter rehab (oxygen and other aid to firefighters with minor injuries during fire or rescue event), as well as any other large-scale event where multiple people would need to be transported.
Commissioner John Allocco asked about the $6000 cost associated with maintenance and insurance. Patella answered that the insurance cost of around $3500 was estimated from the School Board budget, and that the remainder is to ensure maintenance will not be under-budgeted.
Commissioner Wayne Dukes added that the cost of insurance for a vehicle with the primary scope of transporting people is higher by default.  He also said that in his experience, that vehicles with special purposes somehow require more maintenance that those used on a daily basis.
Patella reports that the converted ambulance will be most likely driven by someone at Hernando County Fire/Rescue (HCFR) who already drives an ambulance or larger vehicle.  The School Board has offered to provide training to the county for operation of this particular bus.
Dukes said that if an emergency occurs that is “bad enough” to warrant the use of this type of vehicle, then Patella may want to train Emergency Operations Center (EOC) personnel, since there may not be HCFR staff available during a large-scale emergency.
Dukes’ concern also is that the reason the School Board removed the bus from their fleet is because of increased mechanical problems with an aging vehicle.  Commissioner John Mitten also expressed his concern that the bus could be “a klunker.”
Patella assured the board that the bus is not being decommissioned due to problems with the vehicle, but because of the replacement requirements that the school board has in place, and that buses need to be recycled after a predetermined number of miles.  Patella also said, “(The school board) gave us this bus with the understanding that they may also have to use this bus (in an emergency situation), and that it’s a benefit for the entire community.”

2. Local Agency Program Agreement With Department of Transportation for Design of Deltona Boulevard Sidewalk Project From Elgin Boulevard to SR 50 and Associated Resolutions

2. Revision to Policy No. 23-03, Repair of Damage to Utilities Department Property

This revises current language to be able to charge contractors who damage water and sewer lines in the course of their work.

To be added to a future agenda.