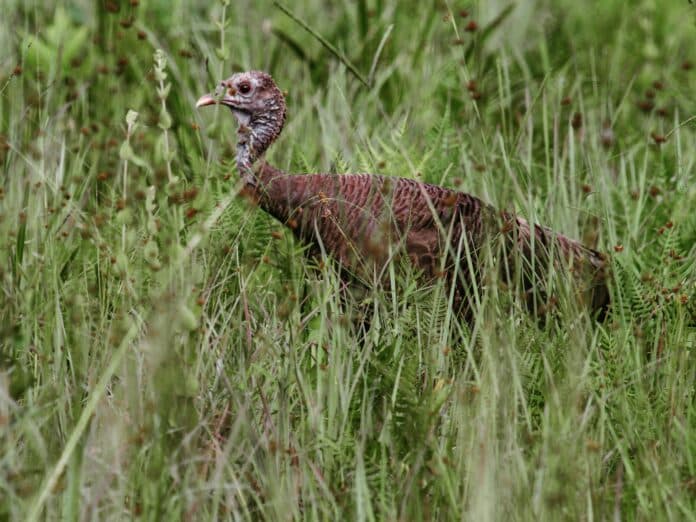 The Osceola Wild Turkey was named after the famous Seminole Chief Osceola in 1890 and can be found only in Florida.  These wild turkeys thrive in open terrain of longleaf pine forests, oaks and grasslands habitats.

Wild turkeys were once abundant in Florida. In 1860, it was estimated that there were more turkeys than humans.  Wild turkey populations declined throughout the country due to over harvesting and habitat loss, but populations remained healthy in Florida- due to the area’s inhospitable environment.

However, Florida turkey populations also began to decline in the 20th century due to increased development.

From 1949 through 1970, over 5,000 wild turkeys were trapped, banded and released into suitable habitats throughout Florida. Since then, habitat management and protection have become a primary focus for maintaining or improving Florida’s turkey population.

Wild turkeys are among the “prey species” which contributes to a healthy natural food source for many wildlife species. The turkeys have a high rate of reproduction, therefore a number can be eaten without negatively affected the overall survival of the species.

Breeding begins in late winter and lasts through summer. Males start displaying in January and February. Males are capable of breeding with multiple females, which helps with higher reproductive rates.

Nesting begins in late March and can last until June. Hens can lay 10+ eggs and have a strong social bond between them and their poults, which may increase their chance of survival, however only 30% will survive beyond two weeks of age, due to natural predators. The turkey’s overall life expectancy is still only about 18 months

The wild turkey’s main food sources are acorns, seeds and berries. They supplement their diet with insects.

The wild turkey is a simple species that fulfills an important role in the natural environment. They also wobble when they run, and that is just plain cute.