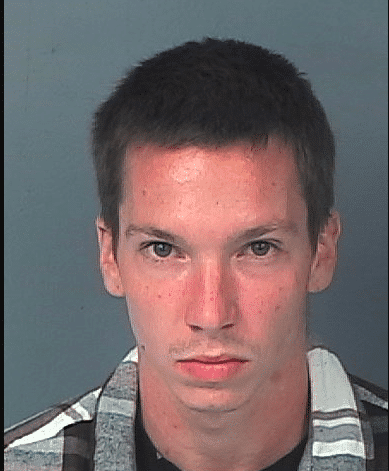 On 12-05-18 just before 4 p.m., Hernando County Sheriff’s deputies were called to the Kohl’s department store on Aerial Way in Spring Hill regarding a Shoplifting complaint.

A Kohl’s loss prevention employee contacted the Hernando County Sheriff’s Office to report a retail theft in progress. The employee was monitoring the suspect as the suspect stole two pair of shoes from the shoe department.

Deputies spoke with the Loss Prevention Officer who advised that the suspect, later identified as Dominick Breedlove, entered the store at approximately 3:20 p.m. and proceeded to Human Resources for a job interview. Upon leaving the job interview, Breedlove walked over to the shoe department and scoured every pair of Nike shoes, looking for a pair without a security tag.

Back at the shoe department, Breedlove placed the first pair of shoes inside the Kohl’s bag then selected a second pair (still in the box). With both pair of shoes in hand, Breedlove headed to the front of the store, passed all points of sale, and left the store. Breedlove made no attempt to pay for the shoes.

Breedlove told deputies he was going to gift the shoes to his mother.

Dominick Breedlove W/M DOB/03-12-1994 of Hudson was transported to the Hernando County Detention Center and charged with Retail Theft. His bond was set at $500.

Breedlove was not selected for the job at Kohl’s.