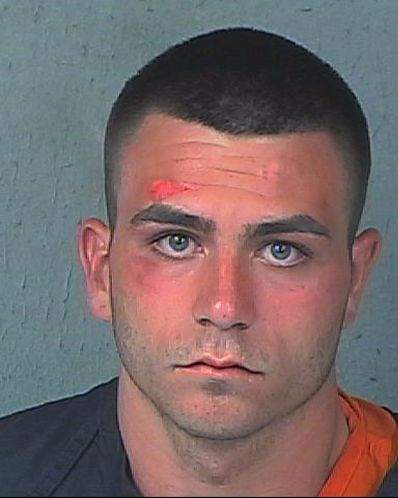 On 12-05-18, the defendant, Brian Murphy, entered a plea deal to all six counts as charged.  Murphy was sentenced to LIFE IN PRISON for the heinous crimes he committed on March 27, 2014.

Murphy’s charges were as follows:

Sheriff Al Nienhuis and the men and women of the Hernando County Sheriff’s Office would like to thank the men and women at the State Attorney’s Office of the Fifth Judicial Circuit for working so closely with us to bring this violent criminal to justice.

On 03-27-14 at approximately 12:38 a.m., the Hernando County Sheriff’s Office received a
9-1-1 call from an individual at the Atria at Evergreen Woods, located at 7030 Evergreen Woods Trail in Brooksville.  The caller advised the 9-1-1 operator there was a suspect on scene beating up the security guard.

Deputies were promptly dispatched to the scene.

Within four minutes, the first deputy arrived on scene and was directed to the location of the disturbance.  The deputy immediately engaged a white male suspect and took the suspect into custody.

The on duty security guard at the Atria at Evergreen Woods was fighting with the suspect when deputies arrived.

Witness testimony revealed that the suspect, Brian Christopher Murphy (a weekend security guard at the Atria at Evergreen Woods), entered the facility shortly before being spotted by a nurse who alerted security.

While inside the facility, before being detected, Murphy entered the rooms of two elderly residents and battered each resident with a blunt object.

Miriam Lepp, 88 years of age, and Joseph Giambrone, 83 years of age, both residents at the Atria at Evergreen Woods, were battered by Murphy.  Both were transported by Hernando County Fire/Rescue to a bay area trauma center with life threatening injuries.

Jonathan Sousa was the security guard on duty at the time of the incident.  Sousa immediately engaged Murphy when called upon by the nursing staff.  His immediate action prevented further injury to residents and staff until the arrival of law enforcement.