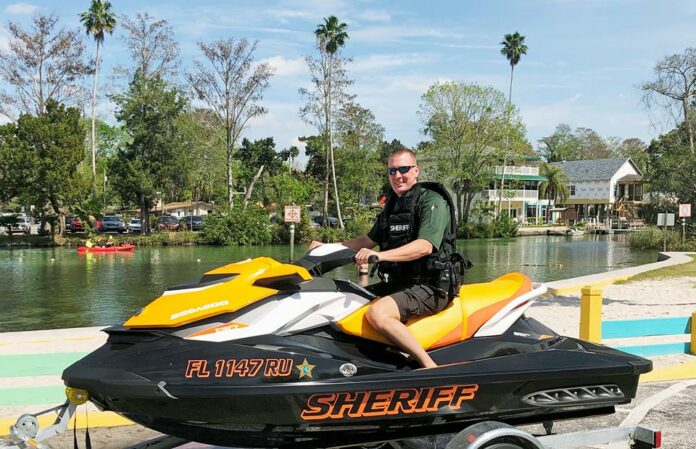 The Hernando County Sheriff’s Office officially expanded its Marine Unit today with the addition of a full-time deputy dedicated to patrolling the Weeki Wachee River.

The additional deputy was made possible by Guest Services, a kayak rental vendor that operates on the grounds of the Weeki Wachee Springs State Park.

Guest Services recently entered into a contract with Hernando County to fund the new marine deputy, which the Sheriff’s Office agreed to fill.

While Guest Services is funding the new marine deputy, the Sheriff’s Office is paying for a new personal watercraft, trailer, and the various other equipment needed by the deputy to patrol the river.

The new Marine Deputy assigned to the river is Deputy Steve Snell, a 30-year veteran of the Hernando County Sheriff’s Office.

He will patrol the river 40 hours per week, which spans from Bayport to Weeki Wachee State Park.

Sheriff Al Nienhuis said, “This new marine deputy, who is exclusive to the Weeki Wachee River to provide law enforcement, was made possible through our partnership with the kayak vendor at the Weeki Wachee State Park, the Board of County Commissioners, and the Sheriff.”

“This deputy’s salary will not cost the local taxpayers any additional money. Here is another example of county officials coming together to implement creative and cost-effective solutions. I am excited that this has been accomplished before the upcoming boating season,” the Sheriff stated.