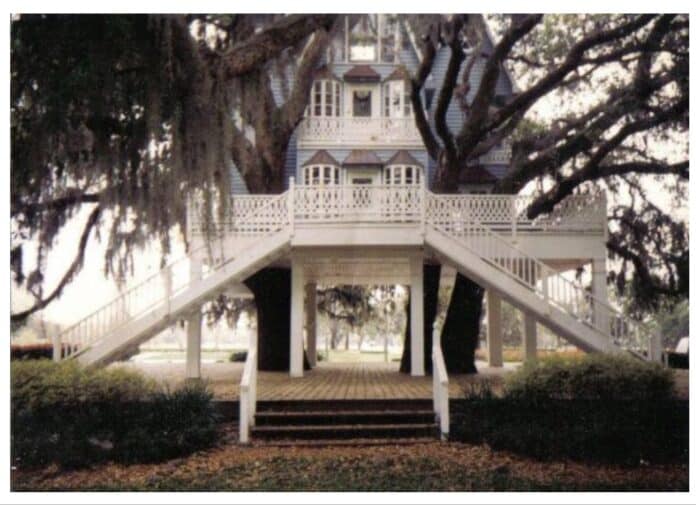 For about 30 years, a mystical little fairy-tale house stood in the midst of a forest, right here in Hernando County. Some have even referred to its similarity to Christopher Robin’s Hundred Acre Woods, enticed with a magical child-like feeling.

It’s vaulted ceilings once pointed directly to the warm sunlight, encompassed with floor-to-ceiling windows, portraying a castle-like picturesque image for many admirers, especially young children. The magical little house was even painted the same hue of blue as Cinderella’s ballroom gown.

The Victorian-style tree-house was built by the well-known aviator and industrialist, James Talmage ‘Tokey’ Walker in the mid-1980s, at 17346 Powell Rd, Brooksville, Florida, just north of the Hernando County airport. The property was also home to the M.I. Nursery.

As the story is told, Walker was born in 1911 and spent his childhood and teenage years enthralled with airplanes. Thousands of hours spent on building and modeling airplanes, he flew his own plane in the 1930s. There were not many 20-something-year-old young adults who did this. Come to think of it, there are not many young adults who build and fly their own planes in today’s society. As Peter Desoto wrote, “He never did the expected.” (Smithsonian Air and Space Museum).

Some can say the same about another famous engineer who possessed a child-like soul himself, Walt Disney.

In learning about Mr. Tokey Walker and the majestic tree house he built for his grandchildren in Brooksville, it is striking how similar his life was to Walt’s.  Walt Disney was just 11 years older than Mr. Walker. Both grew up selling newspapers as young boys. Both witnessed the effects of The Great Depression. Walt, born in 1901, witnessed the economic downfall in his 30s, while Walker was in his 20s. Both were very young men to be facing a decade of severe economic decline (1929-1939 The Great Depression). Yet, it did not stop either of them from pursuing or building their businesses and well-known masterpieces.

When he was 34 years old, Walker moved to Clearwater, FL in 1945 with his new wife, Sarah. They moved closer to their best friends (Mr. and Mrs. Robert Word, who had a new baby at the time). Following World War II, Tokey and Robert were pilot instructors and ran the Clearwater Airpark. They started a business in Clearwater, today known as J.T. Walker Industries, a company with multiple manufacturing plants in the U.S. (Bloomberg.com).

According to Mr. Peter DeSoto, While Walker and Robert Word were running the Clearwater Air Park, they began producing insect screens in the rear of an airplane hangar there.  The outfit grew and eventually became one of the first companies to mass produce aluminum grilles and registers for central heating and cooling systems.

In 1945, Walt Disney was just getting his feet wet producing live-action films and documentaries in the studio. But keep in mind, Walt Disney World (the one we know here in Florida), was not developed until the 1960s. Walt referred to it as “The Florida Project.” Sadly, Walt died in 1966, before being able to see the opening of his Florida project. Opening day was in 1971, with The Magic Kingdom being the first to open its doors to the public. With about 52 billion visitors annually, Disney fans are certainly attracted to Walt’s Florida project.

Tokey’s remarkable treehouse sparked the imagination.  Although it is now gone, demolished in 2015, after years of neglect and vandalism, it generates interest still to this day.  Many artists and admirers have preserved its beauty and majestic style in multiple photographs available to the public online, and for Hernando County citizens for viewing.

Who knows, maybe another dreamer will come along and build their new dream here, in Hernando County, once again.

If you’d like to view photos of the tree house shortly before it was demolished, go to abandonedfl.com/brooksville-victorian-treehouse/

On flickr, photographer Mike Woodfin has some nice photos as well.