“Triumph and Tragedy,” theme of this year’s history fair 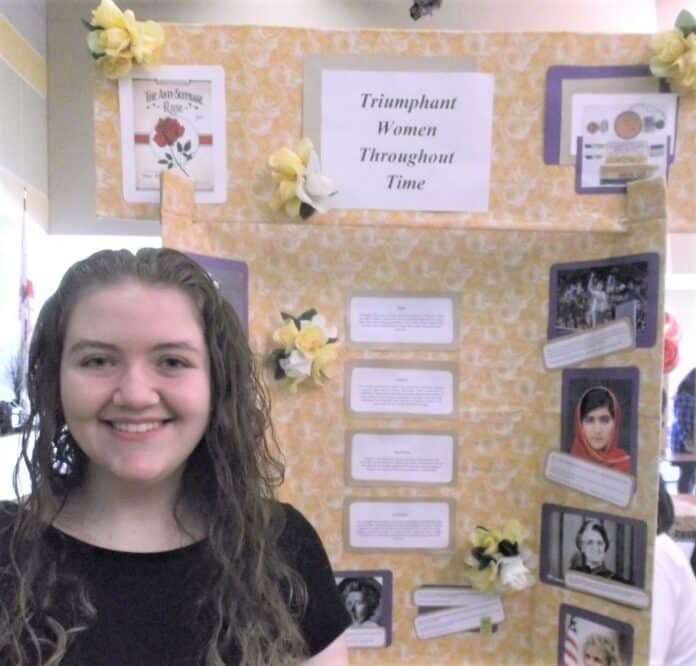 Students in Middle School and High School presented their projects in a number of ways. Some did a research paper, others created a website or prepared a documentary. A number of other students displayed exhibits using pictures and text, while others did a performance about their topic. The students could work individually or as a group. Individual and group projects were separate and projects were divided into two categories for the purpose of judging – Junior (sixth through eighth grade) and Senior (ninth through twelfth grade).

The judges were made up of an eclectic group of people from the community. Jan Piper, whose son competed in the History Fair when he was in school has been a judge for eighteen years. For Cheryl & Dave Rowlands, retirees who live in Timber Pines, this was their first year as judges. Terence Truax, a freelance writer and journalist, competed in the Fair when he was a student here in Hernando County.

Projects were judged on historical quality, how well they related to the theme, the amount and the kinds of research that went into the project and the clarity of the presentation.

There was a large variety of topics covered and  very creative depictions of the subject matter. For example, in the Junior Group Division Jayden Doctor, Kayla Doctor and Joseph Wycoff created an elaborate exhibit of The Great Wall of China. Their efforts garnered them first place. Allan An’s documentary entitled “Triumph of the Will: Leni Riefenstahl’s Filmmaking Techniques and Contribution to the Nazi Party,” a film about the woman who promoted Hitler’s propaganda, won first place. Ruby Silver, a student at Springstead High School did an exhibit on “Triumphant Women Throughout Time.”

Riley Staller, Hunter Bishop and Addison Staller  took first place in the Junior Group Division for their website entitled “Golden Determination: The Triumph and Tragedy of Wilma Rudolph.” The website depicted the story of Wilma Rudolph, an African-American woman who was a world-record-holding Olympic sprinter.

“We picked this topic because we all play sports, “ Hunter stated.
After the judges finished looking at the projects and determined first, second and third place in each division the winners were announced at the end of the afternoon.  Top students will go on to compete at the state level.