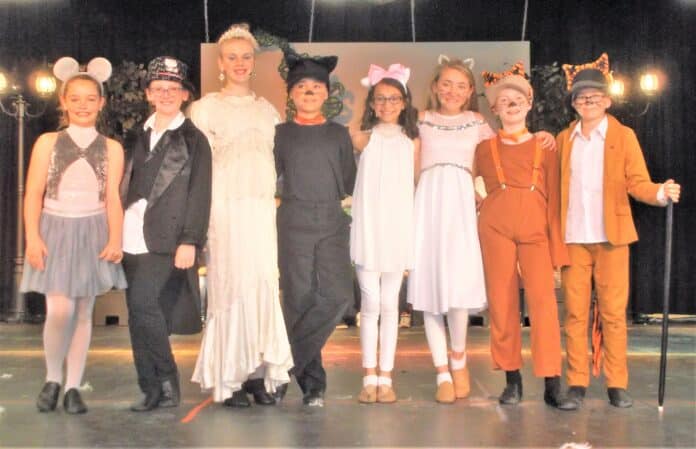 If Walt Disney were alive today, I’m sure he would have been pleased with Chocachatti Elementary School’s adaptation of his animated musical comedy, “The Aristocats.” The play tells the story of an elderly rich woman, Madam, who decides to leave her wealth to her pet cats when she dies. This sets a plot in motion by her nefarious butler, Edgar, to kidnap the cats and send them to Timbuktu so he can inherit the money.

Sixty third, fourth and fifth-grade children made up the cast and stage crew. Ms. Rhonda Bowers, the dance instructor at Chocachatti, handled the choreography. Drama teacher Irmarie Kraft directed the performance and music teacher Nancy Kraus was the musical director. The trio of teachers worked tirelessly, both at school and outside of school hours to make the show a success.

“The kids this year were very focused and very into their characters. Our main characters have been very dedicated and committed. The stagecraft kids worked really hard, also,” Ms. Bowers stated.

As in several previous shows, Ana Rodriguez, grandmother of one of the children, volunteered to make most of the costumes and some of the props.

“We could not do the show without her. We spent hours with her at fabric stores picking out what we wanted for the show and creating ideas,” commented Ms. Bowers.

The six months spent rehearsing was evident in the acting and the way the children performed the songs and intricate dance steps at the opening night on Thursday, March 13. There was a buzz of excitement backstage as the students prepared to go on stage. Almost by magic, they were transformed into cats, dogs, a mouse and even a couple of geese with the aid of makeup and colorful costumes.

Skylar Young, a fifth grader, played one of the main parts. She was Duchess, the mother cat.

“You have to memorize your lines and that was kind of hard and you have to know where you’re going [on stage],” Skylar commented.

“I loved that I was able to make all these kids in the audience laugh,” stated Abigail.

Gabriella Barna, who played the part of Marie, one of Duchess’ kittens, stated. “I liked learning my lines and getting to work with the rest of the cast.”

Luke Redmile, played O’Malley, who helps rescue Duchess and her kittens after Edgar kidnaps them.

“It was a little hard learning the lines, but I’ve been practicing since September,” he remarked.

Chocachatti has a long history of staging professional-quality musical theater. The success of this production, as in past years, was not only due to the hours spent by the teachers and students in rehearsing but also by the supportive parents and families.