Can anyone beat Hernando softball? 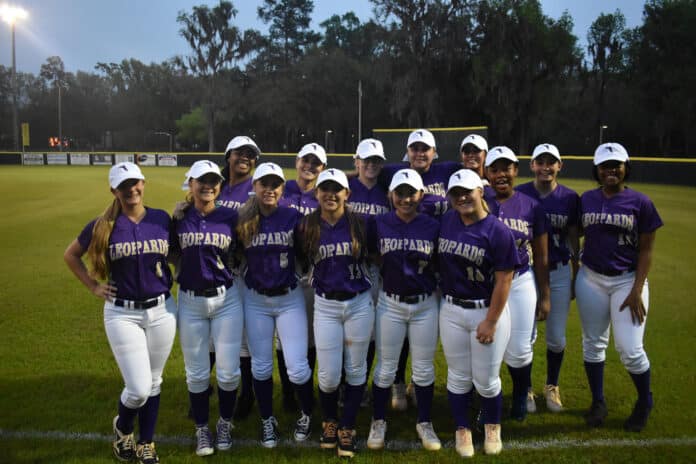 BROOKSVILLE- 21 games into the 2019 season and there’s one thing for certain about Hernando High School’s varsity softball team: they are a tough bunch to defeat.

Hernando plays in Class 5A, District 7 and has dominated its district play schedule throughout the entire season. The Leopards currently own a record of 11-0 playing opponents in 5A-7. The district rival is Nature Coast Technical, whom is currently sitting at 12-9 on the season. To say that Hernando is the favorite to win the district would be a little bit of an understatement to say the least.

The Leopards will play out the remaining five games of the season with contests coming against Wesley Chapel Cypress Creek, Springstead, Weeki Wachee and close it out in a highly anticipated matchup against New Port Richey River Ridge. The last game of the season will for sure bring a playoff-type atmosphere as both teams are ranked in the state in Class 5A and could see each other in the postseason.

You take a look up and down the Leopards’ lineup and it’s hard to find many, if any, weaknesses with this particular bunch. Hernando is setting some strong season statistics and their hitting and pitching have been more than impressive. The team has an overall earned run average of 0.49 and as a club, the Leopards have belted 20 home runs and 34 bases stolen. Those numbers could balloon in their final four games left.

Who are the girls that have really made this season one to remember for the Leopards? You’d have to start with the pitching, which has night in and night out stifled opponents. Senior Ali Shenefield leads the team with a record of 18-1 and has an ERA of 0.45. Shenefield has been the heart and soul for Hernando and she’s also racked up an amazing 254 strikeouts so far.

At the plate, it’s been the home run hitting abilities of senior Madyson Lamp and sophomore Olivia Townsend that have really elevated the team’s offense on a nightly basis. Lamp leads the team with seven home runs and Townsend is sitting right behind her with five. The two combined for 12 of the team’s 20 home runs on the season and figure to be crucial here heading into district play.