From a Garden to Frazier Farms 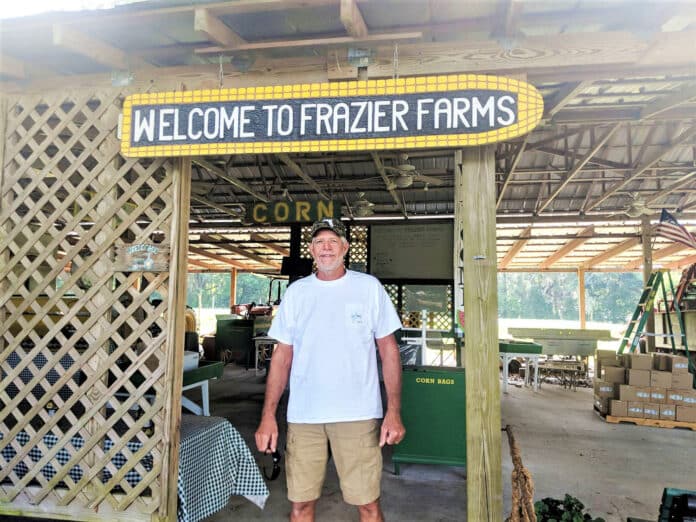 Frazier Farms is run by David Frazier and Sharon Vance. David explained that Frazier Farms is a 12 acre 5 and 10 cornfield meaning that they have corn in May and October usually farm-fresh starting around the middle of the month. To have corn for several weeks they have to plant the corn around 10 different times. This spring they should have about 3 and a half weeks of corn starting in the middle of May. Sharon Vance updates the Facebook page regularly, so that is the best way to keep up to date.

David Frazier says that he only has three days to pick the corn once it is ready. If he starts to pick before that, the corn does not have as much flavor and after that, the corn can become tougher and starchy. They usually pick the corn by 9 am when the corn is still cool from overnight. They grow similar varieties for most years and do not grow any GMO corn.

Corn in the grocery store has to picked and transported, warehoused, and then transported again to your local store. For the convenience of getting all your food in one place, you are foregoing optimal taste. To allow for time for all this transportation the corn usually has to be picked a little before it is fully ready, so it is ready when it is in the store.

The origins of Frazier Farms can be traced to a garden on a lot off Hammock Road in 1973. The  Frazier family come from an agriculture background and started a garden. They grew more corn than they could eat, so they gave their largesse to Tom Varn who distributed it to teachers at Hernando High. Tom told David’s father that he could sell all the corn he could grow if he would grow it.

This year they are growing white corn similar to the white silver queen which was his father’s signature corn. The white corn is great creaming corn.

They also sell blueberries, watermelons, and vegetables from other growers at their farm stand as well as some of their own branded products. They have specialty sauces, relishes, salsas, and jellies all with the Frazier Farms brand.

If you are having a spring cookout Frazier Farms’ corn is a wonderful addition. It is awesome to see the surprise on someone’s face when they try Frazier Farms corn.

Leslie Stein
Leslie Stein has over 35 years experience as a Speech-Language Pathologist working with neurologically impaired adults. She received her undergraduate and graduate degrees at the University of South Florida in Speech Pathology.
Share
Facebook
Twitter
Email
Previous articleMan Arrested for Shooting Girlfriend in the Back
Next articleUpdate – Arrest Made – Spring Hill Man Sought for Dragging Dog Down Roadway
RELATED ARTICLES
Uncategorized